Irish Women of the World: Powered for progression in law and business 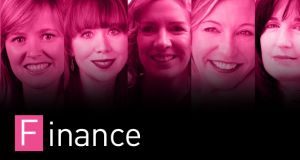 Working with PwC’s Capital Markets team, McNamara is currently focused on how emerging technologies (blockchain, robotics) can be harnessed by banks to drive productivity and innovation.

Previously a managing director at Goldman Sachs and Morgan Stanley, McNamara has also been a partner at Capco consulting firm. Born in Mullingar, she moved to Donegal at age 10. She took a degree in European business studies and French at the University of Ulster in Coleraine and on graduating in 1994, got a a job offer from Barclays’ Bank in London. Initially, she found it difficult to assimilate into what was at the time a very British and male-dominated bank.

By contrast, upon joining Goldman Sachs three years later, she immediately felt she belonged, thriving in the “aggressively meritocratic” culture. She spent several years in Asia for the firm, opening up branches in Taipei and Sydney. In 2008, she moved again to Morgan Stanley to help the bank transform itself in the wake of the financial crisis.

McNamara has two daughters and a son and and lives in Brooklyn, New York.

A big theme for McNamara is that of giving back. She believes this is especially important when working in the financial sector. She serves on the board of the New York Women’s Foundation (one of the largest funds in the world dedicated to women and girls). She wants her children to be aware of her philanthropic work and to understand the wider world. Her eldest daughter (Ciara, 10) will accompany her on a trip to Haiti with Goal at Easter.

To what extent does she think it is becoming easier for women to succeed in her field? “The evidence shows that women are still underrepresented in the financial services sector. This is not only a problem of access, but also one of pipeline . . . Are women showing up? We need to inspire them.”

What would she say to someone at the start of their career in this area?

“Be yourself as a leader. Come as you are, do as you can. Be authentic. Be brave and bold.

“Find a mentor (my own mentors have mostly been men). Be relevant to them, deliver and demonstrate a point of view.

“In terms of planning your career progression, look at what you have not done – then do something about it or you risk staying at the same level. A career is like a game of Lego – you need to build as you go along. I moved into the area of consulting in 2015, in order to gain experience of working across the whole industry and help traditional banks better leverage human capital and new technology to drive more efficient, customer-centric models.”

Trinity graduate Tully is an investment manager at Statoil Energy Ventures, a corporate venture capital fund investing in new energy solutions. She joined Statoil, a Norwegian oil and gas company, in 2013 as a senior strategist within the corporate strategy unit. Prior to this, she spent three years as an oil and gas consultant with IHS CERA, based in London and Brazil.

Tully started her career with Enterprise Ireland where she worked as an international trade adviser in London, managing a portfolio of more than 120 renewable energy companies.

As if that weren’t enough to keep her busy, she is also vice-chair of the London Irish Business Society (LIBS), a London-based business network for Irish professionals. With more than 4,000 members, the network provides a platform for the business community to get together and address some of the problems facing the Irish economy, and the businesses that exist within it.

Tully joined the LIBS board in March 2010 and has since held a number of positions across sales, sponsorship, event planning and finance.

“The most obvious route into the energy sector is the technical path but there are many other opportunities for other professions including legal, CSR, finance, business development, strategy, communications etc.

“Having an engineering degree is an excellent way to open doors into the energy space. I always say that if I could pick my university courses again, engineering would have appeared in my top three choices. An engineer can always move from the technical to commercial path. It is far more difficult for a non-engineer to move to the technical path. If you look at the profiles of senior management across the major organisations, the majority of them started in technical roles and later transitioned to commercial or leadership roles.

“Over the past decade, more women have taken on leadership roles within energy companies, proving that they are just as good at doing these jobs. The main thing is to be enthusiastic and interested in the energy sector.”

“When I first started my career, someone suggested I get a mentor; someone experienced from outside my team or company to speak to about my career path, how to get to where I want to go and that might be able to help me get there. The second piece of advice was that their time is precious so don’t waste it. They have agreed to give you some of their time, don’t disrespect them by arriving unprepared.”

A globe-trotter from Galway, McMonagle is a vice-president at The Carlyle Group, one of the world’s largest private equity and alternative investment firms. Based in Washington DC, she works in fund management for Asia and emerging markets. Prior to joining Carlyle, McMonagle was a director at KPMG in Chicago and spent 12 years advising clients on international mergers and acquisitions in the private equity and real-estate sectors. She also worked on assignment for KPMG in Buenos Aires: “I love working on business transactions in diverse cultures, whether that is Latin America, Europe, Asia, or the US.”

McMonagle’s career began in 2001 with Arthur Andersen, and subsequently KPMG in Ireland, following a law degree from Queens and a diploma in arbitration from UCD. Keen to keep up her Irish roots, she is a founding member of Irish Network USA, sits on the board of Irish Network DC and is a member of the Ireland Funds’ Young Leaders Steering Committee (DC).

“You will excel and succeed when you are truly interested in your field. Don’t be beguiled by jobs simply because they have a high points requirement or seem the best paid. I’ve liked all my roles to date because they are intellectually challenging and require me to think creatively when the stakes are high. Every time I take a new role, I need to raise my game. I always thought I’d be a lawyer but I realised that a career in business was more mobile and people seem to appreciate the different perspective I bring with a background in law, accounting and tax.”

“The most significant traits that a woman needs to succeed are the ability to advocate for herself and ask for opportunities. Those traits apply equally to men and women but men are more likely to promote themselves and their achievements in order to get ahead.”

Originally from Rathfriland, Co Down, Sands is an associate at US law firm Foley Hoag's Washington, DC office. The firm represents public and private clients in a wide range of disputes and transactions worldwide.

As a member of the Sovereign Representation and International Litigation & Arbitration groups, Sands’ practice is focused on public international law and investor-state arbitration, where she acts for sovereign states and their state-owned entities in lawsuits lodged by multinational corporations.

This is an increasingly powerful field of international law, where foreign investors can sue governments for billions of dollars. Sands provides advice on a wide range of public international law issues, including maritime entitlement and maritime boundary disputes, as well as the law of sovereign immunity. One of the more high-profile cases in which the firm is currently engaged concerns legal proceedings against China on behalf of the Philippines over maritime entitlement claims in the South China sea.

Prior to joining Foley Hoag, Sands worked in the dispute resolution department of an international law firm in London, the Office of Legal Affairs of the United Nations in New York, the American Society of International Law, and the European Commission in Brussels.

She is a graduate of Queen’s University, Belfast where she studied law with French. She is also proficient in Spanish, having taken the subject for her A levels. “The ability to work and converse in these languages really helped me gain a foothold in international law.”

“My mentor at my previous law firm in London, the late David I Shapiro, taught me the importance of clear, succinct legal writing. I would spend countless hours working on a single paragraph for him, to make it sure it was just right. ”

Initially, Garrett found herself front and centre of Ireland’s dotcom boom, working in the Fintech start-up space. Now, things have some full circle: starting out as a specialist in insolvency law during the last economic downturn, she was heavily involved in the management function of Irish law firm Arthur Cox during the “very challenging” period in 2009.

She lives in London with her husband Dean and three children, and is a partner in Arthur Cox, where she runs run her finance and corporate transactional practice from its London office. As a sideline, she supports Irish fashion designers broaden their markets outside of Ireland.

“I don’t believe that women do have to be more talented or work harder than men. Women and men face similar challenges. The key ones in my view are to try to identify your strengths and weaknesses and play to strengths and compensate for weaknesses. It takes guts and self-awareness to do this, and to act on it. There are some situations that will suit women better than men and vice versa. The trick is to find what your strengths are and go for them.”

“A key piece of advice I gathered is essentially don’t give up. And that it is by keeping going when things are tough that ultimately bring you to success much more quickly than you ever thought. I think a positive frame of mind when faced with challenge, coupled with tenacity, determination, hard work and bit of luck see you a long way. A little bit of talent helps too! Remember, most ideas are good ideas. It is the implementation (and sticking the course) where they fall down most of the time.”