India Knight: ‘I had a free-floating anxiety around the menopause’

The Sunday Times columnist doesn’t hold back in her book about middle age and the menopause. Nuggets include the best person to go to for Botox and why middle-aged women shouldn’t go on top 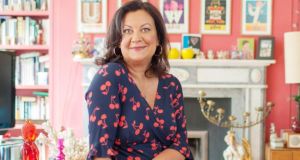 Knight is against middle-aged women getting on top during sex. ‘Put a mirror on the floor and straddle it. Now look down. Yep. That’s the view.’ Photograph: Graham Jepson/Writer Pictures

India Knight is running late for this phone interview. It takes three calls to get her. “I just popped out to Marks & Spencer, and the traffic was terrible,” she says.

Which makes sense because Knight specialises in the rush of prosperous, modern womanhood. Her columns in the Sunday Times are clarion calls of, well, clarity. In a confused world, Knight has very firm opinions. She also has a column about cosmetics (which Nigella Lawson had some years before her), to which the same rules apply.

It isn’t a very long road from Mac mascara to Nivea face cream via any product by Charlotte Tilbury (she is a big Tilbury fan), and Knight doesn’t pretend that it is. But she is an authoritative companion.

When I said that I was interviewing the columnist, the reaction from females of my acquaintance was very strong. “I love her,” said my mother. “She’s a realist.” A friend has been putting jojoba oil on her eyelids on what she believed to be Knight’s advice. “No, that’s not me,” says Knight. “I’m very pro-coconut oil.”

Now she has written a book, In Your Prime, about the menopause and life after the menopause. It is, she says, strange but true that menopause is an underexplored subject, and she knows why. “I had a free-floating anxiety around it.”

She knew that women in their 40s (Knight is 48) don’t want to talk or even read about an event that is just around the biological corner. Then a woman stood up at a reading and said that she had been going through menopause for 17 years. Most of the women present, she writes, went “ashen with horror”.

“I just thought: Jesus. I had thought that the menopause was going to be slightly annoying . . . ”

She realised that for no other biological event are women so wilfully unprepared. So she went into research mode. Only one chapter of the book deals with the biology of the menopause. She says that many women in their 40s have told her “they had to force themselves to read it”.

There is a great deal of very specific advice here. From the best person to go to for Botox (drfrancesprennajones.com) and the best bed to sleep in to coping with divorce ( she is very brisk on this: stay pals), infirm parents and teenage children.

Knight acknowledges that much of the advice involves shopping. She is a spender, and makes no bones about being “fired by not one but two accountants”.

“I have terribly high overheads, and three quite expensive children. Although nowadays most of my money goes on holiday cottages on the coast. I’m working my way round the coast of the British Isles.”

The quality of the advice varies. On the one hand, on the subject of grooming, Knight says that “you’re the woman feasting in her onesie, not caring about stains”. She herself loves a onesie and Ugg boots.

On the other hand, amid all the recommendations for Decléor oils and Urban Decay eye primer and the Philips Sonicare toothbrush (she is fanatical about teeth whitening), it emerges that Knight is against middle-aged women getting on top during sex.

“Put a mirror on the floor and straddle it. Now look down. Yep. That’s the view.” And that’s on page three, in the introduction. Not very helpful to the over-40s. Or even very logical.

Sources close to The Irish Times – well, not that close – report that gentlemen, and indeed ladies, have other things on their minds than the woman’s double chin at that point in proceedings. Why can’t everybody just take their glasses off and have a good time? It does seem an awful thing to say.

“Well, of course you don’t care, if you’re happily ensconced in a loving relationship,” says Knight, tactfully. (“Like who?” says my friend acidly, when I relay this to her.) But if you’re back on the dating scene in your 50s, “it might be a handy tip”.

The best chapter deals with the care of teenagers and elderly relatives. There isn’t even an attempt at discussing whether or why women mostly end up as the carers. They just do. But there’s a lot of sound understanding of what it is like to be solely responsible for a failing family member.

Knight’s account of her once brilliant father’s dementia, and of her anger at it, is remarkably vivid. The fact of the matter was that, although she hadn’t lived with her father since she was two years old, she had to pay for his care.

“Well, his sister chipped in,” she says now. But Knight was left with the bulk of the expense, because she was her father’s only child. “Officially, I always had strong suspicions that there might be others, because he was a great shagger.”

Her father had been treated for prostate cancer, and Knight thinks the drugs triggered his dementia. This sounds mad, she says, and she doesn’t want to make too much of it, but she is convinced all the same. Anyway, she found the money for his care (her father was in Belgium, and he died there) even though “I had little kids at the time”.

In Your Prime took about six months to research and eight months to write. Knight works at her kitchen table, where she generates all the ideas for her columns and books.

Column ideas are always coming, however: “I’ve a running list in my head all week.” Every Friday morning, the first thing she does is speak to her editor. Then she writes, finishing between lunchtime and 3pm. “I write quite fast.”

Her writing voice is distinct. She writes the way she does partly because she didn’t speak English until she was nine, she says.

“I came over from Brussels then, because my mother was marrying an English man. I think I had to look at sentences quite carefully, to learn how they were put together. I’m interested in tone, and I think that’s where tone comes from: sentence construction.”

Her boyfriend is the Scottish independent MP Eric Joyce. “He decked all those Tory MPs,” she says. That was in 2012, and Joyce was electronically tagged as a result. He resigned from the Labour Party. “He runs a little all- party committee on the Congo, and I’m very interested in the Congo because of the Belgian connection.”

Despite all her exhortations to middle-aged women to get online and get involved in internet dating, she and Eric met “in the flesh”, she says. “I know.”

In Your Prime: Older, Wiser, Happier is published by Fig Tree

Two classy French wines and change from a tenner
9