‘In Ireland, men treat women with such respect. I’ve never been objectified here’

New to the Parish: The lack of catcalls, heat and racism makes Dublin home 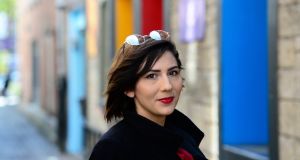 Emma Greenbury working in Dublin: ‘I miss the sunshine but I do not miss the heat.’ Photograph: Cyril Byrne

Emma Greenbury had spent less than a month in her new home when it occurred to her that she had never experienced harassment on the streets of Dublin. Accustomed to incessant catcalls when walking through Brisbane, Greenbury had learned to keep her eyes on the pavement and block out the crude, sexually charged remarks men of all ages would shout as she made her way to work.

“It’s just an attitude that men have in Australia – that they can say things to women and won’t get in trouble because it’s the girls’ fault for wearing certain clothing. But it doesn’t even matter what you wear, I could be wearing a jumper and tracksuit pants, men always objectify you. Even my 64-year-old mother gets harassed on the street daily.

“As a woman in Australia you just learn to live with it, you get on with things. But men in Ireland treat women with such respect. I’ve never been objectified by a man here and I feel a lot more empowered now when I go back to Australia to say something.”

People get defensive when you leave Australia. They wonder if you’re criticising Australia for not being good enough”

Greenbury spent the first two decades of her life in the residential suburb of Redcliffe on the outskirts of Brisbane. As a child she never thought about travelling abroad and only left the state of Queensland for the first time when she was 21.

“I hadn’t been on a plane until I was 21. My mum’s never left Australia so she didn’t put the travel bug in me. It was only when my boyfriend decided to move to Amsterdam that I began thinking about going overseas.”

Greenbury moved out of home when she was 17 but stayed in Brisbane where she studied a degree in creative industries. She went on to do a master’s degree in editing and publishing and then began work at an audiovisual company.

“I decided I didn’t want to live in Redcliffe anymore. The community aspect is good but it’s quite isolated and all the people know each other. The people who live there never leave and I wanted to go into the city.”

After a couple of trips to Bali in her early 20s, Greenbury began to consider travelling further away from Australia. “I love my friends and family but there was a part of me that didn’t like the idea of living in one place for my whole life.

“A lot of my friends in Brisbane haven’t travelled, we’re just so far from other countries. People also get defensive when you leave Australia. They wonder if you’re criticising Australia for not being good enough.”

When she was 22, Greenbury met her boyfriend Dan and the couple went backpacking around South America. After the trip she found a job in Brisbane as the editor of an online publication for over-60s. She loved her work but was itching to leave Australia again and jumped at the opportunity to spend a week in Ireland when approached by a travel agency looking for writers.

“I remember getting off the plane and thinking this is so weird, this feels like home. It was bizarre because I hadn’t even set foot off the plane but knew straight away.”

Greenbury returned home to her boyfriend with her mind made up. They were moving to Ireland. In September 2016 the couple arrived in Dublin and began the process of setting up a new life.

Irish people are your best friend for one night and then the next day it’s like, whatever”

“I knew there would be obstacles when we arrived but I didn’t think it would be so difficult and slow. In Australia they get stuff done quickly. I could not bear the glacial pace Irish people do everything at. It took me so long to get a job and a bank account. I just felt like I was waiting for life to start.”

Greenbury eventually found a job as an editor and writer for the online student website College Times. She enjoys working with Irish colleagues who she says are more relaxed and not as competitive as co-workers back home, but has struggled to make friends outside the office.

“One thing I’ve noticed about Irish people is they’re not easy to make friends with. Irish people in Australia are willing to integrate into your friendship group but here it’s more difficult to build friendships. I have Irish friends in work but when it’s over they’re gone. They have their own friends and people go home to their mammies on the weekend.

“I feel like there’s a bit of a boundary in making friends because family connections are so strong but also because they’ve established friendship groups from when they were younger. Irish people are your best friend for one night and then the next day it’s like, whatever.”

Despite her struggle to make friends, Greenbury says Irish people are very welcoming to outsiders. The culture of racism which she has witnessed in Australia is practically non-existent in Ireland, she adds.

I think Irish people need to learn to appreciate this country, it’s such a beautiful place.”

“People on the bus in Ireland don’t feel they’ll be yelled at for being another colour. That could happen so easily in Australia which is disappointing because we’re better than that. I’ve seen much more integration of communities here. The Australian government doesn’t want immigration, where here it feels they’re more welcome.”

She is also impressed by Irish people’s dedication to social issues and has begun following the campaign for the repeal of the 8th amendment.

“In Australia we have a much more conservative society when it comes to talking about things like abortion and gay rights. I find the abortion debate here so empowering. I saw so many men at the repeal the 8th rally and I thought wow, I wish Australian men could take more notice of issues that are affecting the women in their lives.”

With its free healthcare, job opportunities and sunny climate, Greenbury understands why so many Irish people have chosen to relocate to Australia. However, she gets frustrated when people question her decision to move in the other direction.

“When people ask me ‘Why would you leave that heat?’ I say ‘You try being in a sauna for three to five months of the year.’ I miss the sunshine but I do not miss the heat. I think Irish people need to learn to appreciate this country, it’s such a beautiful place.”