How same-sex sexual activity ceased to be a criminal act

In 1982 there were three high-profile murders of gay men 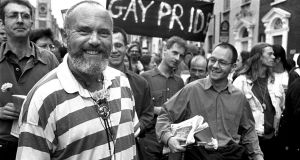 The following year a protest occurred in Dublin, where people marched from the Department of Justice to the British embassy. In 1975, the Campaign for Homosexual Law Reform began, with Mary McAleese and then Mary Robinson as legal advisers.

In 1981, the European Court of Human Rights ruled that there was no right to uphold a ban on homosexuality, leading Westminster to extend decriminalisation to Northern Ireland.

In 1982, there were three high-profile murders of gay men.

In January, the RTÉ set designer Charles Self was stabbed to death in a house in Monkstown in Dublin.

In September that year, John Roche was stabbed to death in a Cork hotel room by a hotel porter who told gardaí, “I had to kill him. He would have ruined my life. He wanted me to become a gay.” The killer, Michael O’Connor, was found not guilty of murder but guilty of manslaughter.

The day after that murder Declan Flynn was beaten to death in Fairview Park in Dublin, the violent and tragic culmination of numerous “gay bashings” and intimidations of men perceived to be gay in the park, which was a popular cruising area. When Flynn’s killers were given suspended sentences in 1983, the protest movement for gay rights grew, with members of the LGBT community marching on Fairview Park in a remarkable display of visibility.

Following a case in the High Court, in 1983 three out of five judges found against David Norris in the Supreme Court where he had taken a case to challenge what was essentially the criminalisation of gay men.

Norris went to Europe, where in 1988 the European Court of Human Rights ruled that Ireland’s law was incompatible with the European Convention on Human Rights. All of this was happening as the HIV/Aids crisis was escalating dramatically.

It took five years for the Oireachtas to decriminalise sexual acts between men, during which Norris personally lobbied members of the Oireachtas.

When Máire Geoghegan-Quinn became minister for justice, as Norris wrote in this newspaper this week, Phil Moore, who was the mother of a gay son, spoke to her personally. Geoghegan-Quinn included decriminalisation in a sexual offences Bill in 1993.

Meet Choupette, the cat with a bodyguard, a doctor and a chef
8