‘I had, like, €70 in my pocket to get everything I needed for the week. I literally felt like a homeless person’ 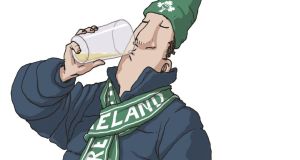 Amie with an ie is mid-story when I arrive. I’m standing at the bor, listening in. She’s talking about the time she went to Tesco to do the weekly grocery shop and discovered that she’d left her credit cord at home.

“That’s why,” she goes, “when people talk about the recession, I can actually, like, relate to it? I had, like, €70 in my pocket to get everything I needed for the week. I literally felt like a homeless person.”

It’s not right. The girl went to Alexandra College.

“For the first time in my life,” she goes, “I had to look at the actual prices of things? I could only afford the cheapest of everything. So instead of buying, like, the Marques de Riscal Rioja that I – oh my God – so love, I ended up having to buy this wine that came in a screw top bottle and smelled like my grandmother’s denture fixative.”

“I also bought this pâté that tasted like literally road kill and a moisturiser that made my famous T-zone even drier than usual. And at the same time, I was trying to, like, calculate in my head what I’d spent and what I had left to spend? I got to the checkout and my hands were, like, literally shaking.”

Chloe throws her orms around her and tells her not to upset herself. It’s over now. And, as it happens, that’s the general vibe of the evening. We’re in Kielys of Donnbybrook Town for a very special celebration – namely, my friend Oisinn’s ‘Dischorge from Bankruptcy’ porty.

I’ve never seen him look so happy, like a definite weight has been lifted? He’s knocking back the Veuve Clicquot like he thought he’d never taste the stuff again. And people are toasting him, including – I can’t help but notice – three or four of his biggest creditors, going, “New beginnings!” and I raise my glass along with everyone else.

There’s one or two dudes here from the banks that he owed millions to and they’re shouting, “We’ll see you on Monday morning, Oisinn – ten o’clock!” and everyone laughs, even though they’re probably only half joking?

One thing that Oisinn always knew how to do – aport from obviously scrummaging – was how to make money. He created Eau d’Affluence for Hugo Boss and a range of scented holy waters that helped make him a millionaire 60 times over by the time he was 26. Which is why he’s still everyone’s friend, even though he lost it all so spectacularly.

He did it once and he’s still young enough to do it again.

I watch him from a distance, sinking a knife into a cake in the shape of a euro sign – a gift from JP’s old man and all the staff at Hook, Lyon and Sinker. And I remember the day the two of us stood and watched through the railings as a crew of repo men stripped everything out of his gaff. His home sauna. His Honma golf clubs. His grid composition by John Kingerlee. It was all flogged off and the proceeds split among his creditors.

He’s suddenly standing in front of me. I’m like, “Nothing – fair focks on the whole having your name removed from the bankruptcy register thing.”

He’s there, “You seem, I don’t know, sad about something.”

I try to go, “Yeah, no, it’s 50 per cent the drink and 50 per cent Gordon D’Arcy playing his final game for Leinster last night. I’m a bit raw at the moment.”

He stares at me like he knows I’m lying. Two players who soldiered alongside each other like we did can have no secrets from each other. That’s rugby. Deal with it.

“Okay,” I go, “I was remembering the day we stood outside your gaff and watched them take away all your stuff.”

He shrugs his shoulders. He goes, “Hey, it was only stuff.”

He goes, “And they still didn’t make me a better golfer.”

That’s actually true. The joke in Elm Pork was that Nasa should have hired Oisinn to find water on Mars.

I’m there, “They took everything you had in the world, Dude.”

“No, they didn’t,” he goes. “They didn’t take anything from me – not one single thing – that actually mattered. You’re still here. Christian, Fionn, JP. You all stood by me.”

“Rugby,” I go. “I just want that one word on my gravestone.”

“And now,” he goes, just shaking his head, “I’ve got this second chance. And I can’t sleep at night because my mind is just buzzing with ideas, plans, schemes.”

I’m like, “But what if the same thing happens again?”

“Maybe it will,” he goes. “And so what if it does? Can I tell you something I learned in the last few years, Ross? I used to think that life was about accumulating things. It’s actually the exact opposite. It’s about losing things. And the longer we live, the more we lose. Our hair, our hearing, the people we love.”

“I can’t believe it’s not Buddha.”

“It’s just a bit of wisdom that usually comes to us in middle age. I just happened to discover it in my 20s.”

I’m there, “I’d like to think that life is still about accumulating things, though. I suppose I’ve always been an idealist.”

He grabs me by the shoulder. “Come on,” he goes. “This is the fun part of the evening. I’m going to burn my Order of Adjudication and Warrant of Seizure in a bucket on the bor.”

And what else can I say except fair focks. ILLUSTRATION: ALAN CLARKE