First Encounters: ‘I felt really at ease around him’

In conversation with Frances O’Rourke 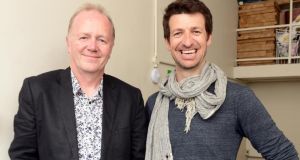 Eugene Langan is a photographer who specialises in portraits and food photography. He will have an exhibition with Johan van der Merwe, the ‘Bite Project’, at the Taste of Dublin festival in June. A Dubliner, he lives in Phibsborough with his wife Barbara Ebert, and children Emmet and Phoebe

Johan had just arrived back from Canada two years ago and contacted me to meet up and present his food styling portfolio. We decided we’d work together. For me what was striking about him was his enthusiasm, his positivity and his energy.

After the first test shoot we worked on, it was very evident it was just great to have him in the room. Other people were charmed by him too: when you’re working on food projects, on packaging, for example, or something for a brochure, you’ll have the client and other people in; his enthusiasm is contagious, it’s brilliant.

He’s very interested in photography. The latest series we’re working on is a series of portraits of people connected to food culture . . . it could be an urban gardener in a community garden, or a chef, or a girl who gives out food to charity organisations. That mixes portraiture with food photography, which will be on show in the “Bite Project”.

Now I’m trying to get him involved in another project which would involve a passion of mine, sailing, maybe to get a series of recipes together for sailors. But I’ve got to get him out on a boat first.

Johan advises restaurants setting up on their menu, he teaches in Cook’s Academy, and he comes into my studio to do food styling – it could be haute cuisine or a fish finger. Johan produces food for the camera as opposed to for eating . . . food stylists have a bevy of tricks, their own particular secrets.

I’ve been working in photography since I left school, set up my own business in the early 1980s and have a studio on the north side of Smithfield. Food and people are two of my favourite subjects. I’ve had a number of exhibitions – a series of portraits of people in Phibsborough; another project on the Bull Wall that showed in Darc Space gallery and last year, a series of images of the war memorial park in Islandbridge at night time. I’m also working on portraits of Irish painters.

My main clients for food photography are graphic design companies and a few ad agencies, looking for brochures, annual reports, packaging. You learn a lot from food stylists, but I’m not a great chef by a long shot. My wife Barbara’s such a great cook, she tends to do it – she loves it. She’s a community gardener, she’s one of our subjects. She’s given Johan some wild garlic to bring down to Kerry, to try and grow it there.

Eugene Langan and Johan van der Merwe’s the Bite Project – a portrait and food photography exhibition – will be on view during this year’s Taste of Dublin Festival. Van der Merwe will also run the Salt of the Earth Test Kitchen, showing how to cook fish and vegetables. Taste of Dublin 2014 will take place in the Iveagh Gardens, Dublin, from June 12th-15th

Johan Van Der Merwe is a chef and food stylist who teaches cooking and runs the summer restaurant in Cill Rialaig Arts Centre in Ballinskelligs, Co Kerry. He is also running the Salt of the Earth test kitchen at the 2014 Taste of Dublin festival. Originally from South Africa, he lives in Ringsend, Dublin

I met Eugene through food styling. A lot of people say “What?” when you tell them you’re a food stylist. We had a shoot the other day and had just three items – a roast chicken, a barbecue skewer and a tortilla wrap – to prepare and photograph. People were shocked when we said we were here from 9am to 7pm. The camera looks at food differently. The most unusual food I’ve had to prepare was a drumstick shaped like the World Cup, for Moy Park.

I’m a chef, but food styling is my bread and butter. I have an interest in photography too and Eugene’s been brilliant at teaching me. When I met him about two years ago, I just really liked him, no other way to describe it, I felt really at ease around him. We do occasionally go to the pub, to our detriment.

I’m from Franschoek in South Africa. A friend of mine runs a gallery there, and sells artwork to Michel Roux Jnr; he faxed her the night before I left South Africa, and said I could do a stage in The Waterside Inn [the Roux’s three-Michelin starred restaurant on the river Thames]. But before I left South Africa, I’d read the Cafe Paradiso cookbook by Denis Cotter and wanted to do vegetarian cooking. So after my visa ran out for London, I phoned Denis and said, any jobs?

I ended up becoming head chef in his restaurant in Cork. I got my Irish citizenship, then went to Vancouver to explore my cooking – but I got homesick for Ireland. My friend Sandy, who owns Forest Avenue restaurant in Dublin with her husband, John, said, come and live with us.

That’s when I got into food styling and met Eugene; I also teach at Cook’s Academy [Dublin cookery school] and run a cafe in the summer in Cill Rialaig [the Co Kerry arts centre]: I’ve set it up in such a way that I have suppliers growing things for me now – it’s a chef’s dream.

What I love about Ireland is the food: the produce we have here is so fresh. Last night I was doing recipes for the Taste kitchen, Salt of the Earth, was on the phone to Kerry to the person who’ll harvest my seaweed, to the people who’ll send me the cheese. The menu will include scallop hot dogs, beetroot fries, ceviche – a different dish every day.

Eugene and I have done some big projects together; there are busy and slow periods, and when it’s slow we do tests together, exercises. That’s how the “Bite Project” came about: Eugene wanted to do portraits of people eating, so we said let’s do it together. We did the first shoot with Phoebe, Eugene’s daughter; she’s stunning. I’ve gone to Eugene and Barbara’s house to do shoots, feel so at home there with them and their children Emmet and Phoebe – and they have the cutest puppy, Luigi.

Buy yourself a dream. . . with the planning headaches sorted
8