First encounters: ‘I do get some reflected glory’ 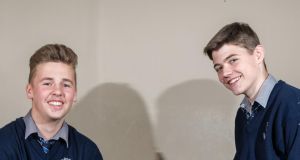 Aron Kehoe, 16, has just finished transition year in Dunshaughlin Community College. He plays football, golf and Airsoft, and plans to do computer studies in college. He lives in Dunshaughlin, Co Meath with his family
I didn’t know about Nathan acting in primary school, but I did by second year. I was dying to see Vikings. I remember the first time I saw Nathan’s “Bjorn” hair. I came back from holidays; he was downstairs and I asked him to come out. He had this bleached blond hair: I didn’t notice the back of his head was shaved until he turned around, I started laughing again. It was like a half-moon.

Only two or three people in school knew about Vikings at first. Before it started to show in Ireland [in January this year], we got our English teacher to play the trailer for it in class – and then the whole school started to know about it.

I do get some reflected glory just because I’m Nathan’s friend. I was on holidays in Orlando, in Florida, and Vikings is huge in America. There everyone knew who he was, and they got really excited after I told them I was Nathan’s friend. They didn’t believe me at first, so I had to show them pictures of me and Nathan together. They just gasped.

I was a bit jealous of the time he got off school – he came back in mid-November the first year he filmed Vikings.

Nathan’s on my football team. Am I a better footballer? Yes, no question. I play golf and Airsoft as well. And, like Nathan, I got eight honours in the Junior Cert. I want to do computer studies in college; that’s the way I’m heading right now.

Nathan’s really good at art – yeah, he’s so perfect in every way! And with a little help from me, he gets the girls. Nathan has three ‘followers’ in the school, three girls who follow him everywhere – and I do mean everywhere – since Vikings.

I didn’t get to meet any of Nathan’s costars. There’s a couple I’d like to have met, like Gustaf Skarsgard. He’s Floki, the guy who builds the boats. I love his character – he’s a bit mad. And Travis Fimmel, who plays Nathan’s dad in the show – the TV dad is really cool.

If people come up to Nathan, his other friends and I just stand back, let him be – let him have his moment. In the airport in Italy, me and Joseph and other friends were going through the terminal and started screaming at the top of our lungs, “Oh my God, it’s Nathan O’Toole”. The entire airport was looking at us.


Nathan O’Toole, 16, plays Bjorn Lothbrok in ‘Vikings’, the hit international TV drama series filmed in Ireland. He started drama classes in Ann Kavanagh’s Young People’s Theatre when he was 11 and previously had a part in ‘The Borgias’. He has just finished transition year and lives in Dunshaughlin, Co Meath
I met Aron in St Seachnall’s National School when I was four. I can’t really remember why we became friends: there were four of us : Joseph, Alex and Aron and me. Joseph and Alex were friends with Aron. Then I came in and I stuck with them. He was really nice, and we just stayed friends. Our mothers became friends too, and we used to go to each other’s houses.

We’re now in Dunshaughlin Community College. Aron and I were in the same class in secondary school for the first three years. And we’re on a football team together: Dunshaughlin Youths FC. Aron is the exact same in school as outside. He’s just nice, wouldn’t be a messer. We have the craic but don’t take it too far.

I started drama school when I was 11. First I got the part of Vincenzo in The Borgias. Then, when I was in second and third year in secondary school, I got the part of Bjorn in Vikings. I couldn’t tell Aron what Vikings was about. You can’t give anything away. It was shot in the summer, but I had to take time out of school. I had a really good tutor on set to teach me the subjects I needed for the Junior Cert, and I got eight honours. Mostly, people don’t recognise me as Bjorn because my appearance is completely different . They dyed my hair blond, and gave me contacts to change my eye colour. Then they dyed my hair back to my own colour, which is brown. It started fading and turned really ginger – it took eight months to get back to the way it is now. And then, I had to get it bleached all over again for the second year of filming.

Girls don’t really notice me because of the show. I don’t need my character to get girls. Okay, I’m joking.

I want to make a career out of acting. I’ve finished filming with Vikings. I got a small role in Penny Dreadful [Sky Atlantic’s new Victorian Gothic horror series], playing a character called Ernest. I have a manager in America and an agent here who sends me to audition for stuff.

What do I do when I’m not in school or filming? I just go out with my friends, to shops, to play football, go to the gym, no hassle. One day I said online something about going to school and someone tweeted back: “Do you not get home-schooled?” They probably think there’s paparazzi at the door or something.