‘My job is to make her laugh’ 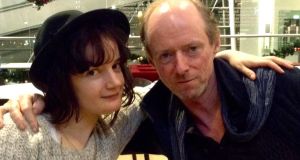 Aoife Duffin is an actress whose performance in ‘A Girl is a Half-Formed Thing’ won her a best actress nomination in this year’s ‘Irish Times’ theatre awards. She has worked mainly in theatre but also played Trisha in the sit-com ‘Moone Boy’ and has appeared in films, including ‘What Richard Did’. Originally from Castlegregory, Co Kerry, she now lives in London

I met Ned, he reminds me, in a rehearsal space near the Abbey about 10 years ago, when I was shortly out of college. He was rehearsing an Abbey show, I was working with TEAM educational theatre. I don’t properly remember that time but I do remember meeting him another time in the smoking area of the pub across from the Abbey and thinking he was kind of unusual and intimidating.

Then later, we met in a bar with the Pan Pan theatre gang. He suggested that I take over from Ruth Negga in Pan Pan’s Oedipus Loves You. I knew Gavin Quinn, the director, too, got the part and travelled the world with the show. It was through working with Pan Pan that we became friends.

He’s not at all, obviously: he’s kind, warm, and one of the funniest people I know. He’s not intimidating, he’s the opposite. And he’s very smart.

Apart from acting, we have music in common. We also go swimming a lot out in Seapoint, went every day last summer. And we both like red wine. I moved to London last year, but I stayed in his house in Dublin recently while rehearsing for A Girl. Neither of us has a partner at the moment, but it’s a completely platonic friendship.

It’s good to have good friends like Ned to support you. When I was rehearsing for A Girl, I was trying to find the balance of working and taking a break. I was stressing and said to Ned one day “If I keep working on this constantly, will that mean it will be better? And he went: “Obviously”. That was a bit of a lightbulb moment.

We talk about things like happiness a lot, what are the things to pursue in life to make you happy. His way of looking at things would also be, if it doesn’t all work out, who cares? Go for a walk on the beach, it doesn’t matter. It’s a good way to look at it.

Ned’s got a really big heart, but his best point is that he’s hilarious. He’s very curious about other people, a good quality especially in an actor. And he’d do anything for you. He’s got a lightness to him that’s a joy to be around.

A Girl Is a Half-Formed Thing finishes its run at the Project Theatre, Dublin, tonight, and moves to The Mac, Belfast from February 17th-21st and to the Mermaid Arts Centre, Bray, Co Wicklow, February 27th-28th

Ned Dennehy is an actor who now works mainly in films and TV. His film roles include ‘Tyrannosaur’ and on TV he was in RTÉ’s ‘Damo & Ivor’ and BBC’s ‘Peaky Blinders’ and ‘Parade’s End’. He plays Letters Molloy in Jimmy McGovern’s BBC TV series ‘Banished’, to be screened shortly, and has just finished filming in the Australian TV series ‘Glitch’. From Dublin, he lives in Sandymount

I met Aoife for the very first time when I was rehearsing at the Abbey and she was working with TEAM. Then we did a couple of shows with Pan Pan, a theatre company that’s out there, edgy. They involved music, bands, touring; it was a lot of fun. We spent some time together then and that’s where the friendship started. She was young, chirpy and hopeful then – it wasn’t until later that she became involved in darker, edgier roles. Now she’s in the thick of that. I am 20 years older than her but in the theatre world, acting world, you can be friends with anybody you like of any age.

I used to be an architect and was also a graphic artist. There were some theatre workshops that friends were doing and I did some, then there was a play, then somebody told me I was good, then there was a tour – one thing led to another.

Aoife and I don’t see much of each other, but we keep in touch by all the modern devices, What’s App, Skype – we’re all over it. When I get back from Australia [where Dennehy is currently working], she’ll still be staying in my house: then it’s everyday living, listening to music, trying to stay fit, running, swimming, drinking red wine and eating Lindt dark chocolate, the formula for happiness.

In acting, before you get a job there’s a lot of work – tapes, auditions, meetings, rejections, preparation. Making tapes is quite a recent development that makes the whole thing more internationally easy. Aoife and I and others share that work.

She plays a lot of edgy, dark stuff and I do as well. Here’s an example of a text I got from Aoife – we spend a lot of time texting: “I’m exhausted trying to be a decent actress and be everybody’s friend and watch what I eat, not drink too much, stay sane, sleep well at night, and exercise, and stay in touch with my family and stay sane, and stay sane.” And that wasn’t even when she was doing her one-person show. That’s Aoife. She’s driven.

It’s very hard to stay relaxed within acting, on some level. So chirpy, happy-go-lucky doesn’t come easy to Aoife and possibly not to me either. I do get creepy roles but in some of my up and coming stuff, like Banished, I play a terribly nice man, Letters Molloy, nothing creepy about him.

I refer to Aoife as my “feeawncee”, and she says, you wish. It is a platonic relationship, absolutely – it means you can discuss the other person’s love life. It’s a friendship and of course acting’s a big part of it. And I guess it’s therapy, in terms of – for both of us – keeping up the war against depression, keeping the dark at bay.

Aoife’s driven, dark, brave, fearless, truthful on stage. That’s why I have to try and lighten her up a bit, that’s my job, to make her laugh.