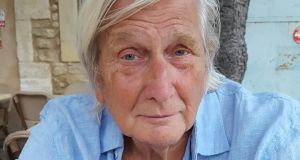 Walter Pfeiffer, who was born and grew up in Gerolstein, Germany, had a deep and almost life-long love affair with Ireland

Walter Pfeiffer, who has died aged 73, was a photographer whose standards of excellence and attention to detail was applied with equal diligence to a single clove of garlic resting on a plate as to the epic landscapes of Connemara and Wicklow.

He had a deep and almost life-long love affair with Ireland that was fuelled by a passion for light, colour, landscape and people, and which resulted in a body of work constituting a legacy that will enrich for years to come.

Pfeiffer’s passions extended beyond photography. He also had a deep love of food and cooking; he adored his garden, both for its flowers and for the food it produced; and he was devoted to his family, his children and their achievements, and to his dogs.

Remembering him in the days following his unexpected death, his wife recalled a private and self-contained man, who nonetheless was outgoing, whose professional skills were admired by colleagues but whose praise he wore lightly.

Walter Pfeiffer was born in 1943 and grew up in Gerolstein, a small rural town in the Eifel region, a part of western Germany that also straddles Luxembourg and Belgium. His father, Nicholas, who survived two world wars, worked for German railways; his mother, Marguerite, was a homemaker.

Love of the countrywide

Pfeiffer junior lived with his siblings, brothers Harald and Jurgen (who predeceased him) and sisters Hiltrud and Hermine. His grandparents had a small farm and Pfeiffer’s family grew most of their own vegetables, both aspects of his early life that helped nurture a love of the countryside and its produce.

An eye for image must have been apparent early because, aged 11, his mother gave him a camera. An adventurous streak manifested itself shortly after when, aged just 14, he took himself off to see Istanbul.

After schooling, he trained as a photographer in Cologne. The momentous turn in his life came in 1964 when, aged 20, he travelled to Ireland with Hiltrud, and Heinz Papst, a friend from photography school.

They visited the Aran Islands and the light there, together with the landscape, history and people captivated Pfeiffer such that he returned the following year to make Ireland his home. “The Aran Islands brought him to Ireland but it was Luggala and Wicklow that captured him,” according to his wife, Valerie Pfeiffer (nee Swift).

They met in 1977 at an advertising agency party in Dublin. At a time, she worked for GPA Films and Pfeiffer, a tall and good-looking man in his prime and already a successful commercial photographer, was wearing an Aran sweater and stood out from the crowd. They later married in the United States.

Pfeiffer established himself in Dublin as a leading fashion and food photographer, working for major designers and food producers and marketers, including Bord Bia. His most recent work was to create the imaging behind the Dunne Stores Simply Better brand range.

Food photography (“he could spend four hours photographing peas on a plate,” according to Valerie) brought him into contact with leading chefs, often resulting in books. They included New Irish Cooking (with Conrad Gallagher), Irish Oyster Cuisine (with Máirín Uí Chomáin), and he provided the illustrations for Sybil Connolly and Helen Dillon’s In an Irish Garden.

As photographic subject matter, Pfeiffer did not specialise in people (“He didn’t like photographing people because he believed people had a vision of themselves already,” said Valerie) but nonetheless he did photograph Katharine Hepburn, Maureen O’Hara and Molly Keane among others.

He was a pioneering poster photographer, spawning imitators but no equal. His was the lens behind the Irish doorways series, and many other popular posters, including An Irish Dresser, Ireland’s Writers, Castles of Ireland, Windows of Ireland, RMS Titanic, Best Loved Irish Fishing Flies and a variety of others celebrating place, including Killarney, west Cork, the Aran Islands and the west of Ireland generally.

More than any other subject matter, however, Pfeiffer was inspired by Ireland’s untamed landscape, and by Connemara and Wicklow in particular. He spent five years capturing the grandeur and magic of Luggala and, in the process, became good friends with owner Garech de Brún and of fellow Wicklow-resident, film-maker John Boorman.

An enormous archive of images of Luggala and its surrounding landscape awaits attention and, surely, wider appreciation.

Pfeiffer spent most of his life living in Delgany, Co Wicklow, and later a substantial amount of time in Ménerbes in the Luberon mountains in Provence, unable to quench his love of travel and exploring beautiful landscapes. But despite the renowned beauty of the south of France, he yearned for Ireland.

“Provence is too beautiful,” he said once to Valerie. “It was too perfect. He said he couldn’t photograph it.”

Pfeiffer would say to her often, I’m taking my camera for a drive, only to disappear into the countryside to capture images of things great and small.

He produced two particularly stunning volumes, Wicklow – A Personal View and Connemara and Beyond. A sequel to the latter, Connemara and Aran, was to have been published this month by Artisan House of Letterfrack but will not now be available until July with a formal launch planned for September. In an introduction, he quotes approvingly from Andrew McNeillie’s An Aran Keening – “the heart’s catchment” – to describe his own love of the area, a place he writes that is “supremely light-filled, recklessly hued and splendidly untamed”.

Pfeiffer’s personality was not obviously effervescent but he had an abundance of charm, gentleness and warmth. He enjoyed the company of people connected to places that interested him and of his family, whose members he liked to alarm gently with outrageous suggestions.

He is survived by Valerie and by his children, son Nicholas, daughters Nadia, Shona, Keeva and Zianna, and by his brother and sisters.