Editor of 18th-century texts and historian of the provincial press 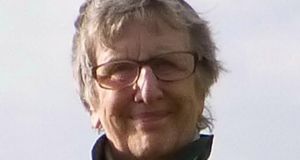 Marie-Louise Jennings, who has died aged 81, was best known to readers of Irish history as Marie-Louise Legg, the name under which she published most of her work: notably her pioneering study Newspapers and Nationalism: the Irish Provincial Press 1850-1892 and her exacting editions of a number of key eighteenth-century texts.

But to an extraordinarily wide and affectionate circle of friends in Britain and Ireland she was simply Mary-Lou. Her life reflected a number of different worlds. Through her mother, a Cooper of Markree Castle, she was related to Irish clans such as the Burkes , Guinnesses and Synges; her father, the film director and surrealist artist Humphrey Jennings, came from a family of Bohemian aesthetes.

Both cultures, their traditions and eccentricities, were memorably evoked in her absorbing memoir Escaping the Black Ox. Through her parents’ friends and her own predilections she gravitated to left-wing politics in London, where she worked for Tony Benn and Neil Kinnock and served as a councillor on the Inner London Education Authority and other bodies.

Through her research she reconnected with the Irish side of her inheritance, notably in her 1992 edition of the letters written by her ancestor Bishop Edward Synge to his beloved daughter Alicia (“Dear Giddy Brat”) between 1746 and 1752.

Consummately edited, with a sharp eye for telling social detail and incisive characterisation, The Synge Letters opened an extraordinarily intimate window into everyday life in Georgian Ireland, and were hailed as a classic.

Newspapers and Nationalism followed, along with illuminating scholarly editions of the diary of Nicholas Peacock, an eighteenth-century Limerick farmer, and the Quaker nationalist Alfred Webb, as well as a massive edition of Bishop Synge’s 1749 Census of Elphin, for the Irish Manuscripts Commission, and the co-authored Sligo volume in the Irish Historic Towns Atlas series. Her edition of Katherine Conolly’s letters was all but completed when she died.

But his romantic marriage to Cecily Cooper, much disapproved of by her parents, was tense, and there was very little money: at one point a dentistry bill for Mary-Lou was met by selling a René Magritte painting (now a treasured possession of the Museum Boijmans Van Beuningen in Rotterdam).

After her father’s sudden death in 1950 the teenage Mary-Lou (who had been working at the Old Vic) unwillingly did a secretarial course and became the only breadwinner of the family. Eventually, strained relations with her mother encouraged her to leave home (for some time she was the tenant of the poet Kathleen Raine, a family friend).

When she came to Birkbeck she was already a veteran of political activities in Hammersmith and an omnivorous reader; academic success was followed by a second marriage, to a childhood friend, the distinguished civil servant Sir Thomas Legg, permanent secretary of the lord chancellor’s department.

Her circle of acquaintance, already formidably wide, now included the great and good of the legal and political establishment. But what meant most to her was the Irish historical world. She spent much time based at the Kildare Street and University Club, pursuing material in the National Library, Trinity and Marsh’s Library, speaking at conferences, and tracing Synge or Peacock connections on field-work jaunts with historian friends.

When her second marriage ended in 2008 she reverted to her own name and reconstructed her life yet again, with the resilience, charm and sharp good humour which had always characterised her; here once more the affection she inspired in others stood her in good stead.

They will not forget her, and her work will last. She is survived by her children Anna, Lucy and Simon and by a sister, Charlotte.