The unconventional writer and sailor, who died last weekend, was the teenage witness in the White Mischief murder case 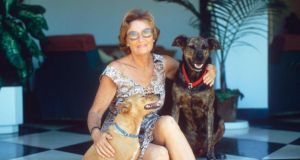 In old age Carberry was a handsome woman, with what friends described as “a filthy vocabulary” from her years at sea. She was unconventional, and it is thought that she has left her body, with its several tatoos, for exhibition by the controversial anatomist and showman Gunther von Hagens. A 2002 photograph of her shows a good-looking woman, without make up, wearing a summer dress made of African fabric. She spent her later years in a flat in London. Let us hope it was a happy ending.

“My father, John Carberry, was a renegade Irish peer who admired Hitler and had sadistic tastes,” she wrote in her memoir of her early years, Child of Happy Valley. “My stepmother June, famous in the colony for her cheerful promiscuity and prodigious drinking, was an enthusiastic member of the Happy Valley set.”

Her father was Lord Carbery, the 10th baron and sixth baronet. (There is one R in the title and two in the family name.) He came of age in 1913 and, to the fury of his formidable mother, Mary, with whom he was feuding, announced that he would be selling Castle Freke, in west Cork. He later renounced his title, and was a Nazi sympathiser. He seems to have been a psychopath, being extraordinarily cruel not just to his only daughter but also to any vulnerable human and, perhaps most tellingly, to animals.

In Kenya he had Juanita beaten until she bled. He entered her for terrifying swimming races and diving competitions, and wagered on them. He built what he called the “children’s wing”, where she slept alone. Her natural mother, Maïa Anderson, had died in her own plane when Juanita was three. (John Carberry was a flying enthusiast and in July 1914 had landed his plane in Clonakilty.) When his wife had her fatal crash in Kenya, and died aged just 24, the Anderson family held her husband responsible, as he had bullied her into performing a flying display at an air show.

In 1941 Juanita was the teenage witness in the scandal around the murder of Josslyn Hay, 22nd earl of Erroll. This was the murder that was later explored in the book White Mischief. A film of the same name starred Charles Dance as the serial adulterer Hay and Greta Scacchi as his young lover, Diana Delves Broughton.

The murder trial gave Juanita a new standing. “The realisation that her testimony risked sending the man accused of murdering [Hay] to the gallows gave ‘the brat’ a new status,” she wrote.

According to statements she made almost 50 years later, the murderer, Sir John Henry Delves Broughton, 30 years older than Diana, confessed his crime to Juanita the day after the killing. She had noticed that he was burning some gym shoes on a bonfire; this drew her attention because it was routine to give old shoes to the African servants. A mark from similar shoes had been found in the car in which Hay’s corpse had been discovered.

Delves Broughton, who was known as Jock, had been kind to the friendless Juanita – he told her now “not to be frightened when the police came” – and this kindness guaranteed the girl’s loyalty to him, and her silence.

“The key to it was loneliness,” Juanita eventually told the author of White Mischief, James Fox. “ He had been provoked to do it. There was nothing premeditated about it. They had gone too far . . . And the fact is that he was in love with Diana.”

Delves Boughton was acquitted after a sensational trial that turned the spotlight on the decadent goings-on in what was known as Happy Valley. In the middle of the second World War, with death and deprivation in Europe, the behaviour of a drink-ridden, drug-addled orgiastic group of aristocrats was not received kindly.

Hay, the victim, was a careless man who liked rich, married mistresses, and was not above publicly humiliating their husbands. He was noble – he was lord high constable of Scotland by birth – but he was bright, and at the time of his death was working hard as the colony’s military secretary. He was also bully to his African servants, and had toyed, briefly, with fascism.

He lost interest in his second wife, although not in her money. Countess Molly subsequently died at the lovely house they shared, which was called the Djinn Palace, and which the visiting GP, an Irishman called Joseph Gregory, remembered during her decline as smelling of “champagne and vomit.” Her body was covered with heroin abscesses.

The accused, Delves Broughton, was later described by fellow members at his club in London as “dishonest, charmless, morose”. He was widely believed to have faked sunstroke in order to avoid going to the front with the Irish Guards in 1914. He swindled insurance companies and his family to pay gambling debts – he was a racing man. His friend Lord (Paddy) Carnarvon, also a racing man, later said of him: “Jock was perhaps a little vain and I think damn stupid, if you ask me.”

After the trial Delves Broughton, who had been widely ostracised because of it and who dreaded loneliness, killed himself in an English hotel. His lovely widow married twice more, eventually becoming Lady Delamere and, in her turn, an enthusiastic racehorse owner.

That serves as a good obituary for her now. She was the perfect witness to the end.

London Fashion Week: Paul Costelloe back in form with a little help from his son
5

Drivers, slow down for the good of the planet (and your wallet)
6

What sold for about €500k in Ballsbridge, Dalkey, Sallynoggin and Lismore
8