Doctor who worked for the abolition of corporal punishment 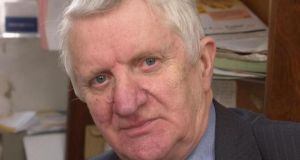 It may be surprising to many under the age of 40, but when Dr Cyril Daly, who has died aged 82, first began in 1967 to campaign for the abolition of corporal punishment in Irish schools, he was widely criticised.

The critics included the then general secretary of the Irish National Teachers Organisation, the then hugely popular humorous writer (and teacher) John D Sheridan, and the Catholic bishop of Galway. A delegation from the INTO’s Clontarf branch picketed a symposium on the subject in December 1969, carrying placards alleging that Daly was “smearing” teachers.

Daly began his campaign when one of his sons returned from school to tell him he had witnessed another boy being beaten by a teacher at his primary school. When Dr Daly told the principal that he didn’t want his children attending a school where such punishments were policy, he was abruptly told to take them out.

After home-schooling his three sons for some months he enrolled them in the non-denominational Sandford Park school, a remarkable thing to do at that time for a man who was, and remained all his life, a committed and devout Catholic.

In 1968 Daly made a strikingly public and, for the period, daring move when he had published in the Sunday Press an open letter to the Catholic archbishop of Dublin, John Charles McQuaid, in which he stated that Irish Catholic education was “offensive to His (Christ’s) teaching” and “corrupt ... in its infliction of violence”. There followed a letter to the minister for education, Brian Lenihan, signed also by three other doctors, two of them psychiatrists, calling for a ban on corporal punishment.

In June 1969, he wrote to the then newly appointed papal nuncio, Gaetano Alibrandi, harshly criticising the regime of physical punishment in Catholic schools in “its propensity to induce psycho-sexual deviation from the norm”, a point he emphasised again in articles for a women’s magazine and for the Sunday World in the early 1970s. Physical abuse, he wrote, was then standard in only two callings, prostitution and teaching.

Later the same year, rebutting criticism from Dr Michael Browne, bishop of Galway, Daly wrote in a letter to The Irish Times that “in any class of 40 children, seven or eight would be in need of remedial education” and these were the ones most likely to be physicall punished. The result, he wrote, was an emotionally retarded child “quite unfit to meet the exigencies of life”.

Corporal punishment was eventually outlawed in Irish schools in 1982.

Daly also had a strong talent as writer: a play of his, A Matter of Practice, was produced by the Abbey Theatre in 1964, and for over 40 years he wrote a witty weekly column, on a huge variety of subjects, for the Irish Medical Times.

In later life, he robustly defended orthodox Catholicism, voting against a motion at the Irish Medical Organisation conference in Killarney calling for a liberalisation of the abortion laws, condemning a rowdy demonstration in Dublin’s St Andrew’s Church by old-age pensioners protesting at cuts made in the 2009 budget, suggesting in a letter to The Irish Times that there should be “a public act of reparation to the Divine Presence”.

A GP with a strong social conscience, he also sternly condemned the then minister for health Mary Harney for her plans in 2007 to co-locate private and public hospitals, remarking in another Irish Times letter that the social dynamic of the policy was “that the poor are to be corralled away from the wealthy” while “the rich are to be insulated from the arm-pits of the poor by lush green lawns”.

John Patrick Cyril Daly was born into a Cork business family, the son of Cornelius and Emily Daly of Drimoleague. Shortly afterwards the family relocated to Dublin, where he was educated at Colaiste Mhuire and UCD.

Qualifying in medicine in 1957, he worked at the Richmond and St. John of God hospitals before setting up his own practice in the early 1960s, near where he had grown up in the Marino and Clontarf districts of the capital.

He is survived by his widow, Aileen, their six children, Niall, Rory, Toddy, Conal, Helen and Sally, his sisters Collette and Frances, and by grandchildren.