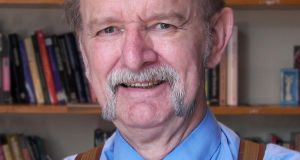 David W Miller belonged to a coterie of American scholars who, from the early 1970s, helped to bring new sophistication to the study of Ireland’s past. Much of his research concerned the relationship of politics and religion from the early modern period to the late 20th century. He distinguished himself from many of his fellow historians by taking a keen interest in developments in the harder social sciences, reading widely in geography, demography, political science and sociology, and importing methods from those disciplines into his work.

He was born on July 9th, 1940, in Pennsylvania, to Arthur C Miller, a civil engineer, and Kathryn Long Miller. David was reared in Mississippi, in the segregated South, an experience that imbued him with a deep social concern. Studies in literature introduced him to the “Celtic Revival” which, in turn, led him to Irish history. He did his doctoral work at the University of Chicago, under Emmet Larkin, an authority on the Catholic Church in Ireland. Larkin was difficult, as too were his books, which reproduced chunks of material from Vatican archives. Miller acknowledged as much in a Festschrift: “The name Emmet Larkin seldom evokes an indifferent response … ” Always fair-minded and forgiving, he found value in Larkin’s work and never let his mentor’s pomposity rupture their friendship.

In 1967 Miller joined the faculty of Carnegie Mellon, one of the world’s great technological universities but home too to prestigious programmes in fine arts, humanities and the social sciences. His first book was Church, State and Nation in Ireland, 1898-1921 (1973), a magisterial political history. “Miller touches nothing that he does not illuminate,” Joe Lee wrote in the American Historical Review. “His control of his voluminous material, his clarity of style, acuity of perception, and maturity of judgment make this a work of rare distinction.”

Queen’s Rebels (1978) consolidated his reputation. It argued that unionists were neither Irish fish nor British fowl, but rather a people without a nation, defined by a contractarian relationship with the crown. Ten years after its publication, Charles Townshend described it as having “a good claim to be the most important single contribution to any understanding of the Ulster problem”, and in 2007 UCD Press reissued it in its Classics of Irish History series. Still, it continues to draw trenchant criticism, most recently in Brendan O’Leary’s acclaimed A Treatise on Northern Ireland (2019).

Although never boastful, Miller was proud of Queen’s Rebels and enjoyed telling how he had heard that a UDA man, struggling to explain his politics, had declared, “I am a Queen’s Rebel; I have read a book about it.”

The “devotional revolution”, Larkin’s term for the process by which Irish Catholics became a chapel-oriented people, was an abiding concern. From data collected in 1834, Miller calculated that only 43 percent of Catholics attended weekly Mass before the Famine, with the lowest attendance rates (20-30 percent) in the West. In contrast to Larkin, who attributed the emergence of near-universal attendance to reforming bishops, he emphasised the structural impact of the Famine – those least likely to attend Mass belonged to classes decimated by hunger, disease and emigration. In the 1990s he learned Irish, the better to understand popular Catholic belief and practice.

Miller also wrote many landmark essays on Irish Presbyterianism, notably on its prophetic and conversionist evangelical traditions. Among historians of Ireland, a flock not noted for advanced numeracy, he was that rare bird: an accomplished cliometrician, who deployed multivariate regression analysis in his work on religion and regional systems. Colleagues will long remember his erudition and generosity, including a cheerful readiness to assist in the manipulation and mapping of data.

Miller was always dapper, favouring braces before the hipsters. He was an elder of Pittsburgh’s Sixth Presbyterian Church, wrote its history, sang in its choir and cooked and served meals for an associated men’s shelter.

David W Miller died on October 20th after a struggle with Alzheimer’s. He is survived by his wife Margaret, daughter Roberta, and granddaughter Abigail.