Dating dangers: control and coercion in the online age 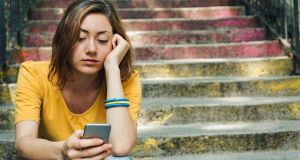 “She is on Facebook, and her partner constantly watches her posts and messages she gets from other people.” Photograph: Mixmike/Getty Images

Are you ever too young to be abused by an intimate partner? Sadly the answer appears to be no. In Ireland 60 per cent of domestic abuse starts before a woman is 25.

One in five women over the age of 18 experience abuse from an intimate partner, according to Women’s Aid. Shockingly, since 1996 roughly half of female homicide victims aged 18-25 in Ireland have been killed by their boyfriend or ex.

A national public-awareness campaign, 2in2u, will be launched by Women’s Aid next week, just before Valentine’s Day. This initiative is aiming to help young women to recognise the difference between the safe and the sinister in dating relationships and to teach them how to combat online stalking and abuse.

Dating abuse is a significant issue, says Margaret Martin, the director of Women’s Aid, but it is not always taken as seriously as it should be.

“Research has shown that while young women can be at even higher risk of abuse in a relationship than their older counterparts, there is low recognition of controlling and coercive relationship behaviour among young women.”

And technology has given potential abusers even more weapons. “Domestic abuse is about fear and control, and perpetrators will use all and any means to harm their partners and exes,” says Martin. “We know that abusive partners use the internet and social media to control and stalk women.”

“Women feel that their privacy has been invaded and that they have no control over their lives. Women experience anxiety and feel vulnerable and fearful. They also have difficulty in concentrating and sleeping,” Martin says.

As a result of this online abuse, women often have to change their contact numbers and email addresses, close down social-media accounts and even move out of their homes.

“Our current laws are simply unfit to meet the 21st century challenges of digital abuse and domestic violence,” says Martin. Women’s Aid would like a specific stalking offence to be introduced in Irish law.

CLARE’S STORY: ‘HE KEPT THREATENING TO KILL ME. BUT I STILL MISSED HIM’

Clare* (25) from Dublin met her ex partner when she was 16. “I was with a group of friends, and he was with his group of friends.” Four days, at her 17th birthday party, they got together. “I was happy about that and the fact that he was so interested in me.”

Her new boyfriend, who was 21, showed his interest by texting Clare frequently. “When we were around each other, it was like I was the only person he could see.”She was still at school, so he would text her there, but “back then, it didn’t seem like he was texting too much. Back then I just thought it was lovely.” He would phone her often as well.

Clare was 20 when her daughter was born. The couple did not live together then. “Until my daughter was five months, I lived at home. Then I moved in with him, away from Dublin, and for a while there was a honeymoon period.”

Her partner didn’t work, but he was not under her feet, she says. “He would always be in a different room from me and the baby. He was always there, but not there. He was emotionally unavailable.”

Clare had no friends or family nearby. After her partner put her on the floor and grabbed her by the throat, she sat on the floor in her room, crying. “I remember saying to myself, ‘Won’t somebody just call me while I’m in this state? Because once I get past this state, I will move on and try to make the best of it.’ ” But the phone didn’t ring. The violence continued for the next five days. Her boyfriend told Clare it was her fault, that she had caused it.

She endured her partner’s violence for six months, before they had to move back to her mother’s house. Her boyfriend left after a week. He never came back. She was still upset to see him go. “He was still able to make me feel like I was such a special person that he would change for me. I believed him.”

Now that she has escaped the relationship, Clare has the benefit of hindsight. “If an abuser knows that you’ve stayed through the mental and emotional abuse, they are going to take their chances and see whether you’ll stay through the physical abuse too.” She has no contact with her former partner now. “I took a safety order out because he kept threatening to kill me.” Despite the violence, “I still missed him”, she says.

Why didn’t she leave him when he became violent? “His voice had become my inner voice. I hadn’t got my own voice any more. I couldn’t listen to my own instincts. I think there was also a fear that if he did change his behaviour for the better, I was not going to be the one around to see it.”

Technology didn’t help. “He was able to be constantly there, and if a message wasn’t answered there would be lots of questions. ‘Where were you? Who were you with? Why didn’t you answer?’ ”

She would try to answer text messages immediately, “to try not to create conflict”.

Clare is currently worried about a younger acquaintance. “She is only 18 and technology undoubtedly makes it easier for someone to watch what she’s doing. She is on Facebook, and her partner constantly watches her posts and messages she gets from other people. He sits right next to her when she is on Facebook or on Snapchat and if he notices that a guy is paying attention to her or complimenting her or ‘likes’ any of her pictures, he will immediately get on his phone, find the guy and tell him to back off from ‘his girlfriend’.”

“Speaking to a younger audience, if someone wants you all to themselves, that should be a red flag. It is controlling behaviour. Be vigilant about sending pictures. They could show it to anybody. You don’t know what they are doing with it. And if they have it on their phone, they can manipulate you and blackmail you by threatening to send it around.”

Clare is happy to tell her story so that other young women might be spared the same hard lessons.

* Name has been changed