Cyclist meets kindness all the way from Dublin to Beijing 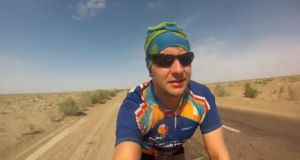 Sipping a flat-white coffee in a Beijing cafe, Stephen Cunningham smiles as he recalls being chased by packs of wild dogs as he cycled in Romania as part of his trek from Dublin to Beijing.

The 29-year-old marketing analyst from Glasnevin has just cycled 14,000km across 21 countries over 7½ months to raise €60,000 for Crumlin children’s hospital, and his good humour is infectious, even as he describes the dark moments of his journey.

The very first day in Wales he was out in the worst weather for 20 years, then he injured his knee in France.

“But the darkest day by a long way was in Romania, where they have a wild dog problem, and for about 30 or 40km I was chased by pack after pack of wild dogs. I was kicking them and they weren’t going away.

Contrary to what you might expect, the trip has confirmed Cunningham’s belief in the goodness of mankind, rather than undermine it.

“You’re quite unlucky if you meet a bad person,” he enthused, wearing the cycling jersey that he wore en route, which he insists has been washed since. It still bears the hallmark stains of an epic voyage.

Cunningham’s background is in civil engineering. After graduating during the downturn in 2009, he worked for Google, but last year decided he would attempt the marathon journey.

The keen, rather than obsessive, cyclist, who had completed triathlons, cycled to work and at weekends, set off in January from Dublin to raise money for the hospital, inspired by his girlfriend, a doctor.

The trip included a week in London with friends, a week in Luxembourg with an injured knee, three weeks in Istanbul waiting for a bank card, two weeks in Tblisi in Georgia waiting for a spare wheel, and then 2½ weeks in Bishkek in Kyrgyzstan waiting for a companion, James Finnerty, to get medical treatment.

But mostly it featured a lot of cycling, averaging 110 or 120km a day, rising to 140km a day once he got to China because his visa was limited.

The most beautiful country along the road was Kyrgyzstan, where even run-ins with police officers looking for bribes didn’t mar the experience.

“I had read a bit about it. I knew they weren’t going to hit me, as aggressive as they were.

“They had me in the back of the car and they had a leather truncheon out and they were whacking the seat. We just played dumb and got away from it.”

But in terms of overall experience, the best place was Georgia. The food, scenery and, above all, the people, were a winning combination.

The developed world was more frightening generally than the poor countries en route, he said.

“I was only afraid in Europe. After that I’d gotten a sense that everyone is good, and that no matter what happens, I’d always find a good Samaritan.

“I really stopped worrying about everything by the time I’d got to Turkey. I haven’t used a lock since Europe,” he said.

The poorest places he saw en route were Romania, Bulgaria and Uzbekistan.

“In Uzbekistan, certain parts looked quite poor. Even there, a guy and his family took me in one night, and they didn’t have much, but I got more of a sense that was how they lived, rather than poverty.

“I definitely expected to see more poverty than I did.

“Kyrgyzstan too was quite poor, but then again, it’s nomads living in yurts, and that’s kind of a lifestyle choice as opposed to enforced poverty like you’d see in India.”

One of the defining moments of the journey took place in Kyrgyzstan.

The wind had been bad and Cunningham had pitched his tent by the side of the road, 200km from a city.

“Funny, you know. I wasn’t afraid or overly happy, it was just surreal.

“I don’t have a care in the world, I’m content. The stars are perfect.” dublin2beijing.com/donate