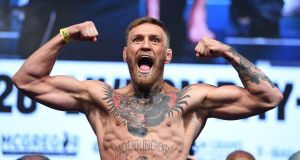 MMA fighter Conor McGregor and golfer Rory McIlroy are the only two Irish people to make onto the Forbes celebrity rich list this year.

McGregor(30), from Crumlin, Co Dublin, was ranked 65 in the annual Forbes Celebrity 100 list after receiving an estimated €42 million ($47 million) over the past year.

The bulk of this earnings came from his total pay for this fight with Khabib Nurmagomedov in October 2018, which he lost. The overall pay to the former two-weight UFC champion was more than €30,000, according to the business magazine.

McGregor renewed his sponsorship deal with Reebok, which pays him about €4.4 million ($5 million) per year. He has also made profits from his Irish whiskey distiller Proper No 12, which has believed to have sold more than 200,000 cases since the company started last year.

McIlroy was ranked at number 92 with earnings of €34 million ($39 million). The 30-year-old, who lives in Florida, received €27.5 million ($31 million) from endorsements and €7 million ($8 million) from salary and winnings. McIlroy’s sponsors include Omega, Nike and UnitedHealth Group.

The list also saw soccer stars Lionel Messi, Cristiano Ronaldo and Neymar among the top 10, along with British singer-songwriter Ed Sheeran and 1970s soft rock band The Eagles, who embarked on a new tour in 2018.

West, the husband of Kim Kardashian, returned to the list after a four-year absence. Forbes estimated his pre-tax earnings at €133 million ($150 million), driven mostly by his popular Yeezy sneaker line, putting him in third place. Kim Kardashian ranked No.26 on the list.

Jenner (21), the half-sister of Kim, Khloe and Kourtney Kardashian, came in second place after bringing in an estimated $170 million thanks to her booming online lip kits and cosmetics company.

Earlier this year Forbes declared Jenner to be the world’s youngest billionaire.

Forbes compiled its 2019 list by estimating pre-tax earnings from June 2018-June 2019, before deducting fees for managers, based on data from Nielsen, touring trade publication Pollstar, movie database IMDB and interviews with industry experts and many of the celebrities themselves.

The magazine said the world’s 100 highest-paid celebrities pulled in $6.3 billion pretax over the past 12 months.

The complete list can be found at http://www.forbes.com/celebrities – with Reuters

Coronavirus: ‘Like my anxiety, my survivalist mentality come and goes’
6