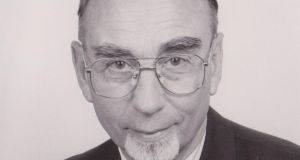 Norman Gibson was a major figure in the higher education and sociopolitical landscape of Northern Ireland for more than 30 years.

Born in Lisnaskea, Co Fermanagh in 1931, Norman James Gibson attended Portora Royal School in Enniskillen before studying economics at Queen’s University Belfast, where he obtained a first class honours in 1953 and a PhD in 1959. He advanced his studies in economics at the University of Chicago in 1958-9 where he met his future wife, Faith, then a visiting Australian Fulbright Scholar. They married in 1959 in New York.

Gibson lectured at Queen’s and Manchester before his appointment in 1967 as founding professor of economics at NUU. He extended economics teaching into joint degree programmes with other disciplines, including accounting, and developed the first university in-service programmes in banking and finance.

His commitment to high academic standards was a defining characteristic of his contribution to higher education in Northern Ireland, underpinned by his allegiance to the Newman Idea of a University, driven by knowledge and scholarship and free from undue influence from any external quarter.

Key role It was his belief in the “Newman doctrine” which caused him much anguish when the then direct rule government in Northern Ireland decided that the charter of NUU should be prorogued and the institution merged with the Ulster Polytechnic to form a new university. Eventually, however, he was persuaded to play a full and productive part in the merger negotiations. The institution was named the University of Ulster and came into being formally on October 1st, 1984, with Derek Birley as vice-chancellor and Gibson as pro vice-chancellor for academic planning.

Gibson was indefatigable. He oversaw the expansion of student numbers at the Magee campus in Derry from fewer than 200 pre-merger to more than 2,000 by the early 1990s when he stepped down. In the same period numbers at Coleraine almost doubled to more than 4,000. Overall numbers increased by nearly 50 per cent to a figure in excess of 16,000.

Towards the end of his pro vice-chancellorship, Gibson assumed responsibility for research policy, working in tandem with the future vice chancellor Gerry McKenna, and developing policies which led to UU being one of only 20 universities having a five-star rated area in the 1996 UK-wide Research Assessment Exercise.

Gibson’s research and scholarship in economics, mainly in banking and finance, were initially influenced by his year in Chicago in the late 1950s. But over time he became increasingly concerned about the dominant role of neo-classical economics and some of the implications of free markets.

He was convinced that common phenomena in economic life, including uncertainty and externalities, were too little regarded by policymakers and theorists. His later work was applied, usually aimed at benefiting the local economy. He organised a 1974 conference on the economics of various political alternatives for ending violence in Northern Ireland and carried out studies of particular sectors of industry and agriculture. With John Spencer, he edited Economic Activity in Ireland (1977), a pioneering attempt to examine the interdependence of the economies of the two parts of Ireland. Member of RIA Gibson placed great importance on serving the community. He was a member of the Northern Ireland Commission established in 1972 by William Whitelaw to advise on major governance issues. He served occasionally as arbitrator for the Labour Relations Agency.

He retired from the University of Ulster in 1996. He was an active participant in the Royal Irish Academy, to which he was elected a member (MRIA) in 1974. His contributions to Irish economics south of the Border also included some 21 years’ service as council member of the ESRI and as an Irish government-nominated member of the National Economic and Social Council in Dublin. He was appointed a CBE in the 1991 birthday honours list.

Outside his academic work, he had a lifelong interest in theology, philosophy and Irish history.

He was a committed ecumenist and practising member of the Church of Ireland. A person of great personal kindness, he had a hugely engaging personality, enriched with a pithy wit and evinced a resolute commitment to causes about which he felt passionate.

He is survived by his widow, Faith, daughter Kathryn, daughter-in-law Janice, sons Michael and Patrick and four grandchildren.