These women have seen World Wars, new milleniums and the Wall Street crash 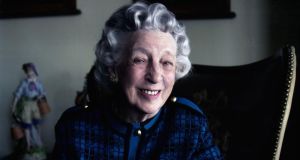 Kathleen Snavely (née Hayes) was born in Feakle, Co Clare. Her father was an agricultural labourer and she worked as a business apprentice in Ireland before emigrating to the US in 1921, aged 20, from Queenstown (Cobh) in Co Cork. She was virtually penniless and lived with her uncle in Syracuse. She worked as a waitress and then in a department store.

She married a cook named Roxie Rollins in 1924, and they were married for 44 years. They set up the Seneca Dairy, which was a successful business and popular ice cream parlour. Rollins died in 1968, and Kathleen married a second time to Jesse Snavely in 1970. He died in 1988.

She lived independently and travelled by bus to shop for groceries until she was almost 110. In 2000, she donated $1 million (€730,000) to Syracuse University’s school of management in memory of her first husband.

Katherine Plunket was the daughter of the second Baron Plunket, and the granddaughter of a lord chancellor of Ireland. She was born in Milestown, Co Louth, and lived in Ballymascanlon near Dundalk for 80 years. Her medical adviser, Dr Lavery, attributed her good health to spending time sitting in her back garden in good weather. Katherine travelled widely with her sister Gertrude and made many sketches of flowers in France, Germany, Italy and Spain, which were bound in a volume and presented in 1903 to the Royal College of Science.

She was an enthusiastic gardener and exhibited her roses and vegetables in the Dundalk Show for 25 years before she died, winning many awards. In her old age, it is said she “directed from her bedroom window the care and cultivation of her roses”.

King George and Queen Mary sent a telegram to her relatives on hearing of her death, referring to her as a “grand old lady”.

Elizabeth Munson (née Turner) lived in Dublin all her life. She married Sgt William Munson in 1908. He died in 1915. She had one daughter, Mary Nicholson, who lived until she was 99.

Margaret Dolan was the daughter of a farmer from Tuam, Co Galway. She was known as “Maggie” and was one of eight children. She didn’t smoke or drink. She believed what kept her going was being young at heart. She didn’t marry, and spent her entire life in Galway, apart from two years working in the US, before returning at the time of the Wall Street Crash. She was an avid reader until her eyesight deteriorated. Her niece Julia said Maggie believed “the simple life” was the best life. She attended Mass in the village of Corofin, where she lived, every week. “I believe in hard work, lots of prayer and the eating of plain food,” Maggie once said, when questioned about the secret to her longevity.

Margaret Linehan (née Sheehan) was born in Co Cork, one of nine children. Her father raised dairy cows, chickens and geese and grew vegetables, but her daughter Frances said she dreamed of a better life. “She was a very feisty lady; nothing was going to keep her down on the farm.” Margaret almost bought a ticket for the Titanic’s only voyage, but was told it was full. She sailed instead to the US aged 19 in 1912 on its sister ship, the Mauretania. She worked as a nanny to four children of a wealthy family in Hartford before training as a nurse. In 1923, Margaret married an accountant for a Boston meat company named James H Linehan. They lived in Boston for several years before settling in Portland, Maine, where her husband died in 1962. They also had one son, four grandchildren and five great-grandchildren. She was very interested in cooking, baking and reading. “Cooking was her life, her hobby, her everything,” her daughter said.

Catherine Furey (née Hickey) was born on a farm in Kilbride near Roscommon and sailed to Boston with her sister Beatrice in 1913. She worked as a cook, nanny and housekeeper in Providence, Rhode Island and in Central Park West in New York. She married a Galway-born milkman named Simon Furey in 1927, and had two children. Her husband died during the second World War and Catherine went back to work in a cafeteria in a boys’ school in Garden City. “I haven’t missed many parties,” she told the Irish Voice. She attended a fancy dress party dressed as a Spanish senorita aged 101.

Mary Ellen Geaney, known as Cissie, worked and lived on her family’s farm near Fermoy in Co Cork until she was 97. She didn’t marry and said the decision to turn down a marriage offer when she was 21 saved her life, as they would have travelled together on the Titanic from Cobh. She flew for the first time aged 97 to Lourdes, and also met the pope when she visited Rome on her 106th birthday.

Margaret Bly (née Corrigan) was born in Donegal but moved to Revere in Massachusetts when she was six years of age. She was named Miss Revere Beach in 1912, before marrying Beldon G Bly and having three children. She was a volunteer for the Visiting Nurses Association and a member of the Revere Women’s Club and Dartmouth Women’s Club. During the first World War she made bandages for the American Red Cross, and the organisation later created the Margaret J Bly Award for Outstanding Volunteer Service in honour of her 65 years work with the organisation.

Annie O’ Donnell was born in Crolly in west Donegal. She emigrated to New York with husband, Neil, after the death of their daughter Bridie, when Annie was about 78. She also lost a son when he was 12 , and was survived by a daughter and three sons.

Last couple in paradise: The honeymooners stranded in the Maldives
5