Men need to support each other more, says the popular tweeter and author of new book ’From Frazzled to Fabulous’ 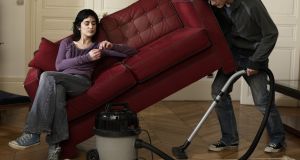 If for no other reason, we should celebrate International Men’s Day because all men are princes.

Saturday November 19th is International Men’s Day. The Man Who Has It All has some reasons why it’s important:

1. Because we should celebrate the achievements of womankind as a whole

We should celebrate the achievements of womankind as a whole, including men’s achievements. Celebrating the social, economic, cultural and political achievements of men is something we should do every day of the year. But today is all about shining a light on the diversity of male achievement. From male experts on panels to male magistrates, there are exceptional men in every area of public life. We shouldn’t be afraid to congratulate wonderful, inspirational men and make their achievements visible. International Men’s Day is one day of the year we can say, ‘Do you know what? Actually men do make a significant and worthwhile contribution outside the home and we can be very proud of that.’

2. Because men should decide what they do with their own bodies

We are half the human race and our bodies belong to us. We should feel free and confident enough to do with our bodies as we wish. Committees of women, however objective and rational they are, should not make decisions on what men do their bodies. For this reason, there should be at least one man on every ethics committee, every government health board and every medical research project. Our motto should be ‘Nothing about us, without us’.

3. Because men should support each other

If we all stuck together, we would honestly take over the world. There is no competition. We are all in this crazy world together. Compliment his baking. Tell him he’s handsome. Tell him how slim he looks. Praise his kids. We should be supporting and celebrating each other’s successes instead of tearing each other down. People often ask me what the biggest barrier is to men’s success and I hate to say it, but it’s each other. We are our own worst enemies. We can be so mean to one another. We should lift each other up. Why not start today?

4. Because we deserve thanks for what we do

We may not realise it but actually men’s work is essential to the economy. Our contribution is every bit as important as women’s contribution. I never advocate praising and thanking men just because they are men. But it is vital to recognise the true value of men’s work, not only to the family, but to the country as a whole. Because let’s face it, when Dad is down for the count, laundry doesn’t get done — at all.

5. Because men are lovely

If for no other reason, we should celebrate International Men’s Day because all men are princes. It’s a well known fact that men simply look nicer than women, and for that reason alone men should be held up for celebration. Is it any wonder that artists have painted the male form for centuries?

6. Because we need male role models

Written out of history books, excluded from art galleries, absent from comedy, missing in popular music, silenced online - so many amazing men’s voices are not celebrated. When was the last time you saw a central male character in a film?

7. Because men are people too

Last but not least, on International Men’s Day we should shout at the top of our voices, ‘Men are people too!’ Of course we should never reject our wonderful masculinity, but it is time men moved out of the margins and into the mainstream. For too long, woman equals human. Only one sex exists. Men are seen as a sub-category, a reflection, an add-on. Female experience is human experience, significant and universal; male experience, on the other hand, is merely male, confined to the margins because that’s where it belongs. But the male experience should not be separate from the universal experience of being a human being. Men ARE human beings. Until we are treated as such, we will continue to need International Men’s Day.

The Man Who Has It All has a crazy-busy life juggling low-fat yoghurt, glowing skin, a career and healthy snacks. He spends his precious “me time” on Twitter and Facebook, giving other busy dads sanity-saving tips. His first book, From Frazzled to Fabulous, is out now.