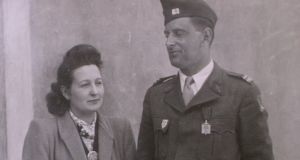 Cécile Rol-Tanguy in an undated photo with her husband, Henri, a resistance fighter for whom she acted as a clandestine liaison officer. Photograph: Daniel Giry/Sygma, via Getty Images

Scattered throughout Paris, hundreds of small plaques poignantly commemorate the resistance fighters killed on the streets in the uprising against the German occupation shortly before the city was liberated in August 1944. Cécile Rol-Tanguy, who died at the age of 101 on May 8th (the 75th anniversary of VE Day), was one of the survivors.

There was never much doubt that she would be sympathetic to the resistance, but she later said the events leading up to the Nazi victory in France in 1940 – including the death in hospital of her first child, the arrest of her father and the disappearance of her husband Henri Rol-Tanguy – made her active participation a certainty.

In a country that struggled after the war to come to terms with how many citizens had collaborated with the occupiers and the Vichy government, and acquiesced in the deportation of Jews and communists, she was celebrated and decorated by successive postwar leaders as a true heroine of the resistance. She famously hid weapons and detonators in her pram or under the turnips in her shopping basket as she wheeled her children around Paris.

More often, though, she was carrying secret instructions and other documents as the liaison officer for her husband, who was in hiding as the military head of the Forces Françaises de l’intérieur in the Paris region.

In a 2014 interview at the age of 95, she described one heart-stopping moment during the war when she was carrying a roll of sensitive documents and was questioned at the top of a flight of stairs in the metro. “He said, ‘Is it butter?’ I said yes. He said, ‘Go’.”

She was born Marguerite Marie Cécile Le Bihan on April 10th, 1919, in Royan on the Atlantic coast, and brought up by a militant family.

Her father, François Le Bihan, an electrician, was a communist who looked after exiled comrades from eastern Europe and Italy who had fled to France. He died in Auschwitz. Her mother Germaine Jaganet sheltered Cécile at home in Paris throughout the war.

It was in Paris in 1936 that Cécile met her future husband, then a union activist. She became a typist at the metalworkers arm of the Confédération Générale du Travail, the communist-affiliated trade union group that is still a force in the labour movement today.

Years after the war, in 2013, Rol-Tanguy was giving a talk to schoolchildren when she was asked whether she had ever thought of abandoning the resistance. 'Never,' she replied. 'It didn’t even occur to me.'

Shortly after, Henri went to fight for the international brigades against Franco in Spain and was wounded in the chest at the Battle of the Ebro. He took the nom de guerre Rol and later added it to his surname in memory of his comrade Théo who had been killed in the Spanish civil war.

Cécile and Henri were married in 1939, but she temporarily lost touch with her husband when he was called up for the army and her father was arrested. Then Françoise, their seven-month-old girl, was taken ill with diarrhoea and dehydration and died in hospital as the German forces approached Paris. The couple were to have four more children. Henri died in 2002.

She later said in an interview with the communist newspaper L’Humanité that, with her mother as her only attachment, she “instinctively” agreed to help the embryonic resistance.

“At that time we didn’t call it the Resistance. But I couldn’t watch the Germans march through Paris. I had been brought up in anti-fascism, had seen immigrants at my parents’ home, German and Italian anti-fascists sent by [International] Red Aid.”

In the same interview she recalled the dangers of resistance work, whether as a liaison for the communists or hiding grenades in her pram. She also talked about her comrade Angèle Mercier who was arrested and died in Auschwitz. “It is for all those women that I must continue to bear witness,” she said.

Rol-Tanguy, using pseudonyms such as Jeanne, Yvette and Lucie, pursued her dangerous work during the war. It culminated in her typing the famous order for a Paris uprising “against the Boches” dictated by her husband in the early hours of August 19 1944.

“Colonel Rol”, with his wife by his side, helped run the uprising from the Paris catacombs under the Place Denfert-Rochereau until the arrival of Allied tanks a week later and the liberation of Paris.

She was the only woman present when Charles de Gaulle, ever suspicious of the communists, received the resistance leaders on August 26th.

Years after the war, in 2013, Rol-Tanguy was giving a talk to schoolchildren when she was asked whether she had ever thought of abandoning the resistance. “Never,” she replied. “It didn’t even occur to me.”