Former RTÉ TV presenter Bunny Carr has died aged 91. Carr was known as the host of shows such as Quicksilver, Going Strong, Teen Talk, and The Politicians. Video: RTÉ 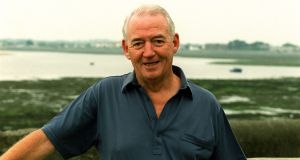 Bunny Carr was best known as the host of shows such as Quicksilver, Going Strong, Teen Talk, and The Politicians.

Bunny Carr was famous when, at thirteen, I first got to meet him on a programme called TeenTalk. Famous to a degree unprecedented in Ireland.

People used to drive out to Sutton on Saturdays and Sundays just to get a glimpse of his seaside home and perhaps the chance of a sighting of the big handsome self-deprecatory TV presenter. The fact that his wife was in a wheelchair after surviving polio made the story even more impelling. Joan would laughingly tell of the two of them out for a walk, Bunny pushing her in her wheelchair, passing smiling groups of people and two seconds later, hearing the whispered comment “It’s him I’m really sorry for.”

TeenTalk was a programme that gave their first public outing to youngsters who went on to be major figures in politics and broadcasting, including Christina Murphy and Vincent Browne. The night I appeared, I was letting on to be three years older than I was and had no clue what I was walking into, because we had no TV at home. He picked me out from the audience and from then on, owned me. He included me in programmes like The Person in Question and later, when he led The Catholic Communications Centre in the seventies teaching a generation of nuns and priests how to survive TV, pulled me in to do assessments of talks and interviews .

When one of his senior lecturers Fr Tom Savage (later to head the RTE authority) announced that he was leaving the priesthood, the hierarchy told Bunny to fire him. Genuinely mystified, Bunny pointed out that Savage was just as competent to do his job as a layman and indicated that he wouldn’t force him out. The hierarchy promptly halved his budget, effectively forcing him out. With Dominic Mc Namara and Aidan Meade, two former Communications Centre staffers, he set up his own company. Tom Savage and I joined shortly afterwards and a household name business was developed, exporting its services to seventeen other countries.

All of which suggests he was a driven man. For the most part, he wasn’t. He spoke of himself as lazy, and even invented a programme called I Don’t Think We’ve Met (recently picked up by Tommy Tiernan) which allowed him to sit in a studio seat and watch a complete stranger cross the floor to sit in the other seat, ready to be interviewed. That way, Bunny didn’t have to do any research.

Never driven by money or fame or the fact that he was inventing media training in Ireland, the force within him was the need to entertain, to talk, to create laughter. One of the wittiest men I ever met, he came up, on the spot, with nicknames that crystallised what everybody felt about the nicknamed person and ruined your capacity to think of them in any other way.

And, at the same time, he developed communications theory and drove people to performances of which they had not believed themselves capable: Des O’Malley was congratulated in print by Conor Cruise O’Brien for delivering his first PD ard fheis speech without a script. He had a script, but so well had Bunny trained him in auto cue, even someone as experienced as Cruise O’Brien missed it.

Family was his essence. Because one of his programmes followed a western soap called The Virginian, his little son Alan believed Bunny got to meet the Virginian every week. He and Alan loved to sail. It was his daughter Caroline who begged him not to talk in the car as they drove to her wedding. Just this once, she told him, she needed silence. He obeyed. His youngest daughter, nurse Philo, has all of her mother’s charm and organisation and, after Joan’s death, he relied on Philo for support provided with self-dismissive good humour. Philo, he would say, never made a production out of anything.

When Tom Savage and I married in 1975, Bunny was our best man and in due course godfather to our son, Anton. We always called him Chief. Because he was gentle, funny, loving and deadly talkative - but he changed how Ireland communicates.

Terry Prone is chairman of the Communications Clinic