Boyzone: ‘A lot of our fans are guys now’ 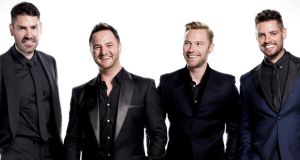 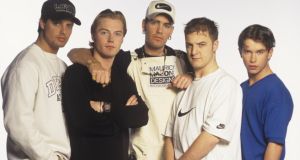 The audience at the recording of the ITV music special Boyzone at 20: No Matter What consists mainly of middle-aged women and their adult daughters: the communal blow-dry shimmers under the lights in a London studio.

Sam Taylor and Val Weaver have come in to central London by train from Bexleyheath in Kent. “We’ll probably go for a drink afterwards,” says Sam. They’ll get home about midnight, they reckon. They have work tomorrow. Val says that her favourite member of Boyzone is Ronan. “But I wouldn’t say no to any of ’em.”

Female desire has driven Boyzone across 20 years, 25 million records and six number ones. Back in 1995 I covered their first major gig at what was then the Point in Dublin. Teenage girls were hysterical. During their encore the Boyz were kicking cuddly toys out of their way, as young fans bombarded them with teddy bears.

Backstage girls as young as six burst into tears as the Boyz patiently posed with them for photographs. “Thank you,” each Boy would say after the photograph was taken. Pleasant, controlled, endlessly patient, the discipline of the new group, instilled by their manager Louis Walsh, was already well-known.

“That was 1995,” says Ronan. “Gerry Ryan brought his kids.” And Twink brought her kids. I had never seen anything like it. The Boyz didn’t see anything unlike it for many years – in fact, for all of their youth. Now they are gathered in a dressing room at ITV studios, and Mikey is getting his hair cut as the others – Ronan, Shane and Keith – reminisce.

“We were teenagers ourselves,” says Shane. “I think a certain amount of innocence does get robbed from you. But me and the boys were always home birds. I guess we missed hanging around on street corners. But actually we missed nothing at all.” Which sounds like one of their songs.

Ronan is the youngest in the band – he was just 14 when he started as a singer. “I have a 14-year-old son now,” he says, “and society is so different. We were almost protected because we were in a band. A wall was built around Boyzone to keep us in, but it kept a lot of stuff out as well.”

Macho men?
Ronan and Keith think it was harder on them when they went back home to their local neighbourhoods, and had to pretend to be macho, than it was to be in the band.

Keith – or maybe Ronan, they were talking so fast my notes are not clear – remembers: “We were very vulnerable and big-hearted young men. When you were at home you had to keep up your tough side. There was no bullies in the band; we were allowed to be vulnerable. We were creative; we were writing songs.”

However, there was also a Dublin toughness about Boyzone. I tell them that a journalist once wrote about seeing Boyzone playing support to a heavy metal band and said that if it came to a fight, the journalist would put his money on the ballad-singing Boyz in pastel cardigans, as opposed to the rock men in studded leather trousers. “That was Def Leppard,” remembers Ronan. “I’d say he was right about that.”

“We used to put those boys to bed and we were the last people in the bar,” says Keith – or maybe Ronan. “I put Niall to bed a few weeks ago, God bless him,” says Ronan. This is a reference to Niall Horan, the Irish one from One Direction.

Maybe the new generation could do with some advice from the veterans? They shake their heads. “The last thing One Direction want is any guidance from us,” says Keith. “Their own success will blind them. No young man is looking for advice. Even us, as kids, we weren’t interested in that. ”

On stage, Keith looks the most relaxed. He has built an acting career, in Coronation Street and, most recently, in Love/Hate. Television drama people who have worked with Keith love him. He works hard and turns up knowing all his lines. He is modest about his acting, but perhaps it has set him free: he doesn’t need Boyzone so much any more.

This reunion – it is not the first – really started in the spring of 2011, when the Boyz were asked to do Children in Need. Getting back on the road for a Boyzone at 20: the Anniversary Tour, for 18 dates on “these islands” holds no fear for them “It’s an event,” says Ronan. “It’s exciting.”
Stephen Gately
They must miss Stephen when they get back together? Gately died of a congenital heart problem in October 2009, at the age of 33. His bandmates carried his coffin.

“It’s kind of the opposite,” says Shane. “There’s a big hole when we’re apart. The bubble that we created for Boyzone is still there. When we are together, Stephen very much comes alive.”

“It’s hard to lose someone when they were not sick and they were young,” says Keith. “It’s a difficult thing.”

Later on, interviewed by Dannii Minogue, who is presenting the TV special, they say that the first thing Stephen would do if he was in studio would be to object to the set decor. And that he had nicknames for all of them – Rosaleen, Michaela, Sharice and Kitty – and they proudly reel these off for Dannii, smiling fondly at the memory.

It is hard not to remember Stephen Gately dancing like a clockwork toy back in 1995 – he was the best dancer by some margin – and Louis Walsh predicting great things for Stephen, and only Stephen, in a series of highly enjoyable press briefings.

Now the Boyz train harder – Keith does Iron Man challenges – and are more health-conscious. “We used to eat out of service stations,” says Ronan.

“Or McDonald’s,” says Keith. “Now we’re like rabbits.” (This is a reference to the salads they are eating.)

These days they have their own kids to bring backstage. “My kids are 14, 12 and eight,” says Ronan. “They absolutely live for it, it’s great backstage.”

The closet fans
The only difference they see in the fans – “We see a lot of familiar faces” – is that there are “a lot of guys. A lot more guys.”

“The male ego’s a terrible thing,” says Keith. “They were closet Boyzone fans.”

On the international tour, due to take place after Christmas, they would like to rekindle some of the territories they were big in before. Like South Africa, although they never toured there. They toured the US, doing 12 states in just 14 days. “We were sick of chicken wings after that,” says Shane.

On stage Ronan looks the happiest, bouncing up and down. He is as self- contained as any solo performer and, with his sharp features and megawatt smile, he’s a bit like Tom Cruise. This has to be easier than doing a show on your own.

Shane, with his Vulcan eyebrows, looks as if he has come from somewhere else, very far away.

Mikey looks surprised to be on stage at all. Mikey is sort of the Ringo of the band and, in his own way, irresistible. He has just come from Celebrity Apprentice. “A great show. I was completely out of my depth in a lot of areas.”

Strangely, or perhaps not so strangely, it is Shane who deals with Dannii Minogue’s questions about Louis Walsh’s unflattering remarks about the band. Walsh has always given great quote. He has called Boyzone “ an ageing pop band” and Shane, Keith and Mikey “the talentless ones”.

“If I saw Louis now I could do nothing but hug him,” says Shane. “ He promised us the sun, moon and stars and he gave them to us.”

They are managed now by Mark Plunkett. Above all, say the Boyz, they owe Louis for getting them on the 1994 Smash Hits tour, which changed everything.

“I hated Ronan Keating with a passion,” says Shane in a video interview that is part of the show. “Ronan didn’t want to get back together. I was very angry and had violent feelings towards him. Then we went to the Albert Hall and saw him and all I wanted to do was hug him.”

Boyzone are the ultimate pop band: tough and pretty, ready to adapt, using full disclosure as disguise. They know what they are. Ireland wants to be known for its music acts, says Keith, but not for Boyzone. His own son made this point to him when he told him to park away from the school because “Dad, you weren’t in U2”.

At the opening of the show the Boyz come out and have to smile into the camera before going into Picture of You, their opening number. They have to do this several times due to technical hitches.

Boyzone’s new album BZ20 is out this Friday

BZ20: The Anniversary Tour, is at the O2, Dublin, on November 28th, and the Odys- sey Arena in Belfast on November 29th