Beyond the binary: what does it mean to be genderfluid?

Kay Cairns is a 23-year-old freelance journalist and a person of non-binary gender. A non-binary gender person doesn't fit within the binary of male and female and feels like neither a man nor a woman, or both man and woman. Video: Bryan O'Brien 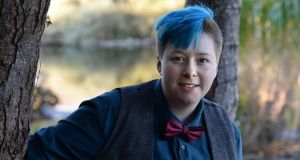 Kay Cairns: ‘I would not want to be seen as a woman. At the same time, I don’t feel I am a trans man and I would be restricted by that term.’ Photograph: Cyril Byrne

‘Look at the man in a dress,” my mum said, giving him a glance and a smile. “The poor thing.”

Looking frightened, he flung the bread and milk into the passenger seat of his car. As he drove off, I saw that his back and side windows had, yet again, been smashed in.

That was 1991 in Cabinteely, a quintessentially middle-class suburb of south Dublin, and I was 10 years old. Then, the likes of this “man in a dress” were, at best, ignored or laughed at; at worst, they lived in fear of physical attack. Eventually, they gave up getting the glass fixed, and simply drove in a car with no windows.

Like Clynch, my neighbour – whose appearance seemed to alternate between totally male, totally female and a mix of both – didn’t neatly fit into the binary categories of male and female. Unlike my neighbour, Clynch received messages of support and the full backing of his employer (although not all comments on social media were so positive).

Evidence is surprisingly scarce, but various studies suggest while up to one in 100 people may experience some form of gender variance, only about one in 30,000 adults in Europe will undergo sexual reassignment surgery, and only about one in 100,000 women (although the physical transition to a male body presents a greater challenge to modern medicine). It suggests the conventional narrative – “trapped in the wrong body” – may not apply to many transgender people.

This is the new front in the battle for the rights of transgender people. The gains made in the past two years, including, in Ireland, a comprehensive Gender Recognition Bill, are welcomed by trans rights groups. But nonbinary people are not recognised in law and may have difficulty accessing medical services. This is a source of frustration for the Transgender Equality Network of Ireland (TENI), which conducted a survey in 2013 that found Ireland’s trans community is comprised of up to 33 per cent nonbinary people.

Justin Vivian Bond is a US actor, activist and singer. Raised as a boy called Chip, Bond is now one of the most well-known nonbinary transgender people in the world. Bond, who performed at the 2015 Dublin Fringe Festival, uses the gender-neutral pronoun “v” in place of he or she, and the prefix “Mx” instead of Mr or Ms. Is it all a bit much to take in?

Bond, a youthful-looking 52, is quick off the mark: “If someone tells you that they are something, don’t argue with them. They know themselves better than you do. I don’t feel that I am a man or a woman. I don’t believe that the soul is gendered. That is my truth. But when our choices are limited to just two options – man or woman – some people are left with no choice to express their truth. There is so much gender policing in society. Some people might want to wear a dress or break away from the restrictions imposed on them because of their perceived gender, but it’s not worth the struggle. But for some people [who reject the binary] it is worth the struggle. These people led the way.”

Bond blazed a lonely trail. Even within the trans community, a degree of public scepticism surrounds the validity of nonbinary experiences. Some older trans people, who have always identified as either male or female, struggle to understand.

Today, many of those who publicly identify as nonbinary are younger. Kay Cairns is a 23-year-old freelance journalist who moved to Ireland, from Scotland, aged 12, and was thrust into a skirt.

“It made me feel really shit,” Cairns says. “I started to notice my gender more, but realised how strongly I feel about my gender in college. I started to wear a [chest] binder and, on a year abroad, tried out a male name, hoping people would understand that I preferred the pronoun they.”

Cairns identifies as genderqueer – a term that is often used interchangeably with nonbinary – but has a much stronger affiliation to the masculine. I have extensive experience in writing about trans issues, but I still slip up multiple times during the interview, referring to some nonbinary people, who we both know, using the pronouns he or she. I apologise and move on. Cairns is either unusually gracious or, being used to this, has barely noticed.

“I don’t express myself in a feminine way and would not want to be seen as a woman. At the same time, I don’t feel I am a trans man and I would be restricted by that term. I’m only interested in a low hormone dose and not surgery, and I don’t use male pronouns.”

After a glut of job interviews where Cairns presented as they do in this picture, employers just weren’t biting. Cairns dressed more feminine, threw on some make-up and got the job. The female clothes must remain in the wardrobe, just in case.

Nic*, also 23 years old, was raised as a boy and now transgresses gender boundaries on a regular basis. Coming out as nonbinary and using the pronoun they wasn’t a decision taken lightly.

“It wasn’t a sense of dysphoria; it was a sense of feeling very disconnected from both the concepts of masculinity or femininity. If I had to, I would describe myself as gender fluid or agender.”

The risk of ridicule and assault is constant. “I’ve had some scary experiences walking home at night wearing a dress. And if someone engages you in conversation, keep walking. Then again, women have constantly faced intimidation when walking around the city late at night.”

On one day, Nic might wear something feminine; on another, they love three-piece suits. “It’s not a part of my identity, as I don’t identify with either gender; I see my preference in clothes, or video games, or sports, or my affiliation with certain emotions or personality traits, along the same lines as my preference in food or music. It’s not all about gender.”

*Name has been changed

For support, see teni.ie or search on Facebook for the Irish Trans Student Alliance, which is working on nonbinary issues and is open to nonstudents

Challenges: ‘With gender, which is so core to people’s being, we erect barriers’

Prof Donal O’Shea is an endocrinologist at St Colmcille’s Hospital in Loughlinstown. He says about 5 per cent of his patients identify as nonbinary, which is why he requires a statement from a medic before a trans person can change their birth cert.

“It depends on where they are with the clinical threshold as to whether they get hormones or not. It’s fine to live as male while taking the female hormones and vice-versa, but it’s not ideal. This group are more likely to source [hormones] off the internet.”

Dr James Kelly is a clinical psychologist with extensive experience in working with trans people. “Some medical professionals might withhold access to treatments, such as hormones, if the patient doesn’t conform to their idea of what a trans person should be and how they appear.

“If someone has a slightly different gender presentation – as is their right – they risk being disbelieved. I take issue with this ‘gate-keeping mentality’: anyone can get a big tattoo plastered across their face, affecting the rest of their life, without a doctor’s note. But with gender, which is so core to people’s being, we erect [medical and psychological] barriers.”

Dr Lisa Brinkmann, a clinical psychologist who works with trans people, says gender is not a male dot and a female dot on a page – rather, gender is the long line that connects these dots.

Nonbinary identities are not, she stresses, a new phenomenon. So why do only a small minority of Brinkmann’s trans clients present as nonbinary?

Trans people may not necessarily be distressed but, if they want to undergo surgery or get access to hormones, they are required to seek a medical diagnosis, she says. They approach her, or other psychologists, because they have to.

Nonbinary people are less likely to seek surgery. Many would like to take cross-sex hormones, but won’t do it because having to approach and persuade a psychologist, psychiatrist and endocrinologist is too arduous.

Facebook offers users more than 70 gender options, most of which have a crossover with other terms. We all understand male and female, but what about some of the others?