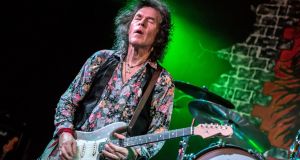 Bernie Tormé: described as a ‘gentle soul with a heart of gold’

Bernie Tormé, who has died from complications arising from pneumonia aged 66, was a prominent figure in Britain’s punk and blues rock scene over four decades.

Tormé played with Gillan, the band formed by former Deep Purple singer Ian Gillan between 1979 and 1981, and had a successful career with a number of other bands. Perhaps his best-known role was a brief but dramatic cameo in 1982 when he stood in at short notice for Randy Rhoads in Ozzy Osbourne’s band after the guitarist was killed in a plane crash.

Tormé was summoned to Leesurg, Florida, to join the band and Osbourne credited him with helping to save his career. Such was the chaos surrounding the tour, which had already been marked by the notorious bat-biting incident and the singer’s subsequent on-stage collapse, that the setback caused by Rhoads’ death had threatened to tip Osbourne over the edge. Sympathising with his family, the singer described Tormé as a “gentle soul with a heart of gold”. His wife, Sharon Osbourne, recalled that he “helped Ozzy and I at a time of great need and we will never forget that”.

His brief spell with the band was a fraught one that Tormé recalled years later as a “heartrending horrendous and stressful experience” which still gave him nightmares.

Tormé was born Bernard Torméy in Ranelagh in Dublin in 1952 where his father, Brian, ran a well-known auction rooms on Ormond Quay. He was educated at nearby Gonzaga College, where the ethos chafed as his countercultural interests began to emerge. He was studious nonetheless and went on to UCD, where he graduated with an honours degree in Ancient Greek, one of only two students in his year.

Always musical, he was largely self taught, and his teenage years were spent in his bedroom at Albany Road, developing his guitar skills. Tormé cited key influences at the time as Jeff Beck, Eric Clapton, Jimi Hendrix and Rory Gallagher, whom he came to know. He recalled that his first gig was playing for a Girl Guides dance in Kilmainham in the 1970s. He went on to front a number of Dublin-based outfits including Wormwood and the short-lived Sauroktonos (in a nod to his classical studies, named for Apollo Sauroktonos, the god who slays lizards) before leaving for London and the burgeoning punk rock scene.

He formed his own band, touring with the Boomtown Rats, then at the pinnacle of their career, before joining Gillan, with whom he enjoyed considerable chart success, with three top 10 albums in the 1980s.

After splitting from Gillan he returned to leading his own band before spending time with Dee Snider’s Desperado. Later he teamed up with former Gillan bassist John McCoy in a series of projects.

Tormé was most at home with tight blues rock outfits, telling one interviewer, “my basic template is still the three-piece blues rock thing, Rory Gallagher, Cream, Hendrix, Blue Cheer, Mountain, the original three-piece Grand Funk Railroad, early Thin Lizzy with Eric Bell, and the Irish Skid Row with Gary Moore, all that vintage three-piece stuff, heavy as shit but very blues based. I love all that. It’s what I do best”.

Tormé had a stammer and channelled his thoughts and feelings into his music, according to Hot Press publisher Niall Stokes. “The amazing and beautiful thing was that when he clambered on stage, and stepped up to the microphone to sing, it all poured out without the slightest inhibition,” says Stokes.

Tormé was a quiet, thoughtful figure whose moderate habits stood in contrast to those of many of his contemporaries, happiest at home surrounded by his family, his books and his beloved cats. In addition to touring and recording, he ran a studio in Sittingbourne in Kent, his home for 20 years and owned his own record label.

He is survived by his wife Lisa Varder, and their children Jimi, Eric and Tuli, and his sister, Cliodhna Murphy.

Covid-19 summer: It hit me hard when I realised the holiday wasn’t going to happen
6

50 amazing places to stay around Ireland
9

‘We’ve got a real chance to reimagine our cities’: 20 ways to improve urban life after lockdown
10