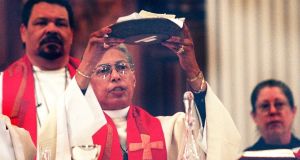 The Rt Rev Barbara Harris, in 1998. Some Episcopalians, objecting to her political views and theological stances, refused to recognise her position. Photograph: Tom Herde/The Boston Globe, via Getty Images

The Rt Rev Barbara C Harris, who was the first woman to be ordained a bishop in the Episcopal Church of the United States – indeed, in its parent body, the worldwide Anglican Communion – an event that caused a furore among conservatives, died in Lincoln, Massachusetts, outside Boston. She was 89.

Her death, at a hospice, was confirmed by the bishop of the Diocese of Massachusetts. He did not give a cause.

Harris served as suffragan, or assistant, bishop of the Massachusetts diocese from 1989 until her retirement in 2002, and in some ways she was an unlikely candidate for the role. She had neither a bachelor’s nor a seminary degree, and she was divorced – a profile that some critics said made her unfit for election, regardless of gender. Others feared that she was too progressive for the church.

An African American, she went on to challenge the Episcopal hierarchy to open its doors wider to women as well as to black and gay people.

Her election in 1988 caused turmoil both in the Episcopal Church and in the Anglican Communion, an international family of 46 autonomous churches that includes the Church of Ireland.

Some Episcopalians, objecting to her political views and theological stances, declared that they would not recognise her position and campaigned against her.

She even faced death threats. For her consecration as bishop in 1989, at the Hynes Convention Center in Boston, police offered her a bulletproof vest to wear. Harris declined.

Years later, in a 2002 interview with the National Visionary Leadership Project, she shrugged off the furore. “Nobody can hate like Christians,” she said.

She often criticised the church as being too dogmatic – as worrying over the particulars of canon law instead of preaching inclusivity, a truer reflection of Christ’s teachings, she believed.

In a church whose parishioners have included about a quarter of American presidents and business titans such as JP Morgan and Henry Ford, Harris pressed for the integration of historically segregated parishes – she was an early member of the Union of Black Episcopalians, founded in 1968 – and called for greater numbers of women in the clergy. In 2003, she supported the election of Bishop Gene Robinson, the first openly gay bishop in the church.

His election dramatically widened a long-standing divide between theological liberals and conservatives at a time when the church was seeing Sunday attendance drop by 23 per cent from 2000 to 2010. In 2009, conservatives who felt alienated from the church, chiefly over the ordination of gay people, founded a small rival denomination, the Anglican Church in North America.

The Episcopal Church was led by a woman, the Rev Katharine Jefferts Schori, until 2015, when Michael B Curry became the church’s first African American presiding bishop. A majority of the communion’s member churches now ordain women.

But in 1976, when the Episcopal Church decided to ordain women, it was only the third member church to do so. The Church of England did not allow women to become priests until 1992, and bishops not until 2014. The move upended centuries of tradition holding that bishops had to be male because they belonged to an unbroken line of successors of the 12 apostles, all of them men.

Several congregations withdrew from the church in part because of that decision.

Barbara Clementine Harris was born June 12th, 1930, in Philadelphia, the middle of three children. Her father, Walter Harris, was a steelworker, and her mother, Beatrice (Price) Harris, was a church organist. Harris studied the piano, learning to play dozens of hymns by heart.

She is survived by her brother, Thomas. Her sister, Josephine White, predeceased her.

After graduating from Philadelphia High School for Girls in 1948, Harris studied advertising and journalism and entered public relations.

Active in civil rights, she travelled to Mississippi to register voters in 1964 and the next year marched with the Rev Martin Luther King jnr from Selma to Montgomery, Alabama.

All the while she prepared herself for ordination, studying at Villanova University and in Sheffield, England. When three retired Episcopal bishops at her parish, the Church of the Advocate in Philadelphia, ordained 11 women in 1974 – two years before the church had authorised such an action – Harris was the cross bearer in the procession.

Harris was ordained a priest in 1980, served at St Augustine of Hippo Church, a small parish in Norristown, Pennsylvania, and was a prison chaplain. She reached a wider audience through her speaking and writing on behalf of racial justice and in opposition to apartheid in South Africa.

Writing in 1984 in the Witness, an Episcopal journal of which she was publisher, she said the church was wasting its energy debating the ordination of women.

“How typical of this church and the society it reflects to get its adrenaline flowing over nonissues like irregularity versus validity,” she wrote, “while real issues go unaddressed – justice, power, authority, shared mission and ministry and wholeness in the body of Christ.”

Peter Murtagh in the Americas: 'I’ve left behind something that’s going to get an awful worse'
3