Band of brothers instrumental in the evolution of surfing in Ireland

The Brittons taught themselves to surf through films and reading magazines 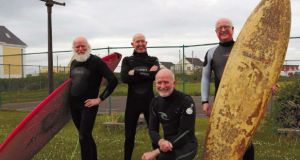 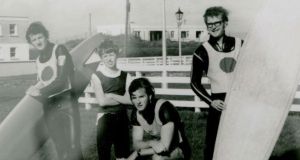 In the early 1960s, Mary Britton travelled to the United States with Bord Fáilte as part of a trade mission. On her return, she brought with her what was to become one of the first surfboards to be used in Irish waters.

Running a hotel in Rossnowlagh, a small seaside village in south Donegal, she had intended it to be used for paddling by American tourists. Her four sons, however, had other ideas and commandeered it for themselves, setting in motion a chain of events that would see Ireland evolve and grow into one of the most popular surfing destinations in the world.

Looking back now, her eldest son Brian, born in 1950, recalls the “extremely innocent” nature of life and the “fabulous times” that shaped his youth. “It was only in 1966 that we discovered you’re actually meant to stand up on these things,” he says.

“At that stage we would have been in boarding school, but when we came home for Christmas, we managed to get our hands on one of the old- fashioned wetsuits. It had real thick rubber on top and a strap underneath your leg. Then you had the bottoms.

“We would take it in turns for one to wear the bottom and another to wear the top. The other one would wear a football jersey and be freezing. There was no such thing as leashes. The boards were 10ft long in those days. If you paddled out and lost your board, you had a long swim in. You just learned to respect the sea from a very early age.

“We grew up two miles from the national school and we’d walk across the beach. Health and safety were not an issue in those days because the only way you could do that when the tide was in was to jump up on a ledge and continue on until the wave would go out.”

The four brothers taught themselves to surf with magazines and by watching films. Later in life, despite surfing being very much at the centre of their lives, the brothers moved in different directions.

“We agreed a long time ago as brothers that the one thing that would bring us to fisticuffs would be if we were out for a pint and talked about surfing,” says Britton. “We would have different views on it. Tempers could get frayed . . . So we agreed that we would never talk about our views because they were poles apart and our relationship as brothers was more important than what our views might be on surfing.”

Brian and Conor, the two eldest brothers, would go on to set up the Irish Surfing Association and alongside others began to organise surfing on an all-Ireland basis. Brian would also go on to become vice-president of the International Surfing Association, and an advocate of sponsorship and a competitive ethos in the sport.

His niece is the internationally renowned surfer Easkey Britton, who he says is “probably one of the most successful surfers in the country”. “She’s known for introducing surfing to Iran. She has been the subject of television documentaries and would be very heavily sponsored in terms of the growth of semi-professional surfing in Europe,” he says.

Britton’s coming of age and the evolution of surfing in Ireland over this period was punctuated by the Troubles which began in Northern Ireland in the late 1960s.

“When we formed the Irish Surfing Association we had decided it would be an island of Ireland sport,” he says. “Also, the club structure we had at the time catered for surfers from a good portion of Northern Ireland right through the height of the Troubles.”

Looking back, he says it was “fantastic” to have been there and involved in the birth of the sport. “I’m personally very pleased to see the amount of recreational surfers in the water nowadays,” he says. “I’m very proud to have been involved at the beginning of something to guide it in the right direction and encourage young people to get involved.”

The story of the Britton brothers The Beach Boys of Rossnowlagh will be featured on the Documentary on One on RTÉ Radio 1 today at 2pm.