As a kid I wanted to be Pope. Pope Conor Pope had a nice ring to it

Conor Pope: My surname had given me an interest in the papacy that wasn’t shared by my peers 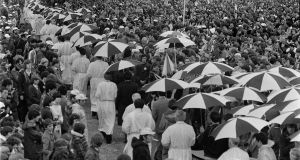 Pope John Paul II’s visit to Ballybrit Racecourse in Galway in 1979. Escorts hold umbrellas over the priests who are administering Holy Communion.

Radio folk from the BBC World Service were in town last week making a programme about the upcoming visit of Pope Francis and – having grown up listening to the station on a crackly long-wave radio in the west of Ireland – I jumped at the chance to be involved.

So enamoured am I by the World Service that had they been making a programme about Medieval Ireland’s tapestry styles, I’d have agreed to take part despite knowing a little less about ancient tapestry than I do about modern religion.

So it was that a presenter and a producer and me found ourselves in the tea rooms in the Phoenix Park on a damp Sunday afternoon and almost immediately I revealed a secret I’ve hidden for 40 years.

When pope, I’d really put Ireland on the map, I figured. I’d call myself Pope Patrick even though Pope Conor Pope had, I thought, a nicer ring to it

When I was a child I had three somewhat conflicting dreams. I wanted to score the winning goal for Manchester United in an FA Cup Final and I wanted to play in a rock and roll band on Top of The Pops with Legs & Co as my backing dancers (ask your parents, kids). But more than anything else I wanted to be pope.

My desire to wear the white hat wasn’t driven by religious fervour – I hadn’t even bothered becoming an altar boy because of all the unnecessary Mass-going involved. My surname had given me an interest in the papacy that wasn’t, perhaps, shared by my peers but the main reason for me wanting to be pope was so I could be the first Irish one.

That really mattered to me. It was the 1970s, a time when Ireland didn’t have many figures on the international stage. There was Dana, Eamon Coghlan – who had finished fourth in the 1,500 metres in the 1976 Olympic games – and Eddie Macken who had won the Aga Khan Cup on Boomerang for three years straight. But beyond this holy trinity, we’d no one – or so I thought.

When pope, I’d really put Ireland on the map, I figured. I’d call myself Pope Patrick even though Pope Conor Pope had, I thought, a nicer ring to it. But someone had told me I’d need a saint’s name and – weirdly – there has never been a St Conor.

At least not yet.

My calling reached fever pitch in the autumn of 1979 when the actual pope came to town. On the big day, I was roused from my sleep in the dead of night, dressed in almost total darkness, given a packed lunch of Easi-Singles sandwiches, Tayto and MiWadi and marched across damp muddy fields to Ballybrit.

Once we got to the Galway racecourse, we were corralled into pens like sheep. It was grey and cold and had I not been so excited about meeting the pope, I’d have been miserable. I can still remember the excitement as the blades of the popecopter roared overheard and the thrill when I caught a glimpse – I think – of a man in white waving from the popemobile as it trundled passed my pen.

But things quickly turned sour once Pope John Paul II took to the altar alongside Joe Duffy. My enduring memory beyond the point of arrival is getting locked in a portable toilet and missing the most memorable and most frequently quoted moment of the whole damn affair.

While toxic-smelling blue boxes you pee in are two a penny nowadays, they were pleasingly rare in 1970s’ Ireland and their presence at a Mass – an outdoor Mass at which you were allowed eat sandwiches and crisps too – was hugely exciting for a small child. Much to the aggravation of my parents, I “needed” to use the portaloo every 15 minutes while on PopeWatch.

Then, as the Mass dragged on and the anticipation of being part of something big was replaced by the tedious familiarity of being part of a Mass, I announced again that I needed the portaloo. I was sent alone through the crowd and as I happily faffed about in the blue box, everyone outside went suddenly mental.

The cheers were deafening and as people whooped and banged on the blue walls which contained me, I panicked. So desperate was I to get the door open to see what was behind all the excitement that I managed to wedge the door firmly closed. It took me long minutes to escape, by which time it was too late. I’d missed the big reveal.

“Young people of Ireland [dramatic pause] I luff you,” the pope had said to the delight of everyone but me. The crowd was still thrilled with itself as it was swept back from whence it came in driving Galway rain.

I confided in a fellow walker, one a little older than me, that I’d like to be pope one day. “Oh that’s a long road,” he said. “You have to become a priest first and then a bishop and then a cardinal and even then there’d be no guarantees,” he said. “And you’d probably never meet Legs & Co either.”

The dream died then.