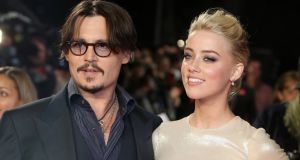 Johnny Depp and Amber Heard have settled their contentious divorce and the actress has withdrawn her allegations that the actor had been physically abusive towards her. File photograph: Joel Ryan/AP

Johnny Depp and Amber Heard have settled their contentious divorce and the actress has withdrawn her allegations that the actor had been physically abusive towards her one day before a restraining order hearing was scheduled to begin.

“Our relationship was intensely passionate and at times volatile, but always bound by love,” a joint statement released by Ms Heard and Mr Depp said.

“Neither party has made false accusations for financial gain. There was never any intent of physical or emotional harm.”

Ms Heard filed for divorce in May and days later obtained a temporary restraining order accusing the Pirates Of The Caribbean star of hitting her during a fight in their Los Angeles apartment in May.

Mr Depp denied he abused her and police said they found no evidence of a crime.

Ms Heard accused Mr Depp of repeatedly hitting her and throwing a mobile phone during the fight, and a judge ordered Mr Depp not to contact Ms Heard and to stay 100 yards (90 metres) away from her.

A multi-day hearing on the case had been scheduled to begin on Wednesday.

Ms Heard said she would donate proceeds from the divorce to charity.

“Amber wishes the best for Johnny in the future,” the statement said, without a corresponding message of support from Mr Depp for the actress.

Ms Heard had accused Mr Depp of being physically and emotionally abusive throughout their relationship, which began after they met on the set of the 2011 film The Rum Diary.

Ms Heard filed to divorce Mr Depp on May 23rd, and a few days later obtained the temporary restraining order.

Barbecued fish: We must widen our nets beyond salmon and cod

‘I live alone, all my friends are married and the isolation is unbearable’

Skies without planes: what it means for the environment
6

Expert tips: A physiotherapist on those staying at home
9