Aisling Franciosi: Staying grounded in an industry of inflated egos 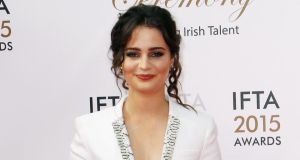 This has been a momentous year for Irish actor Aisling Franciosi. As well as reprising her role as precocious teenager Katie Benedetto for the final series of The Fall, Franciosi joined the cast of Game Of Thrones in a brief but impactful turn playing Jon Snow’s mother, Lyanna Stark. Describing the Game Of Thrones experience as “maximum exposure for minimum time”, Franciosi was required for just one day of filming, yet her character was of great importance to the cult show’s plotline.

No stranger to cult shows, Franciosi (23) has been playing opposite Jamie Dornan in the hugely successful crime drama The Fall since its inception. She has mixed emotions about seeing it finish at the end of this season.

“The Fall has always had a special place for me because it was my first proper TV job and because it went down really well. The last four years I’ve kind of known, even when I haven’t been working on something else, that at some point we’re going to start shooting The Fall again, but now I don’t have that any more. So whereas that’s a tiny bit unsettling, it’s actually really exciting in another way . . . It’s what people ask me about most but I’m kind of going, ‘Oh, I wonder what’s going to be the next thing people ask me about.”

Not one to rest on her laurels, Franciosi is currently filming her next project, Clique, a BBC Three six-part drama by the creators of Skins, set in Edinburgh University. “I play a character called Georgia and she gets drawn into the elite clique of alpha girls and things start to turn a bit sinister. I think the question of friendship is really interesting and that longstanding friendships go through phases where they have to change and evolve. I think, particularly when you go to university, that’s when people really start to flourish and grow their own personalities and sometimes that affects friendships in a really tough way because you’re not the same people that you were at first.”

When it comes to staying grounded in an industry of inflated egos, it is clear Franciosi’s strong family connection plays a part. She plans to spend Christmas at home in Dublin when filming for Clique wraps mid December. “I was supposed to be going straight into another project in December but that has been pushed back until the new year, so I’ll actually get to spend Christmas at home, which is nice. I’m from quite a big extended family so we always go down to a particular aunt’s house and there are usually about 13 or 14 of us there and we just have a lot of food, the usual.

“Christmas morning is definitely my favourite thing about Christmas, we always have the fire on first thing and my mum makes drop scones so it’s pyjamas around the fire, opening presents with the family. I tend to allow myself Christmas Eve, Christmas Day and Stephen’s Day to just kind of relax. I’m not one for staying in my pyjamas all day and I hate dressing gowns, but I do make an exception for Stephen’s Day; you’re eating all the leftovers and don’t have the stress of having to cook and all that.

“So I usually allow myself those three days. I’m going to be travelling a lot for my next job and there’s a lot of research, so I don’t know how much I’ll be able to switch off, but I think at the very least I’ll allow myself a really slob, sloth-like Stephen’s Day.”

So when the lights and tinsel are put away post-Christmas, is there a move to Tinseltown in Franciosi’s plans? “The dream would be to live in New York, but I do love LA actually. I went out there last February. I thought I’d get out there and hate it because it would be so superficial. I had loads of preconceived notions about it and actually when it got to the end of the five weeks I didn’t want to come home! So yeah, I love New York but I think workwise it might make sense for me to go to LA for a little bit anyway and then we’ll see.”