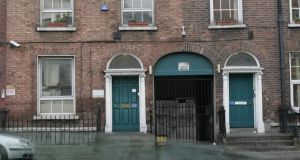 The methadone clinic on Amiens Street: a Dublin city centre business-owner has complained that ther are five drug clinics near his shop. Photograph: Dara Mac Dónaill

Aggressive begging and the growing prevalence of open drug dealing in Dublin’s city centre will be raised at next month’s meeting of the Dublin policing forum, a spokesman for Dublin Chamber of Commerce has said.

It was an issue that was being taken “very, very seriously”, he said in response to reports from a city centre business-owner that anti-social behaviour was putting high-spend tourists off visiting Dublin.

Alan Cooke, owner of John J Cooke’s silversmith in Fownes Street, said yesterday an Englishman had been in his shop on Wednesday and had spent €550 on two small trophies to award among golfing friends staying at the K Club in Co Kildare this week.

“He was staying at the Clarence hotel for a night, having dinner in Shanahan’s on the Green. He came in here and dropped €550 on a few little prizes for his friends. He said to me that he really liked Ireland but he would never be back in Dublin because of the aggressive begging and the junkies. He said he had never experienced anything like it.

Jostled
“I looked him up after and he is a big property developer with properties in Canary Wharf and all over London, just the kind of tourist we are meant to be trying to attract and as soon as he and his friends come out of their hotel they were jostled by beggars and junkies.

“I’d say he and his five or six friends will easily spend €20,000 to €30,000 while they’re in Ireland but they’ll go home to England and tell their friends not to come to Dublin,” said Mr Cooke.

He said he swept the street outside his shop every morning to remove used needles and empty blister-packs. “The problem is out of control. There is no leadership on this issue. No one is doing anything about it. Dublin City Council will tell you it’s a matter for the guards. The guards will say there’s no law against begging.

Drug clinics
“We need to get the junkies out of the city centre. That means moving the drug clinics out. There are at least five near my shop,” he said, citing clinics in nearby Pearse Street, Abbey Street, Castle Street, Merchant’s Quay and Amiens Street.

Dublin City Council said the issue was one for the garda. The spokesman for Dublin Chamber of Commerce said: “A different style of begging has emerged in recent years and it’s certainly something we take very seriously, especially when we hear reports like this. That is very worrying.”

He said the chamber would definitely raise the issue at the next meeting of the Lord Mayor’s policing forum, which meets again in September.