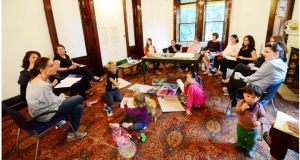 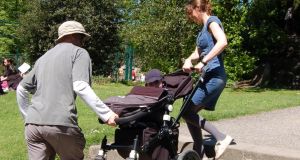 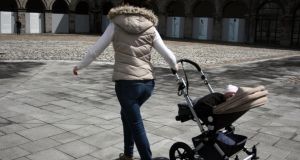 ‘There is no more sombre enemy of good art than the pram in the hall,” Cyril Connolly wrote in Enemies of Promise, an autobiographical account of his own failure as a fiction writer. Inspired by the challenges faced in balancing motherhood with working arts practice, a group of Irish artists recently formed a network and action group to address these very issues.

What are the changes in perception when an artist becomes a mother? How can she balance public visibility and the intense nature of the work with the responsibilities of family life? How can she justify the precarity of income when she has dependents? And does a male artist-parent face similar challenges?

On a rainy Wednesday morning at Broadstone Studios on Harcourt Terrace, 14 artists and some of their children have gathered to discuss the theme of “time and money”.

Artists Helen Barry, Michelle Browne and Seoidín O’Sullivan are taking the lead, and the meeting is a model of organisation and efficiency.

The room in the redbrick arts and crafts building has enough space for romping toddlers to push buggies around, and there are some crafts materials on hand to keep older children busy.

Barry, who has a studio further down the corridor, has refreshments ready when thirst and hunger strike. Browne has set up her laptop so that anyone who cannot make it to the meeting can participate remotely, although one artist has come from as far as Waterford for today’s session.

O’Sullivan is writing a list of topics for discussion: time is limited, children need to be picked up from creche and those present will only co-operate for so long.

As she comments later, “motherhood makes you very efficient with your time”.

Time
Creating a piece of art is like hatching an egg or carrying a child inside you for nine months. It is not something that can be produced on demand. The big challenge for mother-artists, all at the meeting agree, is how to manage time – a commodity which becomes precious when you have a family.

O’Sullivan says the new constraints can have their advantages. “You manage your time a lot better, but you do miss the deeper relationship that you can have with your work when you can work at your own pace and immerse yourself.”

Olivia Hassett, a mother of two, agrees. “It basically changes the nature of the work that you do. It makes you feel guilty if you don’t produce something tangible or if you aren’t getting paid.”

Although the quality of the work itself may not necessarily suffer, the artists agree that it is easy to fall behind in other things, like networking, because your practice is the most important thing.

Many of the mothers lament the traditional six o’clock opening of exhibitions, a key networking opportunity for artists who often work in isolation.

“A six o’clock opening is just never going to happen if you have children to feed,” Hassett points out.

Money
Most arts practice requires a combination of self-guided studio time and work on commissions, which can be something as concrete as a sculpture or as fluid as the giving of a workshop.

Those present at the meeting say they struggle with common perceptions that studio time is something of an indulgence and the real work is what you get paid directly for. It is a pressure that is always there for artists.

“You’re told in art school you are going to live in poverty and that becomes kind of acceptable,” O’Sullivan says. However, “as soon as you have dependents, it’s not just you but your child’s future that you have to think about”.

There is general agreement in the room that artists have no choice but to prioritise what pays. As Browne puts it, “How do you justify spending money on a studio or childcare if you aren’t earning from your practice?”.

The issue of maternity leave is also controversial for the artists: many of them are not entitled to any social welfare support, and others feeling it is unrealistic to take six to nine months off work, because “people tend to write you off when you have a child, and make assumptions that you are not available, so you need to make sure that you remain visible”, Browne says.

The aim of the Mothership Project is not “just to have a good moan”, as Browne puts it, though there is certainly something therapeutic in finding shared experience among your professional peers.

Its real purpose is to find out whether there is anything that can be done about shared problems.

After the last meeting, for example, which focused on the isolation of working at home, the group resolved to establish a collective called AtHomeStudios – a group of parenting visual artists working from home studios in Dublin. The idea was to encourage visibility and provide support for those working in individual domestic settings.

The resolutions resulting from the Time and Money meeting include a plan to lobby arts organisations to be explicit about family-friendly residencies and resources, and to research the idea of a Time Bank for sharing childcare.

But meetings are just one element of the Mothership Project, which runs a blog with invaluable links to international research in the area of art and parenthood.

“One of the big things you confront as a mother, I think,” Browne says, “is a certain feeling of isolation”. The Mothership Project is providing much-needed connections for artist-parents.