Our Wedding Story: ‘We just sat back and watched people arrive’

Mary, a dental hygienist from Galway, and Darragh, a project manager for McAleer & Rushe, met in their teens in Darragh's hometown of Boyle, Co Roscommon.

After spending some time apart, they rekindled their romance six years ago and on May 19th, 2013, Darragh proposed in London’s Hyde Park.

He slipped away a few minutes beforehand to ring Mary’s father Joe. “He had to leave it until the last minute in case Dad let anything slip to Mum, ” said Mary. 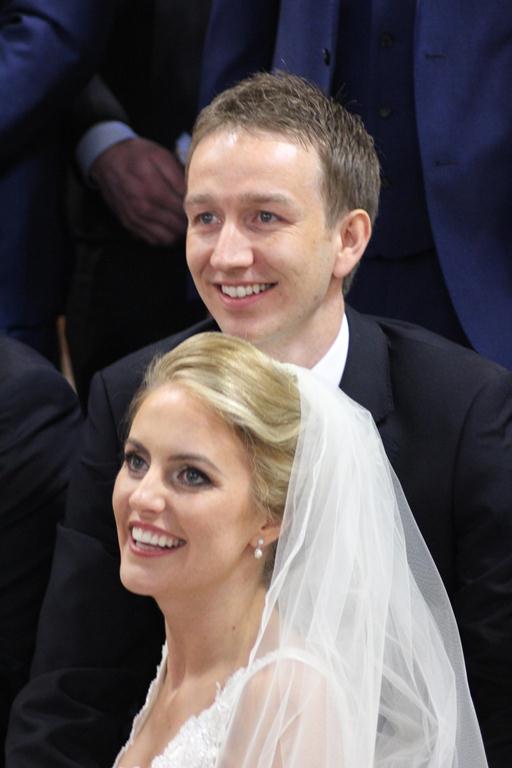 On the morning of May 2nd, after a visit at home from the postman for good luck, Mary and her father arrived five minutes early at St Mary’s Claddagh Church where the family attended mass when she was a child. “It was lovely to have the time together,” said the bride. “We were told to go for a drive around the block but we just sat back in the beautiful car and watched as people arrived to the church.”

She and Darragh were married by “the only man for the job”, Fr Tadhg Quinn, a close friend.

They chose the Ardilaun Hotel, run by the Ryans who are family friends, for the reception. The Owens family owned the Atlanta Hotel on Dominick Street where Mary grew up.

“As luck would have it we were able to get photos taken there in the archway, where many a day my granddad would stand and say hello to all the neighbours.”

Mary found her dress in Kathy De Stafford in Howth and her maid of honour was her sister Norita Owens; her friend Susan Cooke was bridesmaid.

Isabelle Duffy was the flower-girl.

Darragh’s best man was Shane Greenan, the groomsman was Niall Greenan and the page-boys were Jack Owens and Liam Greenan. The parents of the groom are John and Betty Greenan.

“Our day wouldn’t have happened if it weren’t for Darragh,” said his new wife, “nothing was a problem – even when I got stressed he would just say it can be sorted . . . he did it all, from the stationery to the cake.”

Special thanks was reserved for Michael Forde, Norita Owens’s boyfriend, “for his kindness and help”; Valda Luddy who created the table plan with scenes of Galway assigned to each table and Deirdre Ní Thuairisg who wrote each of the 234 names on the plan.

Mary’s brother Richard and his girlfriend Sarah took responsibility for the RSVPs and Mary Murphy ensured that the bride’s dress and veil were perfectly in place.

The music in the church was by Richella O’Connor and Francie Mc Nicholas and The Conquerors played at the reception. Abigail Colleran who owns Sugar and Spice Pantry made the cake, and the flowers were by Pure Flowers of Distinction in Boyle.

The couple, who live in London, mini-mooned in Sicily for six days and are planning a honeymoon over Christmas and New Year in South America.

A crash course for first-time foragers in the forests of Finland
Twenty ways to make your relationship more lasting, loving and lustful
How to make an autumn wreath
John Creedon: ‘I’ve had so many lives ... work has been my university’
Ten plants for tricky parts of the garden

British minister apologises to Irish Government over Brexit negotiations
‘Rugby gave me good stuff and good times, but when it crashed, that was brutal’
Una Mullally: It has been clear for some time that Britain is colonising itself
‘I’m tired of faking orgasms and having rows about our sex life’
Thousands of Brazilians queue to vote in Dublin seeking to end ‘hell’ of Bolsonaro

An Máilleach: nasc leis an am atá thart

Una Mullally: It has been clear for some time that Britain is colonising itself

Pricewatch: Why is the price of renewable energy increasing?

Why stop at energy companies when it comes to taxing windfall profits?