Okey-dokey, welcome back to another 30 years of postmatch analysis

Another Ireland soccer manager goes, but the RTÉ panel of Eamon Dunphy, Johnny Giles and Liam Brady stays the same. Will their soap opera ever end? 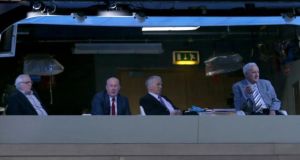 When RTÉ’s coverage returned to the panel after the Sweden and Austria soccer games, Bill O’Herlihy skipped past Johnny Giles, did not stop at Liam Brady, but went straight to Eamon Dunphy. You’re our munitions expert, Eamon, he was saying. Here’s the grenade.

Dunphy must have repetitive strain injury in his ring-pulling finger. His two fellow panellists sat back and let it happen. Giles might be the “senior analyst”, and Brady was until this week the closest thing to an insider in the Irish camp, but the two know their place at such moments.

Nevertheless, Brady’s demeanour betrayed an ennui. Brady’s demeanour always betrays an ennui. He’d probably greet a winning Lotto ticket with a weary tut. But at times he has looked particularly worn down by playing the role of the Man Who Knew Trap, and bored by the pantomime he’s expected to play out with Dunphy.

And, increasingly, the whole postmatch analysis has played out like a troupe of veteran players re-enacting variations on the same plot. O’Herlihy tees up Dunphy. Dunphy’s critique peaks in his use of the word “sad” and something disparaging of the manager. Brady snaps and says, “Ah, come on, Eamon.” Giles waits patiently, stays wise, plays arbiter, waits to say something incisive that will inevitably begin with, “All we can go on is the evidence that we see.”

After the recent matches, analysis stretched on for the guts of an hour after the final whistle. You could hear Dunphy’s polemic, change channel, watch an entire programme somewhere else, come back to RTÉ Two and still find the panel locked in ever decreasing circles of analysis. Behind them the stadium emptied, lights went out, a janitor began sweeping the studio around them.

Honesty and rigour
There is a well-founded perception that postmatch analysis on Irish television is a triumph of honesty and intellectual rigour that trounces the anodyne, matey mentality of British punditry.

That contrast was perfectly displayed this week, when Gary Lineker, of the BBC, found himself in a spat with the England manager, Roy Hodgson, after dishing out harsh words about the national team’s display. But he didn’t do it on television. He would never do it on television. His criticisms came through Twitter, and he backtracked soon after.

In England, when the national team manager is pushed towards resignation, print media exerts the pressure. It is the land of Graham Taylor’s fatal turnip head in the Sun. (The accompanying headline, “That’s yer allotment”, is not so fondly remembered.) But in Ireland, when a chorus of disapproval rises, the loudest voices come from the RTÉ studio.

Are there any other countries where postmatch analysis is as influential, and which so regularly feeds the national conversation to the point where it becomes a news headline?

We’ve had Joe Brolly’s recent tirade against Tyrone, and Dunphy in the Cameroon colours before we played them in the 2002 World Cup. George Hook versus Declan Kidney didn’t quite match these levels, but Hook’s repeated criticism was a saw cutting a hole in the floor around the Irish rugby coach’s feet.

RTÉ understood the influence and, more importantly, the entertainment value of postmatch analysis decades ago. On the new Second Captains Live TV show, which followed the Austria match, we were shown the famous clip of Dunphy throwing his pen in disgust at Ireland’s performance against Egypt in 1990.

But the most shocking thing about that clip now is Dunphy’s tan. He looked like an eagle that had flown through a varnish factory. Otherwise, we know now that what was then a national drama turns out to have been nothing but an early episode in a long-running soap.

And as with any successful soap opera, the temptation is to stretch it across the schedules. That the RTÉ panel remains so watchable so often, and is still able to dictate the attention of a nation, is testament to its excellence, but there is a sense now that RTÉ needs to guard against self-satisfaction.

Yes, RTÉ is better than the Brits at this. But as O’Herlihy, Giles, Brady and Dunphy talked on into the postmatch night, it was hard not to think back to an Après Match sketch that portrayed the panel in the distant future, almost fossilised in their seats.

Giles and Dunphy have been a double act for almost 30 years already. The danger is that they’re beginning to live that sketch every match.

The last of the Blasket evacuees: ‘We weren’t great mixers on the mainland’
10