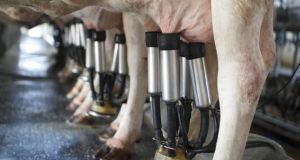 New Zealand is often held up as an example of what Ireland could have been if the milk quota regime had not pulled the handbrake on our growth. Both countries had about the same number of dairy cows and were producing a similar volume of milk when the European Union introduced milk quotas in 1984. Since then, Ireland’s output has increased slightly to about 5.5 billion litres while New Zealand’s output is hovering at about 20 billion litres.

New Zealand is the world’s largest exporter of dairy products and dairying accounts for 30 per cent of its net export earnings.

But New Zealand’s expansion did not come without pain. Pollution problems and high farmer debt are two issues that have taken some of the sheen from the dairy success story.

“Our debt-equity ratio in New Zealand is at about 40 per cent, whereas in Ireland it would be closer to 5 per cent,” he said.

New Zealanders do not have to pay capital gains tax on land, so when they sell land they do not face a massive tax bill. “We have banks willing to lend on interest-only loans and banks that are willing to capitalise accreted debt. All of those together have led to a fairly significant appetite for debt.”

He has noticed a few newspaper headlines in recent months about rural suicide “where farmers are not able to take the heat off debt”.

In January the New Zealand Herald reported there had been at least four suicides by farmers in December and said industry experts were blaming high levels of rural debt for increased stress. It said 14 farmers had taken their lives in the second half of last year and some local hospitals were treating a number of farmers at the same time, after attempted suicides.

Prof Roche said there was little doubt New Zealand dairy farmers created a successful business model between 1985 and 2005, and kept their costs of production low because milk prices were low.

“In other words, these statistics indicate that expansion and intensification during the last decade has not returned any value to New Zealand dairy farmers. In fact they are working harder, milking 80 more cows, on average, and receiving no additional financial reward.”

Minister for Agriculture Simon Coveney said he is a big admirer of the country’s dairy farmers. “But I still think there are lessons to be learned. We need to make sure that farmers don’t get themselves into too much debt. And we need to make sure that from a sustainability and environmental management point of view we work with nongovernmental organisations,” he said.

“I don’t think New Zealand did that particularly well and as a result there is friction among some NGOs and farming bodies in New Zealand.”

The number of cows

milked almost doubled over a 20-year period, which led to increased pollution problems with waste and nitrogen from fertiliser running into waterways. Friction is a mild word to describe the differences that arose between farmers’ groups, the Fish and Game Council and environmentalists.

Mr Coveney said he would do everything to ensure Ireland did not go the same route.

“We need to share the numbers on emissions footprint of our dairy herd and we need to show that essentially we’re applying science, auditing and measurement from an environmental point of view to our production systems. If we are going to grow this industry at the pace we’re planning to grow it we have an obligation to prove that were doing it in a way that’s sustainable,” he said.

Prof Roche said most New Zealand dairy farmers have a very good lifestyle: “The farms are so big that they do have more free cash. The climate is better. The winter is not much more severe than in Ireland but it’s far shorter.”

He said farmers work long hours “but no longer than Irish farmers”.

“Scale-wise, farmers have the opportunity to employ labour which gives them the chance to take weekends off. With scale and efficiency, that will come for Irish farmers too.”

Of course, there is stress for the heavily indebted.

“If you’ve set your business up with high costs, irrespective of whether you have high output or not, when milk price turns down high costs are difficult to roll back,” he said.

“There’s no question about that. If we hadn’t had milk quotas I think we could have matched New Zealand.”

Baby it’s cold inside: 12 ways to deal with draughts
9

Health Hints for the Home: Worms in children
10