My dad swapped us for a stranger. I’ve never recovered

This Father’s Day, I’m reclaiming the missing narrative, papering over the cracks 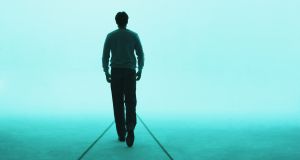 I wished that my dad had died. Grief is unbearable, but being rejected by my wonderful dad seemed worse. Photograph: Getty

I was 14 years old when I had my heart broken for the first time. It was also the day my childhood ended.

A phone call to our house arrived like an earthquake: unforeseen, unwelcome, unimaginable. It shook us to the core, its seismic waves ripping apart my home, my family, my life. The perfect world I had known shattered before my eyes.

All around me lay casualties. My mum, betrayed by an affair; my brothers, shocked that our upstanding father, who despised dishonesty, had been living a lie; and me – a daddy’s girl – broken in two.

I had never seen my mum cry before that day. I had never heard arguing in my house. It was 1987. Affairs happened on TV. In Dallas. Not in this home, where Mum and Dad cuddled, held hands watching TV, and laughed like best friends do. I took it for granted they adored each other. My poor mum thought they did too.

My younger brother and I slept in each other’s arms that night, fearful and confused, refusing to believe the snatches of angry conversation we could hear from downstairs. The unfamiliar tone, the language, the shouting paralysed us, until, exhausted, we fell asleep.

The phone call came a few days before my summer exchange to France. At my mother’s insistence, she and my dad glossed over the drama the next morning, reassuring us all that there had been a terrible misunderstanding and that Mummy and Daddy still loved each other. She wanted me to go to France and enjoy myself.

I had no reason to doubt them: this was not Dallas. I skipped off to Rouen, happy with the new narrative: the lady ringing our house had simply been confused. And then came the aftershock. Three weeks later I returned home to Ireland to find out that my dad was gone.

He had swapped us for a stranger.

Moving to England within weeks, he rang and returned to visit frequently but the sense of abandonment was cataclysmic. At 14 I’d never known pain, or deceit or rejection, yet all three were thrust upon me in a package cruelly gift-wrapped with puberty. The hormones arrived, the anger raged and the wound my dad had visited upon me festered with infection.

I wished that he had died. Grief is unbearable, but being rejected by my wonderful dad seemed worse. If he were dead, I reasoned, I’d still feel anger and sadness, but not betrayal. Knowing he had chosen another life, away from us, was too much pain to process. Death seemed like a lighter cross to bear.

A rejected child is a tragic thing. I began to get in trouble at school, fight with my mum and rage against my splintered life. Dad’s weekly calls inevitably ended in tears. “You’ve no right to parent me!” I yelled down the phone. “You left us and don’t get to tell me what to do.”

By writing himself out of our lives, he was inadvertently writing the script for his three children’s futures. One selfish act had altered our course, bequeathing us foundations flawed with insecurities.

My mother worked hard at piecing life back together, her broken children blind to her own heartache. Despite pain and rejection after 18 years of marriage, she kept her anger to herself for fear of further fraying our fragile relationship with Dad. She rose, phoenix-like, from the embers, strong, compassionate, hopeful.

I didn’t know how to forgive. I wouldn’t for a long time. Dad’s misdemeanour seemed so much larger than my capacity for acceptance, as a child, as a teenager, as a 20-something. I discovered happiness again but each of Dad’s visits left me bewildered – weekend whirlwinds that were followed by hangovers of hurt.

My dad was 10 years old when his father died. The irony of his choices has not been lost on me. A father in absentia, my sense of loss diminished over the years, yet is always there, lingering in the shadows. Tears spilled more than 30 years ago still intrude on my life, springing at unwelcome moments: during a weekend stay with my college friend’s happy parents; hearing my husband sing Puff the Magic Dragon to our daughter; on the eve of my son’s 14th birthday, the age I was when my family broke in two.

Losing a father meant losing a lifetime of unmade memories, of untaken photographs, of unspent family time. Of Christmas dinners, first discos, new boyfriends, driving lessons, exam results, graduation day, meeting newborn grandchildren in hospital. There were calls and cards and visits, but, mostly, he was present by his absence.

Dad turns 80 this year, a youthful man in perfect health, remarried and content in England. We talk often, laughing and sharing tales of the happy home I have made. He chats to my children and sends birthday gifts. But we don’t truly know each other. I don’t know his proudest achievement, his first memory of me, his biggest fears. I don’t know what newspaper he likes to read or what his favourite subject was at school.

Decades of dad-daughter chats we never shared across dinner tables risk being lost to time. And so, this Father’s Day, I’m reclaiming the missing narrative, papering over the cracks.

I’m gifting my dad a book – Dad, Tell Me, by Elma van Vliet– a give-and-get-back journal, that will outlive both of us. It will ask him to reminisce on paper and fill in sections about his life, taking me down a memory lane I should have strolled by his side. I am seeking missing fragments of a lost childhood. I am seeking comfort-giving nostalgia. I am seeking closure.

Four wines that capture the last drop of summer
7