Tesla test drive: acceleration feels like being shoved down a lift shaft 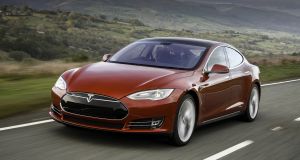 So much has been written and spoken about the Model S since it was first introduced that it seems to have been around for most of forever, but here at last is our first chance to drive the car for an extended time on Irish roads 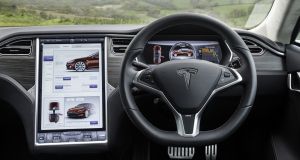 There’s an argument that we do need to re-set our expectations with Tesla. This is, after all, a car maker which can fix most problems over a 3G connection, and which offers the same four-year, 80,000km warranty on its used cars as on its new ones

If it arrived as a script rather than a press release, you would describe it all as one of the great super-villain plots.

A self-made billionaire decides to enchant the world with eco-friendly motoring while simultaneously developing massive rockets to carry humanity to Mars.

At some point, you would assume that the one plan with merge with the other, and much evil cackling would ensue, stopped only by the intervention of James Bond or Captain America, but thankfully thus far Elon Musk - the man behind both Tesla Motors and SpaceX - seems genuinely intent on green motoring and space exploration for the mutual benefit of mankind, his bank balance and his personal enjoyment.

Ireland had long been on Tesla’s seemingly-endless to-do list, and we’ve heard so much from so many about how perfect Ireland is for electric cars (largely flat, largely mild, largely small). The final, eventual arrival of Model S and Model X cars here this week, and the opening of two crucial premises finally conjoined the most promising electric car maker with the, allegedly, most promising electric island. Both the first Irish Tesla Store (in Sandyford, south Dublin) and the first Tesla Supercharger charging point (just off junction three of the M8 motorway) opened for business this week.

So much has been written and spoken about the Model S since it was first introduced that it seems to have been around for most of forever, but here at last is our first chance to drive the car for an extended time on Irish roads. Tesla was brave enough to entrust us with guiding the car not only through the barracuda shoals of south Dublin traffic, but also deep into the Wicklow mountains, home to roads that have unstitched the chassis of many a supposedly brilliant car.

Let’s get the headline-grabbing stuff out of the way with - yes, Ludicrous Mode is just that, and it is brain-meltingly fast. Named for a gag in cult Mel Brooks Star Wars ripoff Spaceballs, Ludicrous Mode in our range-topping P100D Model S test car unleashes performance which requires a Porsche 911 Turbo S to keep pace with.

A 2.7 seconds 0-100kmh time, thanks to the near-as-dammit 1,000Nm of torque developed at precisely one rpm by the twin electric motors that give the Model S its four-wheel drive. Initial acceleration feels like being shoved down a long lift shaft, and the P100D can do it again and again without seeming to damage its estimated range too badly.

Ah yes, range. This is the Tesla’s real party trick, so forget about the acceleration. Quotes ranges vary, according to Tesla, from model to model and depending on expected use, but on an average rating, the least you should expect to see from a full battery is 450km.

Our P100D, with its big battery stack built into the floor of the car can go for around 570km, while a 100D might break the 600km barrier in regular use and the official NEDC figures are even higher, albeit acknowledged as a useful fiction. Range anxiety has simply been eliminated, and the expected expansion of the Supercharger network (Tesla won’t say precisely how many it’s going to build, but says that these fast-chargers will serve all the major motorway routes, plus a few others) will diminish that fear even further.

Tesla will also sell you, for around €1,000 including fitting, a 7kWh home charging point which can top up a P100D, from flat, overnight. You’ll need an adaptor (roughly €400) to use the chunky CHADEMO fast-chargers already in place in Ireland, though.

On the run down to Macreddin in Co Wicklow, we used around 15-20 per cent of the battery’s charge, and then topped up at a ‘medium-speed’ Tesla Destination Charger installed at the Brooklodge Hotel - a thoroughly pleasant way to while away a coffee stop while the battery topped back up to around 85 per cent.

On the way along Wicklow’s winding and broken roads, though, the Model S started to reveal its shortcomings.

This is a car which, in terms of price, size and luxury, competes with the likes of the BMW 7 Series and Mercedes-Benz S-Class, but it cannot match either for dynamic performance.

Perhaps it would be a bit much to expect that of a car maker barely 15-years old, creating an electric car from a blank sheet of paper, to be that good, but the steering and the responses from the air suspension were nothing better than fine. For a minimum of €83,581 (and a list price of €169,936 for our P100D), one might expect rather better than fine.

That’s true of the interior too. The enormous central screen dwarfs that of any other car and is super-slick and actually quite intuitive to use. At first, you think it’s going to be a distracting, confusing nightmare but the design and layout are actually very easy to fiddle with and it doesn’t take long to swish and flick around with ease.

The materials used - a mixture of wipe-clean white faux-leather (a vegan option is available, honestly), carbon-fibre and Alcantara suede all looked good and mostly felt good, but some panels and sections are still noticeably cheap, and we detected two distinct and irritating rattles. True, you hear those more in a car with no audible engine, but again, we point to the expectations engendered by the price tag. Flappy, noisy windscreen wipers too.

Such things were more noticeable still in a spin in the Model X SUV. With its roomy cabin (available in five, six and seven-seat layouts) and those incredible ‘Falcon’ rear doors (which are more Star Trek than lunch at William Shatner’s house) the X is expected to be at least as popular as the S, and that would be hardly surprising. But it too rattled on the inside, shared some of the slightly poor cabin finish and didn’t feel half so well-sorted in either chassis and steering as did the Model S.

Then again, there’s an argument that we do need to re-set our expectations with Tesla. This is, after all, a car maker which can fix most problems over a 3G connection, and which offers the same four-year, 80,000km warranty on its used cars as on its new ones (so few moving parts, you see, and the batteries are guaranteed for up to eight years and unlimited miles).

A car company which, quite openly, allows its customers to act as ad-hoc test drivers for new systems and which is already shipping cars with the hardware (if not the software nor unlock codes) for fully autonomous driving. A car company that makes a five-seat (seven seats optional) luxury saloon that can out-punch Porsche’s most ferocious 911.

In that sense, it’s hard to know quite how to rate the Model S. It has no direct competitor yet, and realistically won’t until Porsche releases is upcoming Mission E saloon. It’s as futuristic as cars get, yet uses old-model Mercedes switches and has less than perfectly comfortable seats. It can accelerate like no other production car this side of a Bugatti Chiron, yet only handles about as well as a last-generation Audi A8. It’s maddening and wonderful in pretty much equal measure. It isn’t the future, as given the current rate of Tesla’s development and evolution, the future is likely to be much, much better again, but it’s unquestionably the present in its most bleeding-edge form, and an exceptionally exciting car.

Verdict: In many ways, mind-bendingly brilliant. In some ways, maddeningly frustrating.