Tesla comes to Ireland . . . for a visit 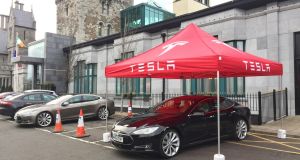 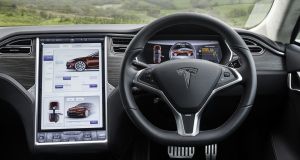 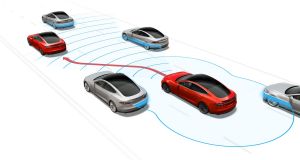 A graphic of Tesla’s autopilot tech

Dublin car fans may have been surprised by the sudden surge in Tesla sales of late, if they were to judge by the number on the roads of the leafy lanes of Clontarf.

Sadly it was but a blip in the normal motoring routine of the sea-facing suburb, as the electric car firm’s UK operation held several “awareness events” for potential customers. The focus of attention was on the Tesla Model S, but much of the talk was of the upcoming models set to rapidly expand the firm’s offering – and customer base.

The firm’s definite “no” to selling its cars directly into the Irish market has mellowed slightly. For now, if you want a Tesla in Ireland you will have to buy it in the UK, in sterling, import it privately and pay the appropriate VAT and VRT.

Tesla still has no plans to open up shop here, but the fact it has brought over its UK demo fleet is a positive sign. There are also strong indications that four Tesla “Supercharge” stations are being planned for the four main cities on the island.

These supercharges can deliver half a full charge, potentially 265km, in just 20 minutes. Tesla stressed to us that all sales are done by Tesla – there are no third party importers in its business model.

Tesla sells its cars via its 13 stores in Britain. One recent store opened last December on Oxford Street in London. Each store has a car, some technical displays and lots of interactive screens. Buyers can also go online to purchase their car: buying a Tesla is more like shopping for a piece of tech than an oily chunk of metal.

The Model S is a stylish five-seater but thanks to its clever floor plan it can be configured to accommodate up to seven people with two rearward-facing child seats in the boot area.

Technology and electronic gadgetry is at the fore with the Model S. While owners sleep, upgrades happen via the owner’s home internet connection. In the morning owners can see what has been installed overnight and can decide to use any new options. The most recent upgrade is called 7.1.1, which means more tech-obsessed owners say they have a Tesla S 7.1.1 (just like descriptive computer jargon). The latest update enabled the “Summon” feature.

This allows owners via the Tesla smartphone app to summon the car from outside the vehicle. We’ve seen variants of this technology on BMW’s new 7 Series and Mercedes-Benz’s new E Class recently too.

One piece of optional driver assistance we tried was “Auto Pilot” (£2,600). This system combines the car’s adaptive cruise control with automatic steering and lane-changing ability to allow the car to drive itself. To engage Auto Pilot you pull the Mercedes-Benz -sourced cruise control stalk towards the steering wheel to set the speed, a twist of the stalk enables you to set the distance maintained to the car in front also. Two further pulls in succession will activate the autonomous steering function.

As the road bends the car will follow in its lane while you do. . . nothing. A small blue steering wheel lights up on the dash when the system is working. Auto Pilot uses a front windscreen mounted camera system to identify the lane markings and 12 sensors around the car to inform it of any surrounding traffic, plus there is rear radar.

If you use the indicator the car will change lane, but unlike the Mercedes-Benz system we’ve recently tested you must hold the steering wheel in the Tesla (the steering wheel contains touch sensors). This all sounds great and it works too, but the potential for misuse is massive.

Tesla says its Auto Pilot function is an assistance system and the Auto Steering element is still in beta trial format. Tesla only recommends its use on motorways – even activation on a motorway merging road is not recommended. Auto Pilot can be disabled in a settings menu on the wonderfully large centre console touchscreen. Mercedes-Benz’s optional Auto Pilot system is on sale in the new E Class with no such restrictions and is not in beta form.

At the end of March, Tesla will announce pricing and start taking reservations for its new budget “Model 3” while delivery to customers of the Tesla X (SUV) are due in the second half of this year. Tesla S with its serious performance and massive 530km range makes it easy to understand why Elon Musk’s automotive business has grown a cult-like following.