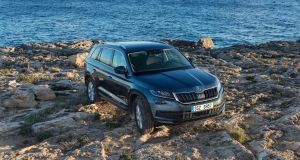 We knew as soon as it was announced that Skoda’s Kodiaq would shake up the exploding SUV market like few others. The combination of the must-have body shape, the appeal of the Skoda brand and the option of seven seats pretty much assured that from the get-go. The fact that it will dramatically undercut more or less all its major opponents on price will underline that fact.

With prices starting from €28,795 for a 1.4 TSI petrol front-wheel drive model, making it cheaper than the mechanically-identical but smaller Volkswagen Tiguan. The Skoda also has more interior space and, in basic five-seat form, a much bigger boot (although there is a larger, longer-wheelbase seven-seat Tiguan due soon).

The only comparable model which comes close to matching the Kodiaq is the Nissan X-Trail, which in basic five-seat form has prices starting from €29,995 for a 1.6 diesel model. The cheapest diesel Skoda costs €35,495 but comes with an automatic gearbox as standard.

Speaking at an event marking the announcement of the prices, PR manager at Skoda Ireland Cathal Kealey said, “We have seen unprecedented interest in the new Kodiaq and with the competitive prices and impressive specification announced today we are confident that customers won’t be disappointed.”

It should be noted that there’s a €600 delivery charge on top of those prices.