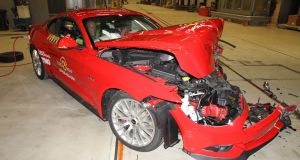 The poor result has led NCAP to criticise Ford for preparing the Mustang only to American safety levels, not supposedly stricter European ones.

Ford’s Mustang has just notched up the worst score from the Euro NCAP crash test since the Lancia Ypsilon scored two stars for crash protection in 2015.

The Mustang’s performance came in for some heavy criticism from the NCAP experts, most especially for poor whiplash performance and for the fact that one of the rear-seat occupant dummies “submarined” out under their seatbelt in the frontal impact. The poor result has led NCAP to criticise Ford for preparing the Mustang only to American safety levels, not supposedly stricter European ones.

“Ford did not expect Euro NCAP to test the Mustang, and chose not to fit safety technology in Europe, which is available to its American consumers, and available on several other sports cars for that matter. Such an attitude to safety should trouble Ford’s customers, whether they are buying a high-powered muscle car, or a regular family car,” said Euro NCAP’s secretary general, Michiel van Ratingen.

While Ford has said that the updated Mustang, due later this year, will feature upgraded safety tech including an autonomous emergency braking system, Ratingen said that such add-on electronic systems may not be enough to improve the car’s rating.

In response to the criticisms, a Ford spokesperson said that “we are disappointed by the Ford Mustang Euro NCAP rating”, pointing out that the forthcoming facelifted Mustang – available from September and due for first deliveries in early 2018 – will feature Pre-Collision Assist and Autonomous Emergency Braking amongst other new safety measures.

“We still believe the current Mustang is a safe vehicle.”

The test has opened up fresh debate about competing global safety standards, and the potential for confusion among consumers about which car is safe and which isn’t. NCAP has come in for criticism in the past for being too limited and specific in its testing, and for effectively encouraging car-makers to design safety systems around laboratory-based tests, rather than real-world conditions.

It should be noted that the Mustang has passed the gruelling Insurance Institute for Highway Safety (IIHS) crash tests in the US, with either a Good or Satisfactory rating in all areas. Notably, the IIHS tests for a head-on collision with another vehicle, while the NCAP front impact test is carried out against an offset deformable barrier.

The issue of differing safety standards was raised by Global NCAP last year when it crash-tested the Datsun Go, a Nissan-designed small car intended for so-called “emerging” car markets such as India. To put it mildly, the car performed poorly, folding up and deforming the passenger compartment in a way quite shocking to those of us used to European-spec cars sailing through the tough Euro NCAP test with four or five-star scores. So bad was the Go’s result that Global NCAP took the unusual decision to call on Nissan to take the car off sale.

It’s the whole concept that car-makers can apply different standards of safety to different markets that has Global NCAP up in arms. Protection of human life, it argues, should not be relegated to the options list merely because of the need for lower prices.

“Safety improvements stimulated by legislation and consumer awareness campaigns in high-income economies that have saved hundreds of thousands of lives are not yet systematically available for drivers and their families in rapidly growing lower-income markets,” said Max Mosley, chairman of Global NCAP.

“For example, crash test standards introduced 20 years ago for cars sold in Europe are yet to be met by many new cars, and even brand new models being sold today in leading middle-income countries in Africa, Asia, and Latin America. This is entirely unacceptable. Manufacturers cannot continue to treat millions of their customers as second-class citizens when it comes to life-saving standards of occupant protection.”

Indeed, Ireland is an interesting test case for the incentivising of safety options. A decade and a half ago, Irish car-makers told us that the take-up of optional anti-lock braking systems was far, far behind that for sunroofs or alloy wheels – Irish customers like to see where their money is going, rather than spending it on safety items that may or may not ever be deployed.

David Ward, Global NCAP secretary general and author of its new policy document, said: “The drive for the democratisation of car safety must now be extended across all automotive markets worldwide. By 2020 at the latest we want all new cars to meet basic standards for both crash protection and crash avoidance. They must have crumple zones, airbags, and electronic stability control. Our new report sets out 10 clear recommendations to transform global car safety as well as a realistic and affordable timetable for their implementation.

Back to school: We went into a tailspin when our eldest had a temperature
Real news has value SUBSCRIBE