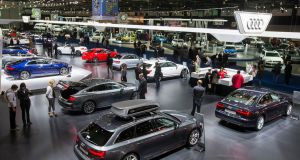 The Audi showroom at the Brussels Motor Show in Belgium, which ran from from January 14th-22nd. Photograph: Stephanie Lecocq/EPA

As many as 59 per cent of the globe’s top car company executives believe that half of current car owners do not want to buy another car and that the defining technology of the future of motoring is not battery electric cars but those fuelled by hydrogen.

These are just two of the more striking findings of a report commissioned by KPMG which has asked the senior staff of car-makers around the world exactly where they think the industry is heading. That heading seems to be towards hydrogen power, car-sharing and digital platforms making more money than products made from steel and aluminium.

It is the 18th year that KPMG has run its Automotive Executive Survey. This year almost 1,000 respondents were canvassed for their opinions. The survey includes car-makers, suppliers, dealers, financial services providers, rental companies, mobility services providers and companies from the information and communication technology sectors.

Dieter Becker, KPMG’s global chair of automotive studies, said the car companies were heading into “a very diverse powertrain technology landscape, ever stricter regulations, changing customer behaviour and the increasing demand for connectivity and digitalisation.These two fundamentally different worlds are heading towards each other at ever increasing speed and so it may seem that they will converge completely one day.

“However, to us the clash of cultures between the offline and the online world is insurmountable and we believe that they will never become fully congruent. This means that we need to let go of the vision of a complete auto-digital fusion,” Mr Becker added. “We instead believe in an additional overarching layer, a layer so to speak of the ‘next’ dimension in which both worlds are to some extent represented, a dimension characterised by co-integration in which the roles in the value chain have not yet been decided.

“For traditional auto companies, the key question will therefore be which role to strive for and how to tap new future revenue streams when traditional streams break away.”

At the moment, half of those asked said that battery electric vehicles were the top key trend in the industry now, a belief which has jumped from ninth in the list just two years ago. Just one percentage point behind are those who believe that connectivity and digitisation make up the most important trend. However, it is the belief that, for the future, hydrogen fuel-cell vehicles are more significant than battery-electric vehicles that is possibly the most surprising.

Certainly, many more car-makers are currently pushing hard to bring battery cars to market, battery cars with sufficient one-charge range to make them relevant to an ever-growing number of buyers, so the belief that one day hydrogen power may overtake batteries is somewhat odd, to say the least.Sixty-two per cent believe that the electric car revolution will flounder because of long charge times, short ranges and infrastructural gaps.

KPMG believes this may be down to the fact that car company execs see their world caught in a “lost in translation” gap between the old metal-and-fuel world and the new digital world and do not like what they are seeing. With the growth of car-sharing and ride-sharing, and the need for vast investment in national infrastructure to bring mass electric car driving to fruition, car-makers seem to be clinging to hydrogen fuel cells as a simpler way of making a car and then selling it to a customer who goes away and fuels it themselves.

“Execs are hesitant regarding co-operation and unsolved infrastructure challenges,” the report says. “The reason for execs to believe in fuel cells may be their strong attachment to the existing infrastructure and traditional vehicle applications.”

Essentially, it is the gap between the traditional car-making model (as best espoused right now by Toyota which has its hydrogen fuel cell Mirai already on sale) and Tesla, which makes and sells its own cars directly and which invests in its own network of Supercharger stations.

“Executives are torn between traditional combustion engines, which will be technologically relevant but socially unacceptable,” says KPMG’s Laurent des Places, its automotive leader for France. Significantly, though, more than half of all executives believe that diesel power is, effectively, dead and is fast becoming socially unacceptable all by itself.

In what is potentially the biggest shift in car-making, though, motor industry executives are in broad agreement that the rise of autonomous technology will change forever people’s reasons for buying (or indeed not buying) a car.

Two-thirds of executives believe that what make people buy cars today (performance, either in an ecological or sporting sense, comfort) will be made irrelevant when cars can drive themselves, at which point criteria such as the ability to relax and socialise or work while on the move will become prominent.

Fifty-nine per cent of execs believe that by 2025, half of all of today’s car owners will no longer want to buy a physical car and will instead use car-sharing or ride-sharing. Interestingly, only one-third of consumers, also polled by KPMG, agreed, with 37 per cent either disagreeing or “absolutely disagreeing”.

As far as whom one can trust with developing such autonomous technology through to a level of being “zero error”, the car companies, perhaps unsurprisingly, trust themselves the most – 49 per cent of executives say that a premium car-maker (such as BMW or Mercedes) can be best trusted with making robot cars, while 37 per cent say a mainstream maker, such as Nissan or Ford, is best placed.

No car-maker picked an intrusive Silicon Valley entrant, such as Tesla or Google, but 25 per cent of consumers did, saying that such start-up firms (in a car-making sense) will be the most trusted at making self-driving cars.

Among other findings, including an industry belief that as few as 5 per cent of cars will be made in western Europe by 2030, the belief in prospects for success make the most interesting reading. BMW is rated as being the most likely to either increase its sales or profits or to at least remain stable.

Toyota is in second place, with Daimler-Benz, Honda and Hyundai rounding out the top five. Volkswagen, in the wake of Dieselgate, slips to sixth place, followed by Ford in seventh and, somewhat surprisingly, Tesla in eighth, beating out more traditional players such as General Motors and Renault Nissan.

Far Eastern car-makers prop up the table with China’s Chery Group in 20th place and BYD Auto in 19th. The lowest-placed European car-maker is Fiat-Chrylser, languishing in 16th place, followed by Geely Group (a Chinese car-maker, but it owns Volvo) in 17th. It is worth pointing out that all of these mentioned car-makers are expected to grow or at least remain stable, with only small percentages suggesting that they will contract.

Great British Bake Off: How they got around social distancing in the tent
4

Let’s go outside: The why, how and where of getting outdoors, whatever the weather
9