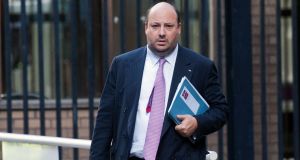 Jailed fraudster Achilleas Kallakis: was involved with numbers seven and eight St James’s Square, London, which have been sold for £245.9m by Irish developer Green Property

AIB is likely to share in any proceeds from Green Property’s €290 million sale of a London mansion and an office building once linked to jailed fraudster Achilleas Kallakis.

The Irish developer said on Monday that it has sold numbers seven and eight St James’s Square, London for a combined £245.9 million sterling (€289 million). The price paid for number eight valued the building at a record £3,425 per square foot, the company added.

The sale is likely to benefit AIB, which sold the buildings to Green in 2008 as part of an €815 million portfolio made up of properties accumulated by Kallakis, whom the British courts subsequently sentenced to 11 years for conspiracy to defraud.

AIB, which is 90 per cent-owned by the State, loaned the money to buy the portfolio to Green at preferential interest and took a €73 million loss on the sale.

As part of that transaction, it is believed that the bank kept an interest in the properties entitling it to benefit from any increase in their value. Neither the bank nor Green commented on this yesterday.

Greek businessman Kallakis duped AIB and Bank of Scotland into loaning him £769 million to buy trophy properties in London as well as private planes and yachts. The Irish bank contributed £740 million of the total.

Number seven is a listed mansion designed by architect Edwin Lutyens, best-known for his work on the Irish war memorial at Islandbridge and Tranarossan House in Co Donegal.

Over recent years the company added a courtyard garden, parking space and scope for a swimming pool to the building.

Green director Mike Tipp said the sale highlighted the resilience of prime London properties: “It is a reflection of the ongoing attractiveness of the west end as a target market for long-term international capital.”

The developer has sold a number of other Kallakis-linked properties in recent years. In 2014, it disposed of the offices of Daily Telegraph publisher Telegraph Media on Buckingham Palace Road to Kennedy Wilson for €265 million.

In June 2013, it earned €105 million from the sale of One Nine Elms, a central London site earmarked for homes, offices and shops, to Dalian Wanda Group, China’s biggest commercial property and entertainment conglomerate.

Green got planning permission for the scheme from the London borough of Wandsworth.