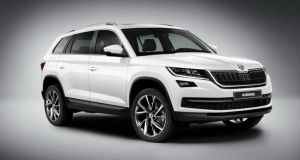 Skoda’s new Kodiaq SUV: this seven-seater could push the brand up against some long established premium players in the SUV ranks 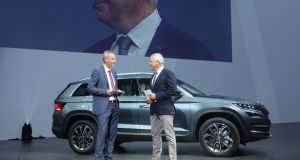 The race to increase the number of quasi-SUVs on our roads continues apace, with Skoda now joining the fray with its new Kodiaq seven-seater.

The impressive-looking SUV fills a gap in the Skoda range at a time when buyers are moving away from saloons towards this format. For a firm that looks to its Octavia and Superb for volume sales, they need to be active here or risk losing customers to rivals.

In size, the Kodiaq competes with the likes of the Hyundai Santa Fe and the Kia Sorento, but it is also going to be a de facto rival to the likes of the Land Rover Discovery Sport, the Audi Q5 and the BMW X3.

It will be Skoda’s first truly premium style product since before the second World War, in all but name at any rate.

High-tech options will include birds-eye-view parking cameras and the VW Group’s trailer assist system that gives you guidance when reversing with a towed load.

Engines will mostly be the familiar 150hp and 190hp 2.0-litre TDI but there will be petrol options and, eventually, a plug-in hybrid using the VW GTE setup, likely arriving in 2019.

Two petrol engines will also be on offer, with the 1.4-litre likely to arrive in Ireland as the entry-level variant. The Kodiaq will come in front-wheel drive or four-wheel drive and with six-speed manual or seven-speed dual-clutch DSG automatic transmission.

Style-wise, it’s a step forward, taking the sharp-edged look of the Superb saloon and estate and stripping it back to create a minimalist effect that relies on its sheer size, and that big grille, to get you to notice it.

Skoda chief executive Bernhard Maier said he expected volumes to match, if not exceed, those of the Superb and while executives were reticent about profit margins, it is believed the Kodiaq will be one of the firm’s most profitable models in the coming years.

This is only the start of a major SUV model offensive. Expect a smaller crossover variant to replace the current Rapid in the future, along with another coupé-styled iteration.