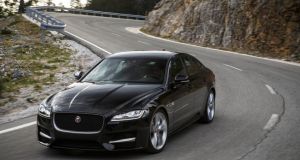 Familiar face: the new XF looks quite similar to the first-gen model but 83 per cent of the its components are unique to the car 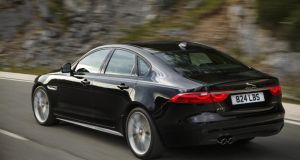 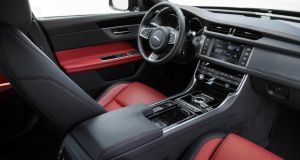 As I turned in for the slow right hander, using the gearshift paddles to urgently slam down through the eight available ratios, I overcooked it all – took too much kerb at too high a speed with too much steering lock on. With a sickening lurch, the Jaguar XF flicked both inside wheels into the air, launched off the tip of the high red and white race track kerbing. There was a brief pause, a chance for hope to seep back in for a second, before physics played out its inevitable end game and we rolled over on to the roof, scraping along the track surface before gently rotating to a halt. “Bugger. . .” was the best I could offer.

Thankfully, this didn’t require a flurry of track marshalls, nor a fire brigade with cutting equipment, nor the presence of the St John ambulance. It was a computer simulation, and so all it required was a punch of the reset button, and suddenly all was right way up and I was off again, around the technical and deceptive Navarra race track in northern Spain.

So, what did we learn here? That I’m rubbish at video games? I could have told you that before we even got started. That the Navarra track is harder than it first looks, basking innocently in Basque sunshine? That’s definitely right. That Jaguar’s new XF saloon is harder to handle than it looks? That may just be the result of a fervent video game makers’ imagination . . .

I’ll have to say new XF a lot here as you’ll be forgiven for thinking that it’s actually the old one. Jaguar, under its chief designer Ian Callum, has been very conservative with the styling of its second generation XF. The first-gen model, launched in late 2007, was essentially the car that saved Jaguar, that cut the umbilical cord to pointlessly retro 1960s styling and which provided a bridge between ownership by Ford and ownership by Indian mega-conglomerate Tata. Some 280,000-odd sales later, we’re here and the message is: “Steady as she goes”.

There are sound reasons for this, as Callum explained. “When people see this we want them to say, ‘Oh look, there’s a Jag.’ Not necessarily an XF or anything else, but a Jag, so a strong family resemblance was crucial. It’s easy to have a Eurocentric view where you assume people know what a Jaguar is and what one should look like, but that’s not the case. Even in the US, where I get to drive around in XJs a lot, people still don’t necessarily know what a Jaguar is.

“We’re a small car company, and still building our global presence, and that’s what this is a big part of.”

Unsaid in the background is the undeniable fact that BMW and Audi have launched to global success by cookie-cutting their way to identikit model ranges, where different cars all look basically the same. Why should we expect anything different of Jaguar?

The familiar looks ride atop a tide of change though. Finally, out goes the dated steel chassis that underpinned the old XF (and which dated way back to the 1998 S-Type) and in comes an aluminium-intensive chassis which closely mimics the smaller XE and forthcoming F-Pace crossover. Mimics but doesn’t slavishly copy. Eighty-three per cent of the XF’s components are unique to the car, says Jaguar. It is definitely lighter (by about 190kg model-for-model) and much stiffer, providing a much more promising platform for the XF. In spite of looks that are still lithe and sleek, it is roomier inside thanks to a 51mm increase in the wheelbase. The boot is a practical 540-litres and there’s an extra window built into the side profile to allow in more light.

That interior plays a similar trick to the exterior: it will look more or less familiar to anyone who’s driven an outgoing XF (same overall architecture, same speedboat-like sweep running from the doors behind the dash, same rotary gear selector for the automatic gearbox) but it’s actually very different.

The standard analogue dials are much clearer and classier for a start, while the (also standard) 8-inch touch screen now features Jaguar’s much- improved InControl Touch infotainment and navigation system.

Optionally available is an even more impressive 10.2-inch InControl Touch Pro system which features slider graphics, more functions (including remote engine start and stop via your smartphone) and the disappearance of the fixed plastic buttons at the side of the screen. It’s at least six months away from production though, and possibly further away again for Ireland as Jaguar is still trying to find a reliable mobile signal partner to handle the system’s 3G/4G connectivity.

As with the smaller XE, three diesel engines are available – a new 2.0-litre “Ingenium” four-cylinder with either 163hp or 180hp and a larger 3.0-litre V6 diesel with 300hp. There is also a special-order S model featuring the supercharged V6 petrol engine from the F-Type sports car, with either 340hp or 380hp. That was the version we got to drive on the track (both in virtual and in reality) but it will be of only the faintest minority interest in Ireland.

The good news is that the 180hp diesel is generally excellent. As with the smaller XE, it’s a little noisier than you’d ideally like at low speeds (although overall it’s much quieter in the XF than in the XE) and it does get a bit breathless over 3,500rpm. That aside, it has a muscular 430Nm of torque and should be decently economical too. It’s also closed the gap to BMW and Audi in the CO2 stakes, thanks to being as much as 70kg lighter, and it records, in 163hp guise, a 104g/km CO2 figure.

It’s also utterly lovely to drive. Jaguar has for many years now had a magic touch when it comes to suspension and steering, and the XF shows it hasn’t lost its way. The steering in particular is beautifully sensitive and feeds back a constant and useful patter of information about the road surface to your palms and fingertips. Our R-Sport test car was riding on the Sports-spec suspension, without the active damper control, and was a paragon of refinement and control. It rides with remarkable softness for such an overtly sporting car, yet remains flat, fast and accurate in corners.

Even on the track, where it refused to overheat its brakes or wilt under pressure, the XF felt immensely capable, friendly and entertaining.

Will any of that be good enough to break the German stranglehold on the premium executive market? That perhaps is more doubtful, but Jaguar has created for itself a car of exceptional talents. Prices will cleave closely to the outgoing model, which is good but comes with a caveat – the old XF was automatic-only. The new one, as with its German rivals, comes as standard as a manual and will charge you extra for an eight-speed automatic. Which means its effective price (as no one actually buys a manual in this class) will be a couple of grand higher.

Perhaps though, that’s a price worth paying for a car that’s actually better to drive than its own computer simulation.

Let’s go outside: The why, how and where of getting outdoors, whatever the weather
5