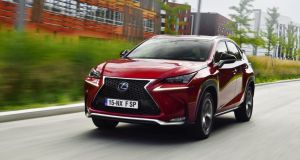 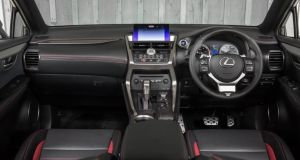 Lexus sales staff must have shed a few tears of joy at the sight of shining new NXs in the showrooms. It’s a much-needed new model to a range struggling to keep up with the slicing and dicing of the premium market.

Along with a limited model range the Japanese brand has adopted a seemingly fundamentalist approach to petrol hybrid powertrains at a time when Irish buyers were equally fundamentalist in their devotion to diesel.

The result was that sales bounced along between 200 and 400 cars annually for the last six years. Sales figures at German rivals BMW and Audi over the same period ranged from 2,500 to over 4,000.

Admittedly, the Lexus powertrain strategy has been devised in Japan, where the demands of Irish market – or even the European market – are outweighed by the petrol preference of US and Asian markets and where the petrol-electric hybrid format offers a strong unique selling point for the brand when pitched against petrol-only premium rivals.

In terms of model range it’s worth comparing Lexus to BMW. The Bavarian offers seven different models under its X range, two models under its new i range; one sports car and seven distinct saloon, coupe and hatchback models. Within each is a multitude of powertrain options.

In comparison, Lexus offers six models in Ireland, along with its limited edition supercar, the LFA. There are no diesels in its current range. You can see why the NX is so badly needed.

The premium car brand’s customer base has been desperate for new models in the range, particularly a mid-range crossover as an alternative to the larger – and more expensive – RX. We have been contacted by multiple RX owners eager to find out whether the NX measures up as they are keen to change and also to cut their motoring costs.

So what does it have to offer? First off, there is the styling. In the F-Sport specification of our test car, it comes with the bold distinctive grille which features in most of the ad campaigns. That makes it something of a marmite model – you’ll either love it or hate it.

Given the small number of Lexus cars on the road, it’s important to be noticed and in that regard the NX F-Sport hits the right note. However, for more conservative tastes the other variants of the NX – Eco, S-Design, Dynamic, Premium and Executive specifications – come with a more traditional front grille, arguably a safer bet in terms of resale.

Even then its look is certainly not mundane, with multiple creases and sharp lines adorning most body panels giving it a lot more character and appeal than its boxy and conservative rivals.

Inside, the NX has opted to create a more cosseted cabin feel for the front seat occupants. It certainly feels premium and it’s similar in a way to what you get with the Range Rover Evoque, with its high central console. In the age of touchscreen – and at a time when car firms are showcasing gesture sensing technology at this month’s Consumer Electronics Show in Las Vegas – the NX features a rather cluttered spread of buttons and controls. Admittedly, you can opt for the firm’s premium navigation pack that gives you its latest touch control pad.

Up front, there is a proper air of a premium cabin with comfortable seating, while rear seat legroom is able to cope with adult passengers, while the boot is deep – with a nice deep storage well under the regular floor – but it’s not very long.

Of course, the NX is a petrol-hybrid, powered by a mix of a 2.5 litre four-cylinder petrol engine and an electric motor and battery pack. Total output is 197bhp and Lexus claims it will manage an impressive 5L/100km or 56.5mpg in old money, with emissions of just 116g/km. That’s lower than most of the similarly-powered diesel rivals. In performance terms, it manages to get to 100km/h from a standing start in 9.3 seconds.

The powertrain, on paper at least, packs a proper punch. Yet it is let down by a CVT automatic transmission that seems positively resistant to making the most of the energy on tap. Kick down and there’s an annoying amount of high-revving noise entering the cabin. It’s the weak link in the NX offering, but also an issue we have encountered in other smaller Lexus hybrid models.

We can only surmise that the smaller cars are so focussed on lowering consumption that the transmissions are programmed to prioritise economy above all else. It’s certainly not down to a lack of engineering ability, for the larger GS saloon hybrids have long been hardcore hair-raising performers in terms of pace. Lexus executives take issue with road tests that highlight the seemingly lacklustre performance of its hybrid powertrains, claiming its customers don’t look for racetrack traits but rather easy-going, comfortable and premium transport in a hectic world.

Admittedly, I can sympathise with their point of view but too often at traffic lights or on motorways you do need to hit the throttle a little harder than you do in traffic and you want to get a reassuring surge of power, not a noisy whine.

Frankly, the whining noise from the engine compartment when you kick down really dents the overall impression of a premium quality crossover and the firm needs to either work harder on this transmission or on increasing the soundproofing of the engine bay.

In terms of driving dynamics, Lexus mainstream models remain more focused on comfort and ease of use than engagement. They are simply not as engaging as either their German rivals or similar models from Range Rover or Volvo. The car does lurch in corners if you enter them too fast. It’s a relaxing drive but I can’t imagine anyone making taking a trip in the NX their weekend highlight.

While six versions of the NX starts with its Eco specification version at €43,950, the vast majority of Irish sales will be Dynamic or Executive versions, priced at €48,950 and €50,950 respectively.

Most will also be front-wheel drive, with only the Executive offered with a choice of front or all-wheel drive (AWD) for an additional €2,000 on the price. The F-Sport and Premium versions will have AWD as standard. The AWD system works off an additional electric motor powering the rear axle, but it only really kicks in when it senses a loss of grip. Unfortunately, only the AWD versions are capable of towing, so the horsey set will have to opt for the higher-end NX models.

So who will buy? Rivals range from the Audi Q5, BMW X3 and Volvo XC60 through to the much-loved Range Rover Evoque. But it’s likely that many initial buyers may also be found in owners of older RX models seeking to downsize.

The NX should prove a popular hit with Lexus fans if not quite establishing a lead against its rivals. It’s competitively priced and seems to boast the renowned Lexus build quality for which the brand has a well-earned reputation. Potential buyers need to weigh up their priorities: the NX scores well on build quality, fuel economy, price and image but lower on driving dynamics, and that CVT automatic transmission certainly tarnishes its premium appeal.

It’s a welcome addition to the crossover party, if not quite the showstopper some would have hoped for.

Glamp up the garden with these yurts and bell tents
4