While much is still the same, the biggest change is switch to Range Rover diesel engine 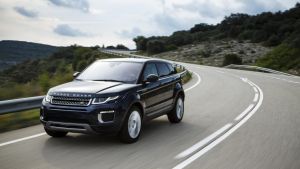 As we nudged forward towards the rocky, sandy precipice, the nose of the Evoque bounced vertically down by about a foot and a loud clanging sound issued from the rear corner.

“Don’t worry,” said the Land Rover Experience instructor with what seemed to me a concerning level of casualness. “It’s just getting a bit worn away there. You’ve only hit it with the bottom of the car.”

At that point it occurred to me that any normal Evoque owner, the type that only drives their fashionable 4x4 trinket around town or across the occasional grassy knoll for school sports day parking, would likely have turned white at the clanging noise. And then passed out on the (sumptuously carpeted) floors.

The Evoque clambered and scrabbled along a twisting, rocky dry gulch. For a car that appears so 100 per cent Gucci on the outside, the Evoque has a core of pure wellington boot. And this was only the two- wheel-drive model . . .

The Evoque we’re all familiar with by now, right? Land Rover’s first ever truly compact Range Rover model, with design input by Victoria Beckham, 450,000 sales around the world since 2010 (1,400 of those in Ireland). It makes up a third of all of Land Rover’s sales.

A huge, shimmering success story. So how do you update a car that’s so successful it sold 125,000 units last year alone? Well, for a start you don’t change its styling much.

I’ll be honest: I predicted five years ago that the Evoque’s slightly fussy, very fashionable styling, would age like bad cheese. I was utterly, dead, couldn’t-be-wronger wrong. It has really stood the test of time, and the proof is that all Land Rover has changed are the lights (slightly), the bumpers (slightly) and the grille (slightly). The overall stance and styling are the same. It remains an uncommonly handsome car.

Inside are equally few changes. There is a nice new instrument pack with a hi-def central screen and main analogue dials that look rather more handsome than before. There is Jaguar Land Rover’s nice new InControl Touch infotainment system (albeit it wasn’t fitted to our preproduction test cars, an error by all accounts) and some updated trim and finishes.

It still looks a bit too plain to my eyes – not unattractive, but perhaps a bit too minimalist in the face of competition from Audi’s Q5 and Mercedes’s excellent new GLC. Still, it’s hugely comfy and always seems to have rather more space than you expect from looking at it.

Not so here: Land Rover has changed a good deal – some 20 per cent of the engine’s components, in fact – to install it sideways across the nose and make it conform to LR’s needs for water wading and much else. The engineers have also made it quiet. Really quiet.

In fact, the 150hp version gets close to the benchmark Volvo D3 engine for overall refinement, and the 180hp is just a fraction more noisy. It’s an impressive performance.

The front-drive 150hp also has impressive emissions: 113g/km for the five-door. (The fractional lighter three-door coupe does 109g/km, but few will be among the 300-odd expected Evoque sales in Ireland next year.) Combined fuel economy is claimed to be 68mpg, but we frankly struggled to get above 35mpg in our test drive.

Then again, a good deal of that test drive was done vertically. When on smoother tarmac, it was hard not to give in to the temptation of a really well-balanced chassis. The Evoque has always been fun and engaging to drive, so no change there but it does feel a touch more supple in the ride quality department than before, albeit without the delicate steering feel you get from a Jaguar.

What’s really impressive is how the front-driver can cope with pretty much the same obstacles, controlled only by your clutch and brake balancing skills – and copious instructions from Land Rover people.

The 4WD Evoque makes it look easy. The front-drive one is more fun. Mind you, the 4WD’s extra power and balance tells on the road – it feels distinctly more punchy and agile.

So, half-a-decade on, the Evoque still looks and feels like a sharp competitor to the likes of the Q5 and GLC (and an ever-growing legion of other rivals). In fact, I’d say it only has one problem. With prices being kept the same as the outgoing one, you’ll pay €41,745 for a basic three-door and €42,190 for the basic five-door.

That’s not bad, but a mechanically identical, more spacious and, to my eyes, even better- looking Land Rover Discovery Sport is even more affordable and, for me, the superior car.

Perhaps the Evoque has greater glamourpuss appeal, but if it were my money, you’d find me at the Disco every time.

Covid-19 is ‘tearing at the guts’ of Irish in Australia. ‘We are trapped here’
3

Poultices: the moist cure-all that came to a sticky end
Real news has value SUBSCRIBE