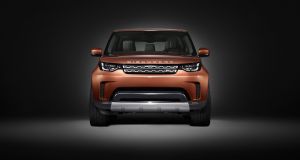 Fans and drivers of the Land Rover Discovery are about to find that their favourite car will get both Range Rover-esque styling and a much more efficient powertrain.

So far, all we’ve seen is the front of the car, which takes on styling very similar to that of the Range Rover Sport – a slim main grille and narrow lights, with a big, upswept air intake beneath the bumper.

Spy pictures of the rest of the car show a tall, chunky shape which copies the angled c-pillar of the smaller Discovery Sport but which does away with the previous models’ distinctive stepped roofline.

The biggest news though will be not the styling but a dramatic cut in Co2 emissions. Partly this will be achieved by moving the Discovery from the current, heavy, steel-based T5 platform to the newer, lighter, aluminium-intensive chassis shared with the two big Range Rover products. That should bring a roughly 300kg reduction in overall weight.

The cut in CO2 will also come from a new engine – a 2.0-litre twin-turbo version of the Ingenium four-cylinder engine already seen in the Discovery Sport and Range Rover Evoque. Thanks to the extra turbo power is boosted to 240hp and 500Nm of torque.

The same engine will also be available in the Range Rover Sport later this year, in which it returns Co2 figures of 164g/km. If the Discovery follows suit, it will see a cut in annual motor tax from €1,200 a year to €570. There will also be the option of a 3.0-litre TDV6 diesel while other markets will get V6 and V8 petrol models too.

It may not lead to a major cut in the price of the Discovery though, as it’s expected to be positioned as a more upmarket vehicle than the current car. Land Rover is also expected to load up the Discovery with high-tech options including a “see-through” bonnet, where underbody cameras display an image of what’s under the wheels to the infotainment screen.

This new Discovery will also kick off a new line-up of Discovery-branded models. There are already rumours of a sub-Discovery Sport model which would be a rival to the VW Tiguan and Nissan Qashqai, while there’s also the possibility of a Discovery Sport Plus or even a low-slung coupe-like version to slot between the existing Discovery Sport and this new full-size version.

We’ll have more details on the car and the range when the new Discovery is revealed in full on the eve of the Paris motor show on September 28th.