The Morgan Plus Four is a mixture of hi-tech and classical hand-made techniques that make it truly unique. It might have more practical rivals, but this is car that oozes charm and brings a ready smile to people's faces. Video: Neil Briscoe 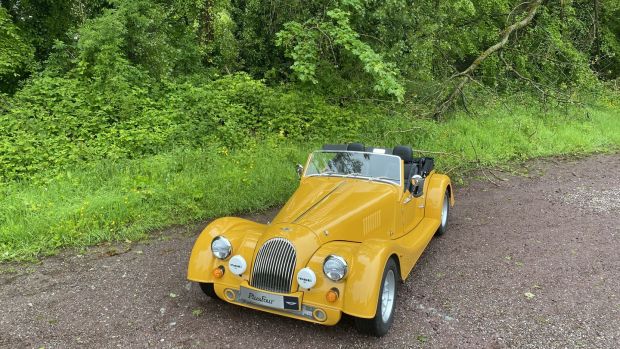 Although prices and specifications are entirely negotiable, in general a Plus Four such as our test car is going to set you back about €100,000.

It was raining, but we didn’t care. If we had managed to organise a test drive a bare 48 hours either side of the actual day, we would have been driving in blazing sunshine.

As it was, we were dealing with driving drizzle being blown along by a self-generated 100km/h wind, jacket done up to throats, hats pulled down low over dripping brows. Even the windscreen – unfettered by either side screens or roof – was feeling the effects, and was as wet on the inside as on the out.

It didn’t matter. If nothing else, the Morgan Plus Four’s bright yellow coachwork provided a pleasant ray of light on an otherwise murky day, and no amount of drizzle nor low, scudding cloud across the Blackwater valley could put a dampener on the day.

We were in the Blackwater valley because so too is Edgewood Automotive. Run by former Saab dealer Wayne McCarthy, Edgewood is a classic-car dealership which has now taken on official Morgan duties, acting as the classic sports car brand’s only Irish agent. It is, admits Wayne, a labour of love, but clearly one with potential – already this year he has had to sell a demonstrator car to a customer who just wouldn’t take no for an answer.

What is a Plus Four? It’s not quite the oldest name in Morgan’s catalogue – that would be the 4/4, which dates back to 1936, but the Plus Four (or Plus 4 as it was originally, numerically, known) dates back to 1950 and has been in almost continuous production since. It has always stuck with, essentially, the same style – those swooping wings, headlights sitting just proud of the bodywork, the bobbed tail with either a spare wheel or a chrome luggage rack atop. Instead of electric windows, the low-cut doors get removable side-screens.

For decades, the Plus 4 used the same, basic chassis and body construction – a ladder-type steel chassis, with a hand-made aluminium body formed over a frame of strong, but light, ash wood. Well, in 2020 all that changed, and quite dramatically. The Plus Four (note the change in nomenclature) finally did away with that old ladder chassis and introduced what Morgan calls its CX platform. First introduced in 2000, in the V8-engined Aero 8 model, the CX platform is really quite similar to that used by Lotus and Aston Martin – a extruded aluminium chassis, with its components bonded and riveted together, aerospace style.

It’s exceptionally strong and exceptionally light – take away the engine and bodywork and the Plus Four’s alloy underpinnings would weigh a mere 97kg. On top of that, Morgan places its traditionally-styled and traditionally-made body. There is still an ash frame beneath that hand-formed aluminium (ash being strong and light, and as with all wood technically a composite material) and the glorious waterfall shape of those front wings is still measured as much by eye and slide rule as anything else. As Morgan points out, it takes: “9,360 minutes of rare applied skills and labour” to build one.

Under that endless, evocatively louvred bonnet sits another slice of surprising modernity. Over the years, the Morgan Plus Four has used engines bought in from the likes of Standard-Triumph, Rover, Ford, and even – briefly – Fiat. Now though, it uses a BMW 2.0-litre four-cylinder turbo petrol. Its bigger, wider, faster brother, the Plus Six, uses a BMW 3.0-litre straight six, and that makes Morgan one of the very, very few companies that the Munich meisters will allow to use their precious powerplants.

The Plus Four’s engine is basically that of the BMW 330i, but here it’s in 255hp trim, with 400Nm of torque. Well, 400Nm of torque assuming you’ve specced, as has been done for our test car, the optional eight-speed automatic gearbox. If it’s the six-speed manual you want, then you’ll have to accept a drop in torque to 350Nm. Not that this matters much – while 255hp might not sound like an awful lot these days, the Plus Four’s light alloy construction means that it weighs a mere 1,009kg dry. Or slightly less than a basic Ford Fiesta.

So that BMW four-pot is enough to shove it to 100km/h from rest in just 4.8secs, which is ridiculously quick for something that looks like it rolled out of the pages of a PG Wodehouse novel. What would Jeeves say? Mr Wooster’s Aunt Agatha would be pleased with its economy though – that light weight means you can easily top 6.5 litres per 100km when slouching around, and it has relatively trim CO2 emissions of 159gkm. Bertie won’t be needing as much of a stipend this year, Auntie.

With the Safari Yellow paint setting just the right tone of brightness, we slide into the interior, or perhaps cockpit really is the most apposite word – it does feel somewhat like climbing aboard a Tiger Moth, right enough.

Inside, sat on narrow but surprisingly comfy seats, there’s an incongruous mix of new and old, with the tiny, flat windscreen and its three tiny windscreen wipers, contrasted with the little digital screen in front of the driver, and the BMW-sourced automatic selector with its paddle-shifters behind the small wheel.

That wheel sits way down in your lap, while your legs are stretched right out, deep under the scuttle, to reach the pedals. Ahead, over those louvres, wings and the little bulges for the headlights, is one of the most evocative views in motoring, even allowing for the drizzle.

The BMW engine fires smoothly on a shove of the starter button, and if its note and timbre are a little uninspiringly modern (and you do kinda yearn for the more characterful bark of those mid-1980s Plus 4s with a Fiat twin-cam) you soon simply don’t care. Partially that’s because most of the engine noise is drowned out by the wind whipping past the windscreen’s delicate chrome surround, but mostly because you’re having too much fun.

The power steering is light enough that you don’t actually need to use the cut-off doors to get your elbows out for leverage, but it’s way more fun if you do (in fact, at a halt, you can just about lean out and brush your fingertips on the road below). There is enough feel and feedback from that steering to give you lots of confidence pushing into even damp and drippy corners, but you do have to recalibrate your brain a bit.

You see, you’re sitting way, way back from the front wheels, with your backside pretty much in line with the leading edges of the rear tyres, so you’ve got to relearn how to correctly point and aim the car. Eventually, you learn to use the gap between the headlight bulge and wing like the gunsight of a Spitfire, aiming slightly ahead of where you need to be, so that by the time everything has happened, you’ve arrived where you aimed.

The second recalibration is to realise that the Plus Four’s ride is actually quite surprisingly soft. That’s good news, because it means that even rural Cork roads won’t punish your spine in the way they would have done with an old ladder-chassis Plus 4, but bad – or at least very different – because it means the Plus Four is way more sensitive to throttle inputs than you expect. Getting on or off the power on the way into and through a corner elicits significant weight and balance changes, and you can feel the car tipping gently from front to rear axle as you flex your foot on the pedal.

Eventually, you learn to exploit this, and when you do (and once you’re used to the fact that the brake pedal needs a heftier shove than you’d think) the Morgan becomes an agile, tantalising delight. It is ridiculously good fun to drive, but you cannot relax and sit back – it won’t cruise like a more modern design, and you’ll need constant adjustments at the tiny wheel to keep a straight course.

Given the modernity of the chassis and engine, you have to assume that Morgan deliberately engineers this handling style in, simply because that’s how it likes to set up its cars.

Better than any of that, though, is the way other people react to the car. Although prices and specifications are entirely negotiable, in general a Plus Four such as our test car is going to set you back about €100,000.

If we had been driving any other €100,000 performance car, the reactions would have been very different. In a BMW M-car or a Porsche Boxster or Cayman, people probably wouldn’t have even glanced up. In a Ferrari or Lamborghini, those glances would have been ones of envy and begrudgery.

In a Morgan, though? You get broad smiles of delight, people waving happily, and coming over to chat if you stop. It is a car that brings as much pleasure to those seeing it being driven, as to those doing the driving. Is it an expensive toy? Of course it is – but it’s an utterly charming one.

Perhaps, given the way things are right now, a little dip back into the past is rather reassuring. As Spike Milligan put it, happiness is a yesterday thing.

Power: 2.0-litre turbo petrol engine putting out 255hp and 400Nm of torque with an eight-speed automatic transmission and rear-wheel drive.

Verdict: Of course it’s an expensive toy, but it’s charming and both surprisingly capable and fast.