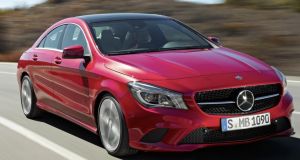 A small four-door coupé from Mercedes-Benz sounds like a niche model. Yet there’s nothing niche about the ambitions for CLA in the eyes of Mercedes. The premium German brand needs its small cars to start delivering sales and CLA is seen as key to unlocking a new generation of owners.

Mercedes, particularly its boss Dr Dieter Zetsche, has been criticised by shareholders for failing to match the sales growth of German rivals BMW and Audi. That remarkable rise by its Bavarian rivals is partly down to overhauls of their smaller car fleets. Audi’s A1 sales may not have matched the hype, but cars such as the A3 and the smaller SUVs have introduced new customers to the brand. Similarly, BMW has witnessed impressive growth from its 1 Series and X1 models internationally. Often nimble and sporty, these models are introducing a new group of buyers to the premium brands.

Mercedes, on other hand, has seen its small car entrants – the previous A-Class and B-Class – largely regarded as functional transport for empty-nesters and older motorists seeking to downsize. The problem was that its small cars lacked allure.

That’s about to change. Mercedes wants to get down with the youth. The face of the new CLA is the actor Kate Upton, while the rapper Usher was on hand to launch the car in Geneva last week. Executives have binned the traditional suit-and-tie image, sporting instead jeans and open-necked shirts. Launches are more similar to nightclub parties than stuffy golf club dinners. Orders from on high decree that the company’s message must be Facebook-friendly and appeal to the Twitterati. Even Dr Zetsche, the genial German with proven marketing savvy from his time reviving Chrysler in 2005, is eager to show he’s in sync with the Y generation. For these buyers, the moustachioed Mercedes exec answers to “Dr Z”.


[CF413] Bold statement
[/CF413]Will it work? Can the establishment brand gain some street cred? The jury’s out on that, but the new A-Class and CLA make a bold statement of intent.

Sharing the same new platform as its hatchback sibling, the CLA is the second of four new small cars on the way. Next up will be a small SUV-styled crossover, aimed at competing against the likes of the BMW X1. After that comes a “shooting brake” (estate-like version) of the A-Class.

Mercedes desperately needs to expand its model range if it is to give chase to BMW and Audi. Zetsche’s promise that Mercedes will be the biggest-selling premium brand by 2020 lacks credibility without it. Even with these new models on the way, the promise seems extremely ambitious.

So to the latest new model, the CLA. First impressions are impressive. The car aims to mimic the look of the critically-acclaimed CLS four-door coupé. Its profile is perhaps not as sleek, given that there is limited room for sweeping rear lines. Yet it still retains a coupé profile, and achieves a remarkable aerodynamic rating of 0.22. In layman’s terms that means it’s the most aerodynamic small premium car on the market, and that adds up to better fuel economy in the end.

As you might expect, entry and exit from the back is a bit of a pain for adults given the low lines of the rear pillar. Yet it’s arguably easier to access than most three-door models where you have to slide over a folded front seat to get in. Headroom is also tight, and adults over six foot will be running their heads off the roof lining.

Up front the look is similar to the new A-Class in terms of features and controls. The fit and finish is not quite as good as on the Audi A3, but it’s certainly closer to the premium benchmark than Mercedes small cars have come in a decade.

As with many small cars, the focus is on fuel economy, so all versions come with start-stop and eco mode. The problem is that this eco-minded focus doesn’t really suit the CLA’s sporty character, so owners should opt to engage sports mode and switch off the eco mode from the moment they turn the key.

The engine range coming to Ireland this summer will start with the CLA 220 CDI, a 2.2-litre diesel putting out 170bhp. It’s well suited to the car, with decent torque, and is offered with Mercedes’s dual-clutch seven-speed automatic transmission, which shares much of the software with the brand’s SLS supercar.

In September the smaller 1.8-litre diesel 136bhp CLA200 CDI will arrive, likely to be the biggest seller in the range with a price tag of just over ¤30,000. However, those lured in by the coupé styling, the premium badge and the relatively attractive pricing should not ignore the CLA 180 petrol that’s also pencilled in for Irish sales. With a price that’s likely to be ¤2,000 lower than the 200 CDI diesel, for those who do lower mileage it’s the most economical buy and an engine well suited to the car. While we drove both petrol and diesel CLAs during our testing, it was great to get back into a petrol-engined coupé again after the diesel dominance in all things automotive of late.


[CF413] Nice balance
[/CF413]The CLA also impresses on the road. The ride is a nice balance of comfort and control, and while it can soak up the rougher surfaces, it hunkers down on tight, twisting corners. Being front-wheel drive, the CLA lacks a little of the cornering aplomb of its larger sibling, tending towards understeer when pushed too hard into difficult bends, but its overall balance and poise is in keeping with the coupé looks.

The combination of four doors, coupé styling and efficient engines, along with a competitive price tag, should see the CLA succeed even in the recession-hit Irish market. If rear space is for children – or rarely used for long trips – then I could see the CLA offering a tempting alternative to buyers of larger rivals including the BMW 3-Series and Audi A4, but also some motorists previously considering a top-end hatchback version.

The CLA is not going to singlehandedly close the gap between Mercedes and its arch-rivals, but it’s a major step in the right direction. Don’t expect to see showrooms filled with twentysomethings, but there may well be more trade-ins from BMW and Audi due to its arrival. The CLA is good enough to win them over to the brand.


FEATURES:
Five lines and specifications packages are available. Optional is a large panoramic sliding sunroof. Driver assistance systems that include standard-fit drowsiness detection and radar-based collision prevention and adaptive brake assist technology that will help protect drivers from collision at speeds from as low as 7km/h.