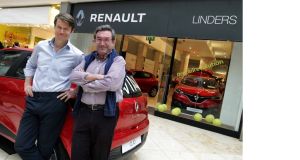 Paul Linders and his father Joe at the new store in the Swords Pavilions shopping centre.

We had thought that Hyundai, which has been mulling the idea for at least six months, would be the first brand in Ireland to open what’s being called a ‘virtual’ dealership - a unit in a shopping centre that’s high on tech but low on forecourt space, in an attempt to bring car buying closer to the public.

Actually, the first to the punch seems to have been Volkswagen, in the guise of Pierse Motors, in Clonmel, Co Tipperary. However, the first in the Dublin metropolitan area, has just been opened by Linders Renault and Dacia, in the Pavilions Shopping Centre in Swords, just a short hop from Dublin Airport.

The east coast and the slopes of Slievenamon may have been the first to see such a thing in Ireland, but the shopping centre dealership is fast becoming the future of selling cars.

Dealer Principal Paul Linders said: “The concept of the car store seems like a natural progression for us. In any business you need to innovate to survive and the internet has played a key part in revolutionising how Irish people shop for cars. We are in the process of opening our third dealership Linders Renault & Dacia Swords Turvey just up the road and in the process, we spoke to a lot of locals while deciding about where to open. While we knew that the area had a large and growing population for an outlet to service, we didn’t foresee the number of people that told us they would be interested in seeing an alternative to the traditional garage in the area. So, we simply listened and when we thought about it, it made sense.

“That said we know the importance of catering for those who prefer the traditional route. With that in mind, Linders are set to expand their traditional motor dealerships with a brand new branch in Swords Turvey this June, a sign we are waving goodbye to the recession in the rear view mirror. I won’t miss it.”

Linders will of course be able to utilise its nearby traditional dealer premises to deal with trade-ins, deliveries of new cars and servicing but the move away from traditional, out-of-town glass palace dealerships has been predicted for some time, and has been pioneered by such as Tesla in the US and Hyundai in the UK. The idea, unsurprisingly, is to give buyers a less pressurised buying experience, and allow them to browse both physical display cars and connected tablets and wall-screens much as they would rifle through a rack of clothes in Dunne’s.

And it seems to work. Taking the pressurising sales aspect of traditional dealerships out of the equation has opened up broad, sunlit uplands of new customers to the pioneers of this technique. The Hyundai-Rockar store in the Bluewater shopping centre, near London, has been a massive success in its first year, drawing 100,000 visitors to the physical store. Around 1,000 sales are forecast for the Rockar outlet each year, which may be only 0.5 per cent of a conversion rate, but that’s still around double the number of annual sales which an average UK Hyundai dealer would get. More significantly again, a whopping 95 per cent of those customers are new to the Hyundai brand, and they’re significantly younger - with an average age of 37 compared to the 54-year-olds who visit the trad dealerships. Simon Dixon, CEO and founder of Rockar, said: “We’ve already had over 100,000 people visit the Rockar Hyundai store in Kent’s Bluewater Shopping Centre since its opening just over six months ago. When looking at the success of Rockar so far, it is clear that challenging the historical approach to car buying is the way forward.”

As car ownership moves closer and closer to the model used for buying and using mobile phones (buy, use, upgrade, continue) these storefront dealers are likely to become more and more prevalent, with servicing and the like relegated to the cheaper out of town premises, and with the promise of pick-up and drop-off courtesies for when you’re leaving your car in for any work to be done.

Analyst Sarwant Singh, writing in Forbes magazine, has predicted that “this new breed of urban dealerships is expected to record an extraordinary high number of visits and become a one-stop-shop aimed at providing a unique brand experience. The digital flagship store will not only be a platform to experience or buy vehicles during your ‘lunch break’, but also to sell vehicles and to drive leads into conventional dealerships. The dealership network as we know it now will change dramatically within the next few years.”