Lambo presents first SUV but only with technical difficulties 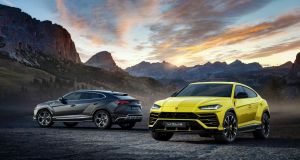 Lamborghini’s senior executives were left red-faced as the glossy, high-tech presentation in Bologna, to reveal the supercar makers’ first modern SUV, broke down half-way through. Chairman and chief executive Stefano Domenicalli had to take to the stage early, and have the cars simply driven on stage without the accompanying fanfare. Italian Prime Minister, Paolo Gentiloni, present at the event, helped Domenicalli to try and laugh it off, saying that “it’s like a thunderstorm at wedding, it’s actually good luck.” Lamborghini must be now desperately hoping so, and not a bad omen.

The Urus is vitally important for Lamborghini, which has invested in a vast (and claimed to be carbon-neutral) new factory in which to build it. Domenicalli claimed that the big SUV will double Lamborghini’s sales volume by 2019, which would mean raising sales to around 7,000 vehicles a year. “From now on, Lamborghini will change its position in the automotive industry. This is the point of no return for us” he said. “The Urus fits perfectly within the Lamborghini family as a high-performance car. It is the culmination of intensive development and passionate skill to create a new brand of bull: a super-SUV that transcends the boundaries of expectations and opens the door to new possibilities, for both our brand and our customers.”

The Urus is based on the same MLB Evo platform that also underpins the likes of the Bentley Bentayga, Porsche Cayenne, and Audi Q7. For now, only one engine is on offer - a 650hp twin-turbo V8 4.0-lite unit, which allows Lamborghini to claim bragging rights for the Urus as the fastest and most powerful SUV you can buy. It will do the 0-100km/h dash in a claimed 3.6secs, and carry on to a top speed of 310km/h. All that performance is reigned in by what the company claims is the most powerful braking system in series production, using 440mm ceramic-composite discs.

Driving all four-wheels, of course, via an eight-speed automatic transmission, the Urus can send as much as 87 per cent of its engine’s power to the rear wheels, although normally it will run in a 40/60 front/rear split. Suspension is by air chambers at all four corners, which allows for adjustable ride heights, and Lamborghini has included both torque vectoring on the rear wheels, and rear wheel steering too, to try and ensure that the Urus is as agile on race-track as goat-track.

There are six driver-selectable driving modes, via a rather tempting button on the big, y-shaped dashboard called the ‘Tamburo.’ You can choose from Strada (street) for normal driving, Sport and Corsa for serious high-performance stuff, and then some off-road modes - Neve for snow, Terra for general off-roading, and Sabbia for sand. There’s also an ‘Ego’ mode which allows you to fiddle with individual settings yourself.

It will certainly be the most practical Lamborghini since the short-lived and ill-fated LM002 off-roader of the 1980s, which was originally designed for the Italian military. There’s a 616-litre boot, and the rear seat can be either a three-seat bench, with ISOFIX points for child seats, or tow individual chairs. Up front there are 18-way powered and heated seats. Lamborghini says that the Urus (named for an ancient, extinct ancestor to modern bulls) is it’s first car “to involve not just the driver, but also their families.”

Does it look any good though? It’s rather hard to say, for now, as we’ve only seen it indoors, under lights, but to be honest, for a Lamborghini SUV that’s going to cost the thick end of €350,000 to import here, it’s a touch underwhelming. Maybe that’s because Lambo spent so many years parading the concept car around that we’ve become inured to it. Maybe it’s because of the inevitable watering-down of OTT concept car details for production reality. Or maybe it’s because it actually looks a bit clumsy. The rear looks like a melding of Porsche Panamera and Seat Leon, while the little grille ahead of the front doors looks appallingly stuck-on. A practical Lamborghini it may be, but it’s definitely lacking in the drama of its atomic doorstop stablemates.

“The Lamborghini Urus is a visionary approach based on the infusion of Lamborghini DNA into the most versatile vehicle, the SUV. The Urus elevates the SUV to a level not previously possible, the Super SUV. It is a true Lamborghini in terms of design, performance, driving dynamics and emotion as well as drivable every day in a range of environments,” said Domenicali, as he introduced the car. Hopefully it will look better in the flesh, and be rather more robust and reliable than its own presentation.